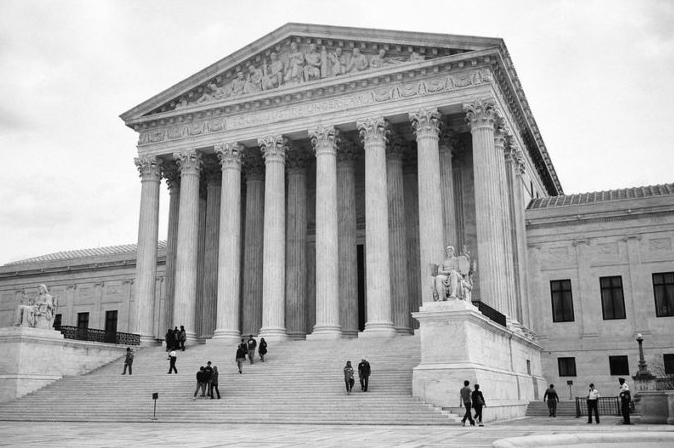 Donald Trump will likely go down in U.S. history as one of the worst, if not most corrupt, presidents.

Sadly, his reactionary legacy will live on much, much longer than his one term in office.  His three Supreme Court appointments – Neil Gorsuch (2017), Brett Kavanaugh (2018) and Amy Coney Barrett (2020) – have joined with the Court’s two arch conservatives — Clarence Thomas and Samuel Alito – and one moderate — John Roberts – to forge the most conservative Court since the 1930s.

In a ruling on what is known as the “shadow docket” as opposed to the traditional “merits docket,” the Court ruled that the Texas “Heartbeat” Act (Senate Bill 8) was Constitutionally permitted.  The bill outlaws abortion once a fetal heartbeat is detectable, which typically occurs in the sixth week of pregnancy.  In 2013, North Dakota passed a fetal heartbeat law that was, in 2015, ruled unconstitutional by the Court under Roe v. Wade (1973).  Other heartbeat bills – e.g., Georgia, Mississippi and Ohio – are on hold.

The Court’s ruling with regard SB8 effectively overturns the landmark Roe decision of a half-century ago.  It demonstrates just how powerful the conservative movement is at both the state and federal levels.  So, this raises a critical question: While the Supreme Court is at it, what other critical or landmark prior decisions could it overturn?

A quick review of some of these possible decisions suggests just how reactionary an aggressively conservative Court could be.

So, why not “revise” the ruling and give states power over interstate commerce?

The Court ruled that Congress could legalize slavery and prohibit African Americans from suing in federal court.

So, in an era of gig-work neo-slavery, why not “revise” the ruling and deny rights to those considered “un-American,” whether defined by race, gender, national origin, religion or job.

The Court upheld the notion of “separate but equal” segregation laws in states.

So, in a postmodern world, why not “revise” the notion of “separate” to all those who challenge white, conservative powers-that-be?

The Court originally ruled that the concept a “clear and present danger” threatening U.S. security violated the principle of free speech as protected by the First Amendment.

So, in a nation facing an endless “war on terror,” why not surrender First Amendment protections to defend “national security”?

So, why, in the postmodern 21st century, can’t “separate educational facilities” be “inherently” equal?

The Court ruled that states cannot nullify decisions of the federal courts (e.g., Alabama refused to follow the Brown v. Board of Education decision.)

So, why can’t a state nullify a federal act if a state legislature — backed by state-rights activities — oppose it.

The Court ruled that illegally obtained material cannot be used in a criminal trial.

So, given the police’s need to pursue all illegal activities, why shouldn’t all relevant material – no matter how it is obtained — be used in a prosecution?

The Court ruled that prayer in public schools violated the First Amendment.

So, in schools with parents of students having a strong religious outlook, why not permit prayer in school?

The Court ruled that states must meet a Constitutional standard for voting that doesn’t violate the Equal Protection clause of the 14th Amendment, thus instituting the notion of “one person, one vote.”

So, why not reconceive voting as a privilege that should be restricted to meet higher standards, whether based on age, literacy, gender, race or personal wealth?

The Court ruled that an individual charged with a felony and is unable to pay for a lawyer must be provided representation without charge.

So, why should a community have to pay for someone’s legal representation?

The Constitution ruled that the personal right to privacy permitted married people to acquire contraceptive devices.

So, now that Roe had been restricted to protect the fetus, why should couples or individuals have a right to conceptives?

The Court ruled that the Fifth and Sixth Amendments require police to inform individuals in custody that they have a right to remain silent and to have an attorney.

So, in order to contain crime, why – for those who’ve been arrested – shouldn’t silence be a sign of guilt and, thus, there’d be no need for a defense attorney?

So, why, under state rights, shouldn’t states prohibit “unacceptable” marriages based on race?

The Court held that students do not “shed their constitutional rights to freedom of speech … at the schoolhouse gate.” Thus, students could engage in non-disruptive political actions like wearing black armbands to symbolize anti-war political protest.

So, why couldn’t the Court restrict all forms of “free” speech to outside the school building?

The Court rules that a president cannot use executive privilege to withhold evidence from criminal trial.

So, why, in a case involving former Pres. Trump’s business practices, should he be granted executive privilege?

Regents of the University of California v. Bakke (1978)

The Court ruled that universities may use race as part of an admissions decisions so long as “fixed quotas” are not used.

So, if universities can use race, why can’t they use “unfixed” quotas?

The Court ruled that offensive speech — such as flag burning — is protected by the First Amendment.

So, what if speech is so offensive – such as calling for the impeachment of a president — that it is not protected by the Constitution?

The Court ruled that a person had a right to reject life-preserving medical treatment — their “right to die” – allowing the withdrawal of treatment with clear and convincing evidence that this is what the patient would have wanted.

So, in adhering to the primacy of the living person as codified in the Texas decision to restrict Roe, why should anyone have the “right to die”?

The Court struck down state laws that prohibited sodomy between consenting adults.

So, why – in a Christian country – should anyone have a right to engage in sodomy or other homo-erotic acts?

The Court ruled that it is cruel and unusual punishment to execute persons for crimes they committed before age 18 in violation of the Eighth Amendment.

So, what if the youth commits a “terrorist” act or a politically-motivated mass murder?  Shouldn’t s/he be executed?

The Court ruled that the federal government must provide benefits to legally married same-sex couples.

So, why, if same-sex couples are prohibited from marrying, would benefits be provided?

The Court ruled that same-sex marriage is legal in all 50 states.

So, why, in a Christian America, are same-sex marriage permitted?

The reactionary Christian right now controls the Supreme Court and will likely continue to do so for the next generation or more. Given this power, the face of the American legal system will change and, with it, social life.

Change in social and personal life could have any number of consequences — the reestablishment separate but equal, ending of “one person, one vote,” blocking criminal safeguards, restricting freedom of speech and reshaping sexual life and relations (e.g., access to contraceptive, homosexual and interracial marriage)

Today’s most conservative Christians may well envision returning America to a life invoking the glory – gory! – days of the early Puritan colonist. Like the days of old, such reactionary “originalists” could redefine illegal act to include premarital sex (fornication), extramarital sex (adultery), sodomy (homosexuality) and interracial sex (amalgamation). And they could specify the two worst offenses to be bestiality involving young men and sexual witchcraft among older women.

The Puritans landed in New England in 1620 and, for the first quarter-century of settlement, occasional accusations of witchcraft were raised, but no one was executed. However, during the following half-century, 1647–1693, over 200 people were accused of witchcraft and about 30 were executed. Most of these alleged witches were women who came from more than 30 communities in Connecticut, Massachusetts and New Hampshire, including Easthampton, Long Island, now part of New York. Following the notorious Salem trials of 1692–1693, convictions and executions for witchcraft essentially ended.

Other forms of “originalist” law-and-order rules were applied to the newly-settled America.  In 1662, the Virginia Assembly established the first law against interracial sex. In 1691, it passed a much stiffer law banning “negroes, mulattoes and indians intermarrying with English, or other white women, [and] their unlawful accompanying with one another.” Other colonies followed with similar bans, as exemplified by the North Carolina colony that, in 1715, adopted laws prohibiting interracial marriages.

Three-plus centuries later, America elected its first male president of mixed-race origin, followed a few years later by a female vice president, both children of once-scandalous interracial relations.  Who know how long before such people will, one day, be barred from holding public office.

(David Rosen is the author of Sex, Sin & Subversion:  The Transformation of 1950s New York’s Forbidden into America’s New Normal (Skyhorse, 2015).  He is a featured writer at Counterpunch.org and can be reached at drosennyc@verizon.net; check out www.DavidRosenWrites.com.)