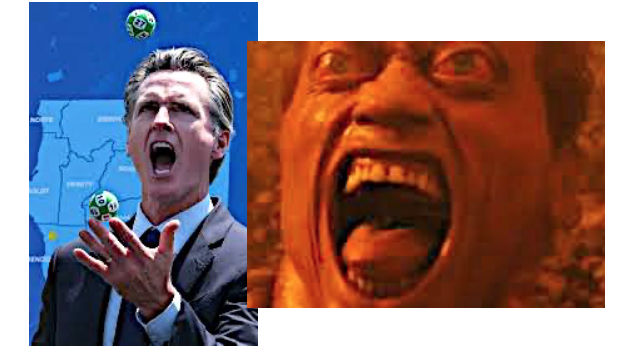 Newsom might follow former governor Gray Davis in being recalled for both being too beholden to special interests, as well as smashing the hopes, dreams, and opportunities of middle-class Californians who SHOULD be the priority of Sacramento. He also might follow in the footsteps of Schwarzenegger for selling out to the powerful special interest elites that have made California (and, in particular, the Sacramento ruling class) unlivable.

Enter SB 9 and SB 10, which would pretty much smash the ability of proper zoning for both single-house and any other neighborhoods for the otherwise-virtuous and otherwise-venerable goal of creating more affordable housing for the ever-burdened middle class...

...and a middle class who too often are forced to throw up their hands and flee the Golden State. No house, no decent educational system, no affordable college, no affordable utility bills, no affordable cost of gasoline to get to work...and any self-respecting person has to consider fleeing for their lives and the lives of their families.

And the efforts of the so-called "liberal" and "pro-underprivileged" Democrats who've taken over Sacramento? No better than any profits-at-all-costs Republicans who have rationalized laws and environmental science for the purposes of "principle".

And those who've taken down Trump and just about any other GOP leader in Sacramento, and who've placed the far-left Democrats in absolute power? Now they're horrified that Governor Newsom, whether he is recalled or not, will sign those bills after the September 14th recall election, and which he has until October 10th to sign these aforementioned bills.

There really is no problem or shame in being an ardent Democrat...but isn't it reasonable to consider electing BETTER Democrats who are as crazy-left and bringing down the Democratic Party as much as the far-right has brought down the Republican Party.

Fervent "homeless advocates" passing laws, breaking laws, ignoring laws, and raising taxes to help the homeless...while ultimately benefiting lobbyist-connected and inappropriate developers who only care about their profits while DECREASING homeless housing and services? Well, we see that a lot here in the Golden State.

Fervent "affordable housing advocates" passing laws, breaking laws, ignoring laws, and raising taxes to help the middle class...while ultimately benefiting lobbyist-connected and inappropriate developers who only care about their profits while DECREASING affordable housing and catering to high-end housing for Big Tech. Well, we that a lot as well in the Golden State.

And for those who decry far-right "anti-vaxxers" who ignore the science and spread the biologic ills of COVID-19?

Isn't it just as awful for far-left "anti-single-family housing" zealots to smash environmental laws (to say nothing of the laws of biology and physics) to throw up densified condos and apartments where single-family homes used to be and worsen our air, water, and necessary infrastructure crises?

So... go ahead and support the Democratic Socialist of America who've taken over local and state government agencies and political power in the Golden State ("Fool's Gold" is it now?), shall we?

Maybe Governor Newsom will not entirely lose his mind and forever alienate middle-class and middle-of-the-road Californians, cities, and counties (as the Legislature in Sacramento has done), and veto SB 9 and SB 10.

Or maybe Governor Newsom will sign the bills under the auspices of "affordable housing" only to take on a lobbyist position for cruel, ruthless developers (as the Legislature has done) who don't give a damn about real affordable housing and the middle class...whether he is recalled or not.

But this fact is for certain: if Newsom signs SB 9 and SB 10, it may be the last straw for the middle class--both Democrats and Republicans--and ensure a "total recall" because he will be as hated as Gray Davis and Arnold Schwarzeneggar will forever be.