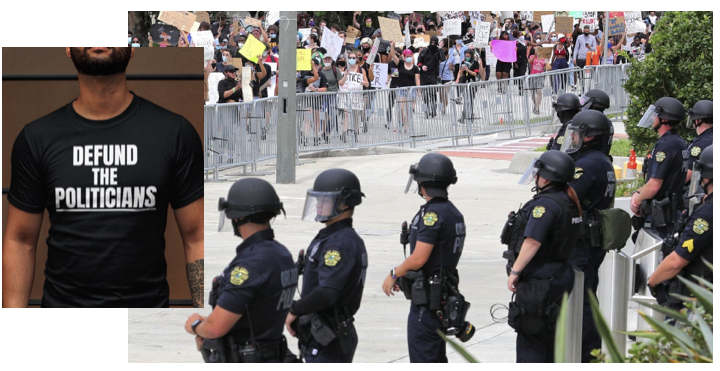 HYPOCRISY REIGNS-As law enforcement officers across the country don uniforms and equipment to face another shift, it's difficult to imagine their heightened sense of defensiveness.

In Afghanistan, 13 U.S. troops were killed on August 26 while serving and protecting the vulnerable. Due to the disastrous decisions of the president, military leaders, and his advisers, lives were lost — yet no cry of "defund the politicians" carries the sympathy of the left and its scribes in the media. While police officers can employ lethal force, it seems all but ignored that many political leaders also wield the power to use lethal force.

As police officers struggle with illegal weapons on the street, President Biden just handed military-grade weapons to the Taliban. It's one thing for a street thug who hates the police to possess a firearm, but it is an entirely different scenario when America's sworn enemy receives tens of billions in munitions and weapons from a feckless politician.

If the mayor of Chicago's cry for gun control contains legitimacy, where are her stern words for Joe Biden arming terrorists? For decades, the Democrat party has vilified gun-manufacturers and gun-owners, only to have its leader provide state-of-the-art weapons to committed terrorists. What's next for their hypocrisy?

On a related note, one can't also help but wonder how many of the planeloads of unvetted Afghans will make their way to the Windy City — or other leftist enclaves. Will terrorism once again overwhelm our cities? If so, one can be assured that police officers will be first on the scene, while leftists backing the disastrous immigration policies remain in power.

It's only matter of weeks or even days before the world learns of the first casualties killed with weapons provided to terrorists by the Biden administration. Will Joe face accountability commensurate with what police officers can expect for a shooting? Hardly.

Police officers are held to a higher justice and public opinion standard than many politicians. California congresswoman Maxine Waters enjoys enormous freedom to incite violence and hateful rhetoric. She pays no price. If a police officer stated a fraction of her same rhetoric, that officer could expect disciplinary action and even criminal charges of hate speech. From the White House to Gracie Mansion to Logan Square in Chicago to the District attorney's office in LA, the Democrat party continues to build a solid platform against law and order.

The average police officer in this country annually earns less than $60,000. Unlike the politicians who can recklessly order them to hostile environments, law enforcement pay a much heavier price. With an increasing number of suicides and PTSD cases among law enforcement, precincts across the country feel the oppressive culture incited by irresponsible politicians and media. Other than those close to Hillary Clinton, how many stories appear in the news about those in the political world committing suicide?

Every serviceman in proximity to the bombing in Kabul will most likely feel the life-altering effects of PTSD.

Will Joe Biden, his advisers, or even the media do anything?

While each police officer racing to gunfire or other traumas must deal with the residual effect on his mind and body, it remains doubtful if the media who reshape those stories will give it a second thought. "It's interesting when people die," wrote Don Henley, revealing his disgust with the media sensationalism of negativity in his 1982 hit song.

Four decades since that song's release, the media megaphone of the political left has mushroomed to deafening levels — so much so that "defund the police" obscures the need to hold politicians accountable.

From hyper-race-woke ideals to sexual identity training, law enforcement must comply with the cultural whims of the moment. Yet numerous political figures enjoy long careers filled with abusing those under their power. In the wake of the former governor of New York's scandal, he violated (and evidently skipped) the very sexual sensitivity training he implemented. His abuse allegedly included one of the state officers required to take the training he ignored. If it weren't for double standards, some politicians would have no standards at all.

Law enforcement all too often pays an exorbitant price for the flagrant abuses and unwise choices of political leaders. Sadly, a fawning media establishment seems all too eager to cover for its favorite team while throwing first responders under the bus.

Approaching the 20th anniversary of 9/11, we all remember a time — however brief — where we honored the police in this country. Officers across the country expressed gratitude for the support and worked hard to maintain the respect. In every profession, there exists those with poor behavior. But law enforcement officers in aggregate remain decried and singled out for the sins of a few.

The political left, however, seems to contain few who maintain a love of this country and a respect for the power entrusted to them. Drunk with that power, they often rashly implement policies and programs with devastating consequences to all but themselves.

Arming the Taliban soars to the top of that list of horrific actions by unrestrained politicians.
Justice in this country will remain elusive until every person in power, particularly in Congress and the White House, frets over his job security and media scrutiny in the same way a precinct cop does every day.

(Michael A. Letts is the CEO and Founder of  In-VestUSA, a national grassroots non-profit organization that is helping hundreds of communities provide thousands of bullet-proof vests for their police forces through educational, public relations, sponsorship, and fundraising programs. This article was first published in American Thinker.com.) Prepped for CityWatch by Linda Abrams.