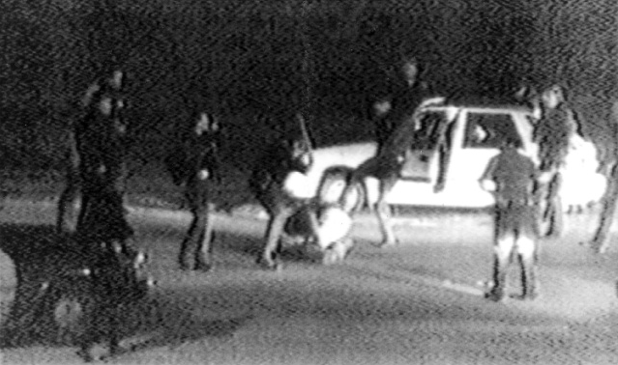 GUEST WORDS--Around midnight on March 3, 1991, four Los Angeles police officers stopped Rodney King, a 25-year-old black man, for speeding or driving drunk or a minor traffic violation or maybe just for being black, and savagely kicked, tasered, and beat him with batons over 56 times.

The assault lasted several minutes: King kept getting back up, so they kept beating him, says one LA resident today, "like a runaway slave" The brutality by the police department wasn't unusual; what was new, in the days before cell phones, was that a neighbor filmed it all from a nearby building, and gave the footage to a local TV station.

Says one veteran of the incident, "The whole world saw it." King survived, though his skull was fractured and he suffered permanent brain damage. “It was like being raped, stripped of everything, being beaten near to death there on the concrete,” he recalled.

About a year later, a nearly all-white jury acquitted all four cops on charges of assault and excessive force, and the long-simmering city erupted in uprisings that lasted five days, killed over 60 people, and destroyed or damaged more than a thousand buildings.

Now, as then, black residents refuse to call them riots because they were an organic response to state-sanctioned violence, and “that is the only way they hear us sometimes.” “People waited for the criminal justice system to make good on its promise to give equal justice," says one, until "that promise (was) so flagrantly flouted by the jury."

"A riot is the voice of the un-heard," says another, paraphrasing Dr. Martin Luther King. “And we still have a lot of voices in South Central LA that are not being heard.” Today, says Quintus Moore, 62, who lived through the turbulence and became an advocate after LAPD officers killed his son and never faced charges, cops still "know they can get away with murder.”

By and large, stunningly little has shifted since Rodney King's assault and the resulting national outrage.

As is common, King was villified as a drug-addled thug; otherwise, the LAPD made small changes - adding body cameras, reining in a police chief who argued black people were dying from police chokeholds because their neck veins were different from "normal people's" - but overall, says an ACLU attorney, “It’s the same old disproportionate stops, targeting, harassment, brutalizing and killing.”

The LAPD continues to use stop and search, traffic stops, false charges and excessive force against black and brown people two and three times as often as against against whites, and just last month officers circulated a grotesque meme mocking George Floyd - proving, says a BLM activist, they remain "a system that put targets on the backs of Black people.”

Their ongoing racism and brutality reflect the same failures nationwide, where black men are almost three times more likely to be killed by police, 99% of roughly 1,000 police killings a year result in no charges against officers, and, writes author Stephan Schwartz, "If you are a black or brown young man, America is like living in an occupied country" - in part thanks to despotic police unions, notes L.A.'s Pastor Cue, who "have associated with evil far too long."

Today, there are daily more videos, hashtags, names to mourn, and the answer to King's plaintive cry of, "Can't we all get along?" is, until real change happens, a resounding no.

California Rep. Karen Bass writes that when she watched the King video 30 years ago, "we thought we finally had the proof we needed to end police brutality." She was wrong: This week, the Senate will vote on her George Floyd Justice In Policing Act, calling for common-sense police reforms; next week, the trial of Derek Chauvin begins. "At some point," she writes, "our nation needs to make a decision about how many more instances of police brutality (we) need to witness before we do something about it."