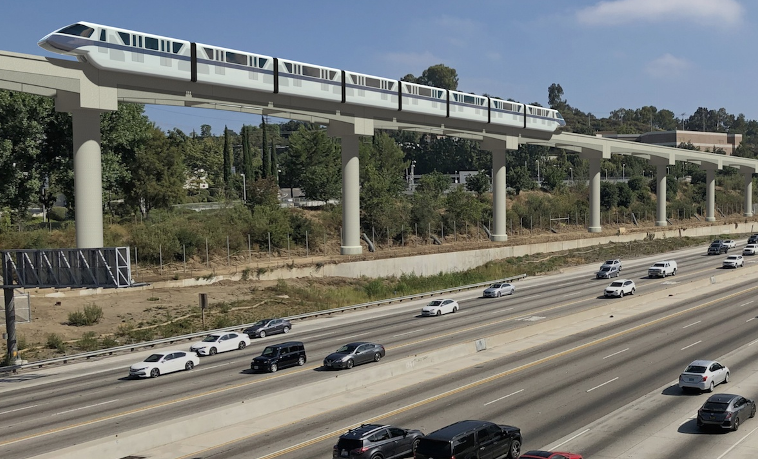 Air pollution in Southern California had somewhat improved back then, but it was still the worst in the nation, and unhealthy. The air quality has improved since 1992, but within the past few years air pollution levels have crept upward, bringing along with it the same health hazards.

With the more dire threats from climate change brought about by global warming, reducing my carbon footprint by driving less has taken on even more urgency. Scientists are sounding the alarm that we are fast approaching a day of reckoning with no return, changed climate wreaking catastrophe.

To push back that day of reckoning, to remove it from the doomsday calendar, changes are needed now to reduce burning oil and throwing ever more carbon gases into the atmosphere.

With transportation being one of the major sources of greenhouse global warming gases, the quickest solution is to drive less, and do that now. My transit riding has reduced because of the COVID-19 pandemic, but I still ride buses, with great care and caution.

But there are signs of hope that the home stretch of returning to a post-COVID (new) normal is in sight. Then I will no longer work from home, and gladly go back to teaching in classrooms, arriving at the campuses by buses and trains.

Shortly after my switch to becoming a transit rider, I began attending meetings about transit, joined grassroots organizations to promote rail and transit, and volunteered for a Los Angeles City Transportation Advisory Committee to advocate for transit riders. Invariably, at meetings were what I call “monorail fanboys.”

I heard the same argument we hear today about the proposed 405 monorail: it would be cheaper to build. (See photo above, rendering by LA METRO.) There was also an attachment to the what the Times called “the shiny new object,” the sense of some glorious future, like “The Jetsons” cartoon.

The monorail support arguments irked me then, and continue today, because they have no basis in the reality of riding buses and trains in Los Angeles. Indeed, after these meetings, mostly in the evenings, the monorail advocates would get into their cars while I hustled down the street to my bus stop. To miss a bus at night could lead to a wait of around fifty minutes. This is the experience of transit riding.

It irks me that non-transit riders, in their car-dominant concept of the world, think that the burdens of a supposedly cheaper monorail over a light rail train or subway should be placed on the backs of transit riders.

The Times correctly brings up the issue of transfers between the stand-alone monorail and the rest of Metro’s rail services, and even buses of all transit agencies. The proposed 405 subway would have one station, maybe two, inside the UCLA campus. This is ideal to get students, administrative workers, maintenance workers, athletes, teachers and professors, medical students, medical techs, and even doctors, directly to the campus.

Monorail advocates would have the riders get off at Wilshire Boulevard, and then take a transfer to the campus via the being-built Purple Line extension which does not go into the UCLA campus. The rider would then need to take another transfer onto a bus to the campus.

This is a complete waste of time for the transit rider, needlessly complicating the far more efficient route of a subway directly into the campus.

Speaking of wasting time trying to fix our transportation problems, the 405 through the Sepulveda Pass, under which the subway would also travel, was recently widened to the tune of over $1.6 billion to alleviate traffic and reduce travel time. This has turned into a failure. Travel times through the pass did not shorten; some say the time has even increased.

It is infuriating to have some kind of fiscal watchdog tell me that to save money I as a transit rider will have to suffer a time wasting, transfer heavy ride on a monorail.

Moreover, monorails are slower than subways. The Tokyo subway has a speed of 50mph, but our own subways in town go 70mph. So in addition to more needed transfers with the monorail, transit riders would waste more time because the monorail is slower.

There is the visual blight of the elevated monorails whereas subways are, obviously, out of sight. A growing Los Angeles is losing its open skies. To retain as much open sky as possible there should not be thick and heavy concrete elevated monorails blocking our sightlines.

And how high would the elevated monorail line need to be to conquer the steep Sepulveda Pass grade climbing out of the valley? How good are the brakes on a monorail to make sure it slows and stops when descending that grade?

I receive text updates from Metro on train delays with their Metrorail system. I don’t like it. No rider likes delays, but we are dealing with machines and infrastructure, and both breakdown and wear out. Even on the hollowed monorail grounds of Disneyland, its amusement park ride closes for maintenance. I have been in the park when their monorail was out of service for the day, and once there was service in the morning, then it was out of service in the afternoon.

When the Metrorail trains and tracks need repair and maintenance, workers drive there on the streets, or on the rails in modified trucks. If an elevated monorail train or its concrete rail support over the 405 were to brake and need maintenance, how would workers get to the train and elevated track?

Freeway lanes would have to be closed to allow the heavy equipment, ladders, and cranes reach the elevated tracks and monorail cars. These incidents would create tremendous gridlock for the already gridlocked Westside – a waste everyone’s time, including drivers and transit riders.

What if there is an emergency on an elevated monorail and passengers need to disembark? How would that work? To keep transit riders and transit workers safe, walkways would need to be built along with concrete rails, and this would add to costs.

The Times writes that there is no guarantee that the monorail would cheaper to build. I agree. And as a standalone system, the monorail would require its own maintenance yard, and unique spare parts. With the existing subway rolling stock, cars and parts can be more quickly and easily exchanged for maintenance and repairs, probably more cheaply.

There is the issue of earthquakes and subways. In the major cities with subways which suffered earthquakes -- Mexico City, Tokyo, San Francisco, New York, Washington D.C., and Los Angeles – the subway systems suffered little to no damage and were quickly back in service, whereas there was major damage with the collapse of elevated freeways.

How well would the elevated Sepulveda Pass monorail survive major shaking when the history for elevated transit in earthquakes is disastrous? Yes, the 1995 Kobe, Japan monorail survived a major earthquake, the there is no explanation why. Was it due to luck? The Kobe subway system was intact and operational after that 1995 earthquake.

As a longtime transit rider who suffers from a lack of fast transit on the Westside, please spare me the fanboy talk of a cheaper, superior monorail. This is just talk, not reflective of real-world transit riding experience in Los Angeles. We must build the subway, as soon as possible.

(Matthew Hetz is a Los Angeles native. He is a transit rider and advocate, a composer, music instructor, and former member and president and executive director of the Culver City Symphony Orchestra. He is a CityWatch contributor.) Photo: LA Metro. Edited for CityWatch by Linda Abrams.