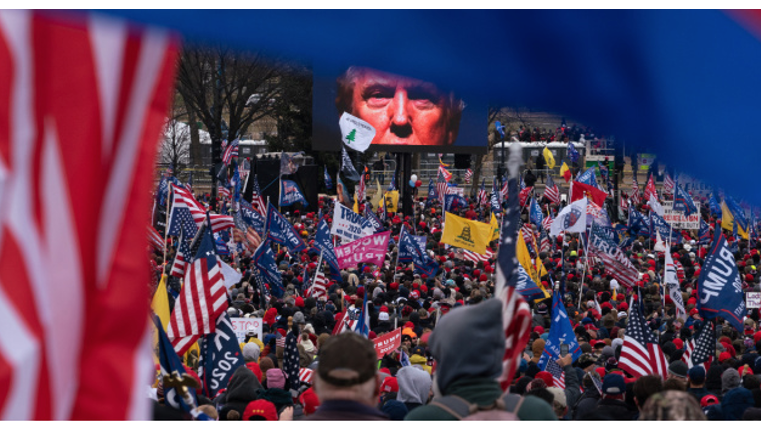 GUEST WORDS-It seems the veterans of the Great Capitol Insurrection, high and low, are not faring well.

Scores of rioters have been and continue to be arrested, many moronically incriminating themselves en route - with their "Murder the Media" t-shirts, their selfie videos proclaiming Trump needs to "fire the bat signal" and "death is the only remedy" for lawmakers, their getting booted from airplanes for yelling "Trump 2020!" and their admissions they were in "a fit of rage" on that now-murky day after unsuccessfully trying to flee to non-extradicting Switzerland.

Their slimy Fuhrer, meanwhile, is daily being proved guilty of fomenting it all. Investigations by both Bloomberg and Open Secrets have found that Trump's campaign and assorted cronies not only paid over $2.7 million to individuals and firms that organized the pre-riot rally, but that they likely worked with dark money groups and shell companies to illegaly launder their respective funds.

According to Open Secrets, the full extent of Trump campaign ties to the riot is still unknown; thanks to opaque practices around campaign finance laws, FEC disclosures only provide "a snapshot" of campaign payments that are further hidden by being routed through shell companies - at least one of which was set up by Jared Kushner - "making it difficult to know who the campaign paid and when." In other words, grifters gonna grift, which is why many are urging further investigations in order to #ProsecuteThemAll.

What's known to date: At least eight people listed on the rally permit granted by the National Park Service worked for Trump’s  campaign. They include Maggie Mulvaney, niece of Mick, whose title is director of finance operations and who's listed as the rally's “VIP Lead.”

Rally personnel also listed on the permit include “VIP Advisor,” operations associate, production manager and stage manager - the latter two roles filled by the owners of Event Strategies Inc., the largest recipient of Trump campaign funds with a payday of $1.7 million. Thus begins a tangled web of ongoing dealings with dark entities like America First Policies and  American Made Media Consultants LLC, Trump's spending clearinghouse, which routed over $759 million to as-yet-unknown recipients.

With the riot's ominous backstory still emerging, Dems on the Senate Finance Committee have begun asking the IRS to investigate the tax-exempt status of dark money groups involved in rally planning, part of a larger probe into tax-exempt groups.

That spotlight on Trump et al will only get brighter in the lead-up to a Senate impeachment trial slated for Feb. 9. It probably didn't help when Chuck Schumer, providing comic relief with an inadvertent, smirking self-own, declared Trump must be held accountable for inciting "the erection." Cue bad puns about uprisings, hard-hitting analysis, and sedition that cannot stand. This trial outta be...something.