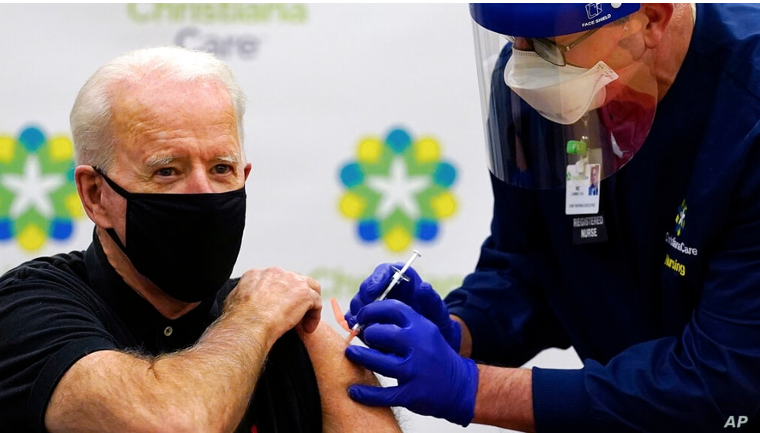 THE DOCTOR IS IN! There's a lot of politics and bloviating right now, as there should be--but the downfall of Donald J. Trump and the rise of Joe Biden rested, and still does rest, on one thing ONLY:

Will 2021 be as horrible as 2020 with respect to death, disability, and economic destruction caused by the "Russian Roulette" virus that is COVID-19?

As I stated in my last CityWatch piece--and I remind you that this virus is one of the main things patients ask me every day--the following is true:

1) The spread of COVID-19 is so widespread and rapid that each of us who go to work and don't shelter at home are virtually in a race between getting vaccinated...or getting the virus.

2) Patients and customers at businesses are either willfully lying to themselves or to their doctors/neighbors because they are tired of being locked down...and that is both human nature and what's making us lose in the race to defeat the virus.

3) COVID-19 is "Russian Roulette"...so spare me that it's no big deal, and which is just the flu. You bet that a lot of us already had the virus, and you bet that the survival rate is very high...but neither SARS nor MERS nor even the flu (which is a killer, of course!) leaves the amount of permanent lung fibrosis and related damage that this virus does.

4) The analogy of COVID-19 is NOT to the influenza virus but rather to polio--most who got that either had NO symptoms, or just some diarrhea and other gastrointestinal symptoms to which little to no attention was needed...and then others were permanently disabled neurologically or even died.

It is indeed possible that this nation would have continued its united approach a year ago had it focused on this "Russian Roulette" analogy during the summer of 2020 when things fell apart both economically, politically, and culturally in this nation.

Now to the present-day:

1) President Joe Biden will NOT unite the nation on race, the economy, immigration, or civil rights...he will either succeed or fail on combating COVID-19.

2) President Trump, even to many who voted for Biden, could have left a hero had he dispatched the military hospital ships for non-COVID patients like he did a year ago. He would have been a hero had he even dispatched the military (declare martial law, if necessary) to take over underperforming state and counties with respect to vaccine administration.

Trump did NOT--he focused on political issues, and not the health of Americans, and even to many of his most ardent supporters he burned bridges when loyalty to the health and survival of Americans should have been Priority #1.

3) Now it's Joe Biden's turn to be beloved or despised by Americans as the sickness, death and economic misery of our nation proceeds and even worsens unabated. Wall Street is doing great, but Main Street is in the dumps...and NONE of that means ANYTHING if you're sick, disabled, or even dead from the Russian Roulette virus that is COVID-19.

Former President George W. Bush was despised by many after the divisive 2000 election but saw his support rocket immensely to the stratosphere after 9/11. Trump started on the right path, could have been outrageously popular, but took a laissez faire approach and "coasted" last summer and chose a different path. Hence G.W. Bush got re-elected, and Trump did NOT.

4) President Biden will NOT be opposed by most Americans if he overrides states and counties screwing up in vaccine administration. Even if martial law has to be declared in certain localities, millions of vaccine doses need to be transferred from refrigerators and freezers to the arms of Americans at risk.

Why states don't have 24-7 administration sites throughout the nation is beyond me, or any other thinking, taxpaying, fearful American!

5) Health care providers aren't getting immunized in a timely manner, and for all the flowery speech of helping our seniors, those over 65 are at this time nowhere near having a clue as to when it will be their turn to get vaccinated. And don't even get me started for pharmacists, grocery store workers, and restaurant owners/workers.

We're in a world of hurt, and it's why Joe Biden's honeymoon period will have to be delayed, and will not exists at all if he fails, because of the COVID-19 vaccine rollout...or lack thereof.

Don't worry about those who don't want their vaccination, President Biden--just make damned sure that those who DO want it...GET IT! ASAP!

Because nothing but widespread vaccination will put this Russian Roulette virus in our rear-view mirror. And right now, there's NOTHING to make us presume this won't have another giant wave in the winter of 2021-22.

(CityWatch Columnist, Kenneth S. Alpern, M.D, is a dermatologist who has served in clinics in Los Angeles, Orange, and Riverside Counties, and is a proud husband and father to two cherished children and a wonderful wife. He was termed out of the Mar Vista Community Council (MVCC) twice after two stints as a Board member for 8-9 years and is also a Board member of the Westside Village Homeowners Association. He previously co-chaired the MVCC Outreach, Planning, and Transportation/Infrastructure Committees. He was previously co-chair of the CD11 Transportation Advisory Committee, the grassroots Friends of the Green Line (which focused on a Green Line/LAX connection), and the nonprofit Transit Coalition, and can be reached at Ken.Alpern@MarVista.org. The views expressed in this article are solely those of Dr. Alpern.).