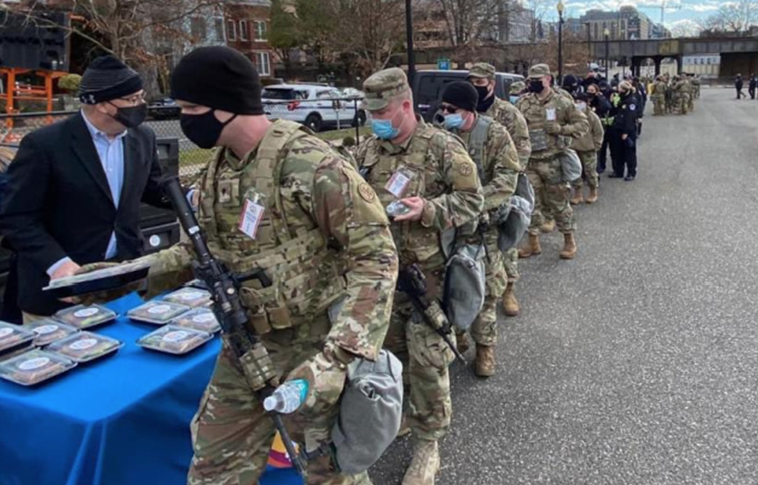 enough MAGA yahoos remain out there that almost half the country's governors called out the National Guard, issued states of emergency, canceled legislative sessions, or fenced in and boarded up their state capitols Sunday in anticipation of planned protests on behalf of more giddy, pointless, seditious violence. (Photo above: Chef Jose Andres feeds the troops. Twitter photo. Front photo: The only two attendees at Nashville protest.)

"The state Capitol has become a fortress," said Oregon Senate President Peter Courtney. "It breaks my heart." Still, perhaps discouraged by ranks thinned by FBI arrests, online shutdowns or bad press, the promised MAGA mobs failed to show, and most of the protests fizzled into the surreal spectacle of occasional clusters of hooligans vastly outnumbered by troops, cops, journalists, dog-walkers, roller-bladers and, in Des Moines, "No protesters. Just geese."

Sacramento saw two protesters and one counter-protestor; in Nashville an older couple showed up for a rally that wasn't and went home; a St. Paul rally drew about a dozen guys facing a phalanx of troops and one in Salem had five in camo urging, 'Disarm the Government!"; Madison cops arrested a guy who drove drunk up the steps of the Capitol; a much-touted, drive-by rally in Connecticut dwindled into three pro-Trump cars circling the capital after police banned them from gathering in the IKEA parking lot. At Nevada's capital, just one lone counter-protester showed up with a sign proclaiming, "Trump Lost! Be Adults! Go Home!"

Of course, the dangers of far-right violence persist. A group of about 20 Boogaloo Boys, armed with assault rifles and keen on the idea of civil war, turned up in Lansing, which has already seen its share of violence aimed at Gov. Gretchen Whitmer, but they quickly dispersed when confronted by troops.

About the same number, likewise heavily armed, appeared in Columbus; they said they were there for a long-planned gun-rights rally on behalf of "everyone's individual liberties." In D.C.,  tensions remain high enough the presence of 25,000 National Guard has turned the city into "a war zone" and the FBI is now vetting them all, "taking second, third looks at every one," amidst fears of an insider attack during the inauguration.

For now, officials say they've found no red flags, and Guardsmen are being well fed - "because of course" - by chef Jose Andres, omnipresent humanitarian hero, founder of World Central Kitchen, and "the best of us." As usual, Andres is providing not just food - in this case, to complement military rations with the help of local restaurants - but grace.

With the singular ardor of an immigrant who dearly loves his adopted country, Andres offers both reassurance to his viewers - "They're being taken care of, so be relaxed" - and a stern lesson. "Democracy should be a celebration, when you win and when you lose," he declares. "And we shouldn't be needing the National Guard to be showing up at election time. This shouldn't be happening in the United States, ever again."

(Guest columnist Abby Zimet writes for CommonDreams.org … where this piece was first posted.)