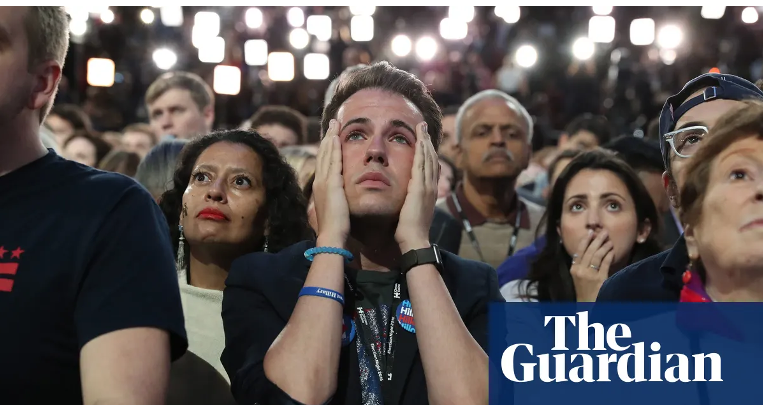 GELFAND’S WORLD--Thanks to everyone who stuck with it, starting on that awful day after the 2016 election.

It started with giant marches and with the formation of 7000 chapters of Indivisible. I suspect that it also included millions of people who maybe aren’t joiners or political activists, but who have remembered to anticipate this day. (Photo above: Hillary Clinton supporters react to election news in 2016.)

Here’s one data point, just to take one example out of many. As of the beginning of this week, Iowa voters who are registered Democrats have already turned in 252,257 ballots. What’s astonishing about that number is that it represents 65% of all the mail-in ballots that Iowa Democrats requested. Meanwhile, the Iowa Republicans have turned in 130,833 ballots, just a little more than half the number of Democratic ballots.

Another data point: As of this writing, the number of ballots cast nationally sums up to 21% of all the votes cast in the 2016 election. That’s 29 million ballots so far. That’s not too shabby. There were 82 million mail-in ballots requested, so the mail-in voters will probably end up being a majority of all voters.

One other data point: A national group has just sent out 15 million letters to sometime voters who are being reminded to vote this time. Those letters were penned, addressed, and inserted in envelopes by well over a hundred thousand volunteers.

When all these dedicated people and frustrated voters are put together, the  2020 voter turnout will likely swamp the 2016 numbers. And you know who doesn’t want to see a healthy turnout of voters.

By the way, if you want to follow the numbers yourself, just click on the 2020 General Election Early Vote Statistics.

The End of the World is Nigh

I keep wondering why those ultra-conservatives and backwoods preachers haven’t noticed that our country is being visited by the equivalent of the biblical plagues, give or take a few:

OK, so that last one is a reach, but my hometown is only 4 games away from winning the NBA and the World Series in the same year, and the professional football franchise (as long as they decide to stay in L.A. for a while) is at least competitive.

Admittedly, we’re still short of the frogs and locusts, but if you watched the late news, you would be aware that we’ve got an over-abundance of great white sharks right off shore this year. Haven’t the super-conservatives figured out that maybe somebody is trying to tell us something?

I don’t know how seriously to take all the current sturm und drang about predicted resistance by the Trump side if and when he loses reelection. There are three possible scenarios here. The first is that Trump wins. It’s unlikely, but as Nate Silver points out, it’s a little less than the odds of rolling a 1 when you roll one die. (Note: die is the singular form for dice, the little cubes that you roll when playing craps.) Using Nate’s most immediate odds it’s basically the chance of firing a live round in a game of Russian Roulette that uses an 8-shot revolver.

The next possibility is that Biden enjoys a substantial victory and the Democrats take both houses of congress. It would be very hard for the losing side to build a Constitutional fight when so much of the final confirmation and acceptance of the electoral college vote belongs to the congress. Sure, Trump’s supporters could gripe and parade and show off their long guns, but in the end, the legal transition will take place. The most likely scenario here is that Trump goes off to Florida and stays there other than to play golf. And he’ll have to pay for his own plane rides.

The final possibility is that the ballot count takes a while (days to weeks) and the Trump forces continue to whine and threaten the entire time. If we have to wait two weeks for Pennsylvania to deliver a definitive result with a near tie for the rest of the electoral votes, that is the worst case scenario.

I’ve been trying to explain a proper and workable anti-Trump response – loudly defend the integrity of your own state’s process for collecting and counting ballots and, meanwhile, get poll watchers and expert witnesses into the rooms where these things are happening. Make sure that there is at least one Democratic Party official present whenever any ballot is handled anywhere. And double check the arithmetic.

But while I have been crying into the wind, the Democratic Party leadership have been making their own plans. They don’t seem to be all that different. You can read about them in the CNN story here.

“While plans are being drawn up, there are concerns that Democrats simply won't have the messaging horsepower to counter Trump's bully pulpit -- and Twitter account -- if he claims victory on election night before states are called or claims that Democrats stole the election.

"We need to step up our messaging," said Rep. Gerry Connolly, a Virginia Democrat. "There's not an organized effort. We're going to have to really move into hyper-drive here to counter that false and insidious narrative of the President and lower expectations about you're going to know everything you need to know on November 3."

May I suggest that this is likely an overreaction. The reason is that the media always focus on the president-elect and spend a lot less time, ink, and airtime on the loser. If Biden has a credible case for eventually coming out on top, that’s worth a lot of mass media coverage. We will have a blitz of conjectures, insider stories, and just plain press conference material about who will be in the new cabinet, what the legislative plans will be, and so forth.

It depends on how sore a loser Trump would be. The ultimate sore loser story actually goes back to the 1990s and a closely run congressional election between Democrat Jane Harmon and Republican Susan Brooks. At the end of election night, Brooks was a few votes ahead of Harmon. She claimed victory and actually flew to Washington D.C. to join with her newfound colleagues. As the rest of the votes were counted, Harmon gradually took the lead and eventually was declared the official winner.

Brooks did not accept the result, claiming illegal votes (sound familiar?) and filed a lawsuit and generally complained that she was robbed. You can read about it here.

The thing is that Harmon eventually went back to Washington and basically ignored the whining from the other side. That could be Biden’s tack in this election. There will of course be a large number of Trumpistas remaining, but what they won’t realize is that they will (by taking themselves out of the group supporting the next Republican candidates) be harming future Republican chances.

When I first started this online blogging gig, I did media criticism. Over the years, newspapers and television news programs tended to stick with that phony balance routine – you know, the idea that for every position you feature with a spokesman, you have to find an equal and opposite spokesman. We used to have the two local pediatricians (out of more than a thousand) who were a little negative on vaccinating children go on the air in an insane number of times because that was balance. One improvement is that newspapers and tv shows are now willing to go the extra step and point out curtly and directly that wearing masks is recommended no matter what the crazy lady screaming her head off in Trader Joe’s had to say, and now CBS bluntly rebukes presidential lies. This is a plus. And the anti-vaccine guys have largely been ignored.

But this week I need to dust off an old gripe. It’s all those baseball announcers on the radio and TV. What’s my complaint?

I don’t mean that they have to have a way with words like Vin does. It would be asking a lot of broadcasting companies that they put real journalists in jobs that involve journalism. But the announcers for the recent National League Championship Series were kind of getting on my nerves.

The Hall of famer went into Sunday’s game with the prepared-in-advance story line that this is a 7th game, and 7th games are different in the following 3 ways which I will repeat all night long. I suspect it’s just the need to fill dead air time, but it was that old joke brought to life about the 12 step program anonanonanon (try speaking it out loud).  So we had the Hall of Famer telling us in rapid succession every mental error and subtle calculation and strategic trick that pitchers worry about. And curiously enough, with all those words, they don’t take the time to explain to the non-pitcher what a cutter is, or what a four seam pitch is. Most of us know the idea behind a curve ball and that a fast ball is different, but just exactly how do you throw a slider, and what does it do different?

By the way, the jargon used by basketball and football announcers is worse. I can figure out what the guy means by saying that a player went “coast to coast,” and somehow “taking it to the house” apparently refers to the process of running for a touchdown, but why?