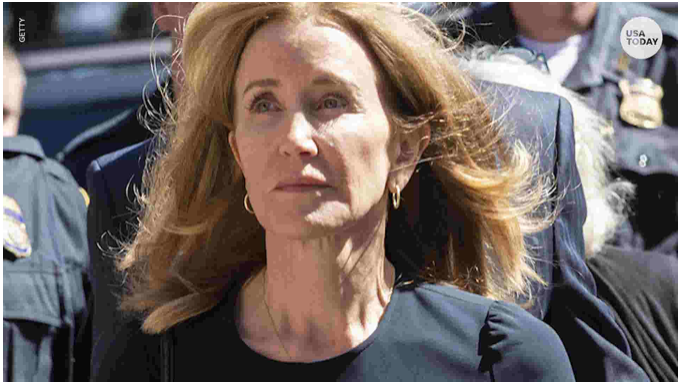 BCK FILE--Last Friday, U.S. District Judge Indira Talwani sentenced Felicity Huffman to 14 days in prison, along with 250 hours of community service and a $30,000 fine. The actress had pleaded guilty to one count of conspiracy to commit mail fraud and honest services mail fraud in May.

Huffman confessed that she had paid an admissions consultant $15,000 to arrange for a proctor to correct her older daughter’s answers on the SAT college admissions exam. She had considered doing the same for a younger daughter but changed her mind.

“I think this is the right sentence,” the judge told Huffman at sentencing. “You can move forward and rebuild your life after this. Without this sentence, I think the community around you would ask why you got away with this.”

Huffman is the first of dozens of wealthy parents netted in what has become known as the Operation Varsity Blues scandal. William “Rick” Singer attracted elite parents from entertainment, corporate America, and even a white-shoe law firm to his “college counseling” business known as The Key. (Key Worldwide Foundation and The Edge College & Career Network).

Not Your Garden Variety Counseling Service

This wasn’t your garden variety counseling or SAT tutoring service. Parents paid Singer to arrange the dirty work to boost their children’s chances for admission to selective universities, criminal acts that had included bribery, falsifying resumes and transcripts, and in Huffman’s case, cheating on college admission exams.

Huffman is one of at least 51 parents alleged to have participated in the college admissions scandal; 33 parents have been accused of paying Singer over $25 million between 2011-2018. Singer used part of this money to bribe college officials, coaches, and others, as well as for “operating expenses” involved in manipulating test results.

Singer has pleaded guilty and is cooperating with the FBI in gathering evidence against co-conspirators. He says at least 750 families benefited from his schemes. Singer faces up to 65 years in prison and a fine of $1.25 million.

Charges against parents who paid Singer to use bribery and fraud to stack the odds of college admission to 11 universities were charged with felony conspiracy to commit mail fraud and honest services mail fraud. These charges carry a maximum term of 20 years in prison, supervised release for three years, and a $250,000 fine, up to the discretion of a sentencing judge. Fifteen of the parents were also indicted for alleged felony conspiracy to commit money laundering.

Since the scandal first broke, Operation Varsity Blues has been a popular topic of conversation for parents who have been through the college admissions process with their kids. The scandal is emblematic of wealth and privilege disparity. The uber-rich, powerful, and famous seem to get away with a multitude of sins.

John Legend is one celebrity who has expressed that prison time for Huffman seems excessive for what she has done. Assistant US Attorney Ed Rosen has contrasted Huffman’s sentencing to that of Akron mother Kelly Williams-Bolar who was convicted and sentenced for falsifying her address to get her kids into better public schools. At Huffman’s sentencing, in fact, Rosen referred to Williams-Bolar’s case, calling prison “the great leveler.”

As a parent of daughters who have gone through the stressful college admissions process, I am aware that there’s no level playing field. Parents with resources can afford tutors, costly summer programs, private counselors, test prep, and much more.

Even during college, kids with enough money aren’t stressed by the prospect of college loans, the demands of balancing work with study, and not being able to afford unpaid internships. Many of us benefit from those perks. I suppose we could look at these bonuses as part of capitalism. Some people have more resources than others and that leads to certain privileges. Life isn’t fair.

In an ideal world, we would have a level playing field. I don’t know the answers. But, I do know we need a massive overhaul of the way we address privilege and lack thereof. Whether we’re looking at education or criminal justice, we have a system that treats people in such polar opposite ways.

Should we use sentencing as a message that privilege doesn’t matter? I believe that Huffman, along with the rest of these parents, deserve consequences for their actions. These parents broke the law and they should have greater consequences than a fine that won’t really impact them at the end of the day.

However, sentencing Huffman and the other parents who chose to break laws to give their kids a ladder up is far from enough to level the playing field. This is just the beginning.

(Beth Cone Kramer is a professional writer living in the Los Angeles area. She covers Resistance Watch and other major issues for CityWatch.)