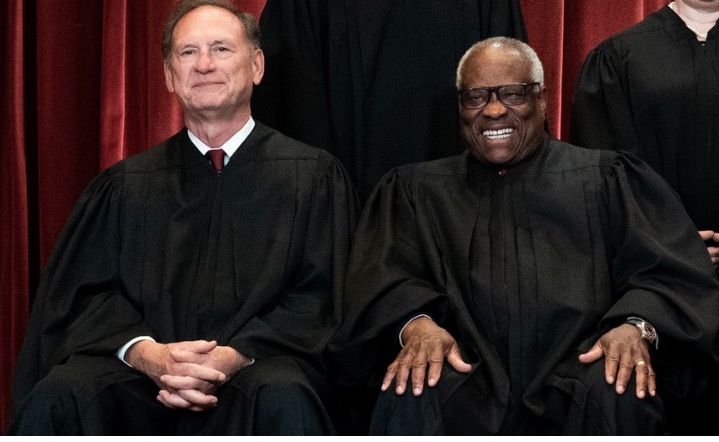 SCOTUS - The Dobbs opinion overturning Roe. v. Wade is another marker on the road to where Republicans and the U.S. Supreme Court's conservative super-majority are taking the country.

Millions of Americans cheer the journey. But a lot of them won't like the final destination.

Writing for the majority, Justice Samuel Alito purported to apply "originalism"—interpreting the Constitution and the 14th Amendment based solely on their original intent when adopted in 1788 and 1868, respectively. It's a relatively new approach.

For almost 200 years, the Supreme Court viewed the Constitution as a "living document." Whatever its framers might have thought—and often those thoughts were contradictory and changing—was of limited interpretational value in modern times. In the 1960s, originalism emerged as a reaction to the expansion of individual rights under Chief Justice Earl Warren, whom President Dwight Eisenhower—a Republican—had appointed in 1953.

With President Richard Nixon's appointment of Chief Justice William Rehnquist in 1971, originalism gained a powerful ally. Ignoring the ways that the world has changed, it has now become an excuse for judges to pretend that they're historians, searching for ancient tidbits to support their personal and political agendas.

In Dobbs, Alito began his historical discussion of whether women have a right to bodily autonomy by citing a treatise—from the Middle Ages! He quoted Henry de Bracton's 13th century work stating that if a person has "struck a pregnant woman, or has given her poison, whereby he has caused abortion, if the fetus be already formed and animated, and particularly if it be animated, he commits homicide."

Alito cited Bracton six times, but he ignored the misogynist's statements that provide true historical context, such as, "Women differ from men in many respects, for their position is inferior to that of men" and "those born of prohibited intercourse… are fit for nothing."

From there, Alito mustered cases and authorities from the 1600s and 1700s in concluding—incorrectly—that "no common-law case or authority… remotely suggests a positive right to procure an abortion at any stage of pregnancy" and, in the United States specifically, there was "an unbroken tradition of prohibiting abortion on pain of criminal punishment… from the earliest days of the common law until 1973." (Emphasis in original)

But there was no such "unbroken tradition. As the three dissenters in Dobbs observed, even on his own originalist terms, Alito was "embarrassingly" wrong, ignoring crucial differences based on the stage of a woman's pregnancy. Ohio State University Prof. Treva Lindsey noted, "From the nation's founding through the early 1800s, pre-quickening abortions – that is, abortions before a pregnant person feels fetal movement—were fairly common and even advertised."

Even Bracton—in the passage Alito excerpted—confirmed the pre-quickening distinction ("…if the fetus be already formed and animated, and particularly if it be animated..."). Other historians have blasted Alito's rendition as "egregiously wrong" – ironically a phrase that Alito used repeatedly to describe Roe.

Today, 93 percent of abortions occur during the first trimester of pregnancy—that is, they're "pre-quickening."

"Originalism" and the Descent into Darkness

Beyond Alito's bad history, he laid bare another of originalism's flaws when it comes to protecting individual rights and liberties. As the dissenters in Dobbs emphasized, never in its history has the U.S. Supreme Court rescinded an individual right in its entirety and conferred it on the states—until now.

Falsely characterizing the actual history of a uniquely woman's right, Alito denied it federal protection. That is where his invocation of the Middle Ages was so revealing.

At any given moment in history, not all individuals in a society have enjoyed the same rights. Searching the Dark Ages for a woman's personal right to liberty, property, or bodily autonomy is futile. Using language from cases, statutes, and related treatises in 1250, 1634, 1789, and 1868 to find the rights of those who were excluded from the process of writing the rules is not merely a fool's errand. It's an absurd task.

But Alito used the absence of a right in ancient times to let the states decide whether it exists at all today. Similar invocations of "states' rights" have accompanied the darkest chapters of American history. It's the banner under which white men who feared losing power have retained it by suppressing those who threatened them.

More than 150 years ago, an appeal to "states' rights" provided rhetorical cover for the South to ignore federal laws interfering with slavery.

Today, it's the mantra that Republicans use to impair the right to vote—targeting those citizens who are least likely to vote for Republicans.

Personal liberty is antithetical to tyranny. The U.S. Supreme Court's conservative super-majority has joined the Republican party's push in an anti-democratic direction. Its rulings now go hand-in-hand with the GOP's continuing embrace of authoritarianism, autocracy, and attacks on participatory democracy.

Justice Thomas's concurring opinion in Dobbs took an even more extreme position. As he has done repeatedly, Thomas urged the Court to take a close look at the panoply of "substantive due process" rights that have become embedded into 14th Amendment jurisprudence over the past 150 years. He specifically listed cases that established the right to privacy (including the right to obtain contraceptives), gay marriage, and consensual sexual behavior. Conspicuously absent from his list was interracial marriage, but featly to his own stated interpretational principles required him to include it too, even though he is in one.

Americans take all of those rights for granted, but make no mistake, they are in Thomas's sights. When the opportunity arises, he and his fellow conservative originalists will conclude that they cannot find those rights in the Constitution or its amendments. And when they do, those rights will no longer enjoy federal protection.

Thomas has a special personal mission in all of this. A year after his bruising confirmation battle, newly-appointed Justice Thomas told two of his law clerks in 1992 that he intended to serve until 2034, which would give him a 43-year term.

He may have gotten the idea from his wife, Ginni, who now finds herself at the center of controversy relating to her involvement in the January 6 insurrection. In a 1991 interview with People magazine, she said, "Clarence will give everyone a fair day in court. But I feel he doesn't owe any of the groups who opposed him anything."

The Power of the People

Dobbs continues the nation's descent into a period that future historians might well call America's Dark Ages. Stopping it requires those who have been sitting on the sidelines to realize that saving democracy is more important—and more enduring—than almost any of their current concerns. Inflation, crime, and gasoline costing more than $6.00 a gallon are real problems. But Republican autocracy won't solve any of them, and it will create many more.

If democracy dies, it will take a long and mighty struggle to get it back. In the interim, the personal damage to millions of Americans will be irreparable.

(Steven J. Harper is an attorney, adjunct professor at Northwestern University Law School, and author of several books, including Crossing Hoffa — A Teamster’s Story and The Lawyer Bubble — A Profession in Crisis. He has been a regular columnist for Moyers on Democracy, Dan Rather’s News & Guts, and The American Lawyer. This article was featured in Common Dreams.)