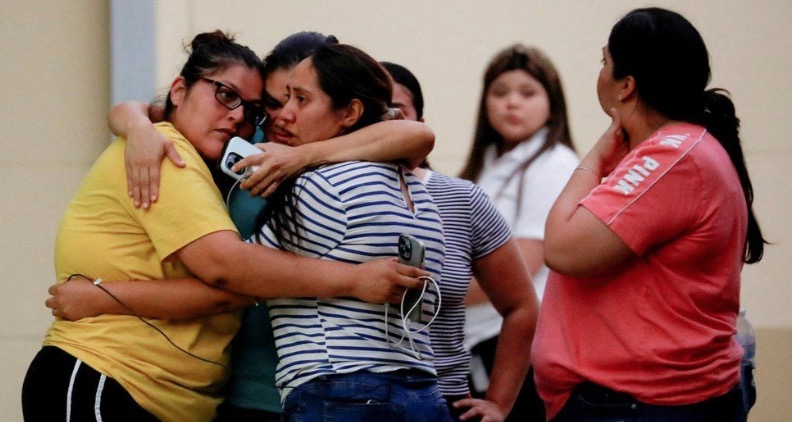 GUEST COMMENTARY - I am at a loss for words to describe my utter outrage, my excruciating pain, and my revulsion at yet another massacre in what has become an unending cycle of carnage wrought by guns.

The perpetrators are not only the murderers themselves but the Republican members of Congress who enable them to commit such heinous crimes and thus become complicit in this unfathomable American tragedy.

Yet another elementary school shooting massacre has left 19 children and two teachers dead – this time in Uvalde, Texas. The gunman was an 18-year-old who is also dead. The victims in this case were mostly 8, 9, and 10-year-olds. The bloodletting that this country is experiencing daily due to gun violence is inflicting such suffering that it cannot be measured or grasped. Suffering that leaves every parent choked in anguish that cannot be assuaged, that cannot be compensated for, explained, or given some greater meaning. This is absolute, unfathomable loss. These parents who have lost children to inexplicable, murderous rage have been plunged into a nightmare from which they will never wake. This is a horror which defies any and all explanation, a horror which any decent society would prevent by any means necessary.

Just to grasp how epidemic mass shootings have become in this country, consider the fact that since the May 14 massacre in Buffalo NY that left ten people dead, sixteen mass shootings have occurred. Five mass shootings occurred the very next day on Sunday, May 15, claiming four lives and injuring twenty-three. How on earth can we as a country pretend that this is in any way normal, acceptable, or anything less than an indictment of our society which has become so desensitized to gun violence?

Every American should be standing up and crying out for an end to this awful and shameful epidemic which is permitted to continue because we apparently regard the right to have easy access to lethal firearms as of greater merit and legitimacy than the right to live free from violence, mayhem, and senseless killing.

President Biden said in the aftermath of yesterday’s shooting, “I am sick and tired of it. We have to act.” The New York Times reports today that Texas has seen eight mass shootings in the last 13 years – but it is important to note that the Times is defining a mass shooting as an incident in which a lone shooter has killed at least four people. That is not how it is defined by the Gun Violence Archive, which defines a mass shooting as an incident in which “a minimum of four victims [are] shot, either injured or killed, not including any shooter who may also have been killed or injured in the incident.”

Under that definition there have been 179 mass shootings in Texas, since January 1, 2017. We have had literally decades to say enough is enough, now we must act. Yet no action or meaningful legislation is forthcoming – no action will be taken to strengthen background checks for gun buyers, no action will be taken to ban the sale of assault rifles which were used in Uvalde and in over 165 mass shootings in this country since the Sandy Hook Elementary massacre on December 14, 2012.

The heartbroken parents who have had to endure unspeakable pain are told by political leaders that they have the prayers of the country; that they and the children they have lost will be remembered in the prayers of concerned Americans all across the nation. Prayers? Parents who lost a child do not need anybody’s prayers, good wishes, or social media self-displays of condolence and commiseration. They want their child to come back from school alive, to be held again, kissed again, and loved again. Offering prayers sounds disgustingly irrelevant to the nature of the crisis at hand.

What the parents and every American that has lost a loved one to senseless shooting needs now is serious action—actual legislation that will curb the spate of gun violence which is consuming this country from within. The whole world is watching as America continues to destroy itself, its social bonds of trust, its duty to its children, through its obsession with protecting gun rights at all costs.

We have fetishized the Second Amendment; we have turned it into an idol, an altar on which to sacrifice our children – as if we exist to serve and protect this single right. Do we truly need to protect at all costs whatever the right for people to have unimpeded access to firearms that belong nowhere but on the battlefield?

Is this what any serious person could think the Second Amendment is about? Is anyone supposed to believe that the Founding Fathers were so concerned that an 18-year-old should be able to purchase an assault rifle for his birthday that they would safeguard that right above the right of an 8-year-old not to be gunned down in the middle of school?

Senator Ted Cruz is scheduled to speak at the NRA’s annual meeting on Friday. What is he going to say, given that he claimed to be “sickened” by what occurred in Uvalde? Is he going to rise to the moment and tell the NRA that the country can no longer bear to watch this horror unfolding day by day?

Is he going to say that the right to guns can be protected while enacting basic common-sense laws which will prevent this needless, and unimaginably cruel killing of society’s most innocent and vulnerable members? Is he going to say that enough is enough, that we must all, Democrats and Republicans alike, wake up and together pass legislation to end this American tragedy?

Or will he simply repeat the same platitudes and refuse to lay any responsibility at the door of an organization whose overriding concern has been to protect America’s right to deadly firearms for profit? For politicians to seek the support of a corrupted organization to be elected, and close their eyes and numb their hearts to the bloodletting of thousands of innocent men, women, and children – if this is not an American tragedy, then what is?

The American tragedy is not limited to the carnage that is daily sweeping the nation. Our real tragedy is when the lives of our citizens become fair play and those who refuse to act are still in power.

(Dr. Alon Ben-Meir is a retired professor of international relations at the Center for Global Affairs at NYU. He taught courses on international negotiation and Middle Eastern studies for over 20 years.)

Who's Going to Pay for LA's Multibillion Dollar Capital Program?

How Taxes Are Decided In California

We Have A Smoking Gun – Indict Trump

Who's Going to Pay for LA's Multibillion Dollar Capital Program?

“I Cannot Think of Many Things More Frightening”

Cut Him Off, Next Speaker

So Big the Land, So Small the LA Politicians

LA Needs to Plan, Plant and Care for a Proper Urban Forest – While It Still Can.