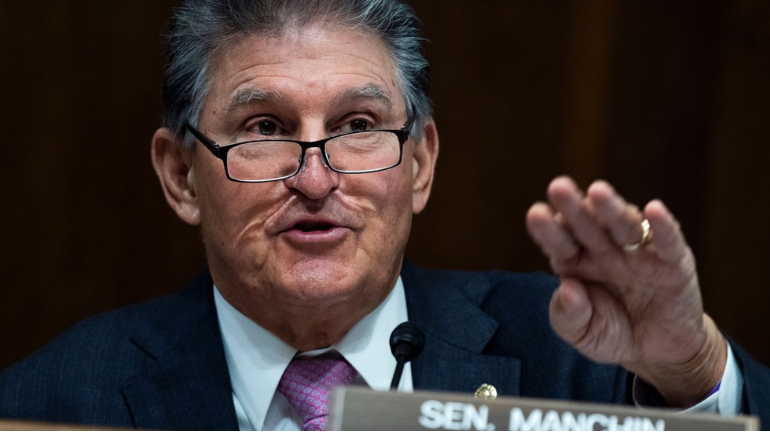 DC WATCH - U.S. Sen. Joe Manchin came under fire Saturday after The Washington Post reported that the West Virginia Democrat "does not currently support" passing even his own recent $1.8 trillion counteroffer to President Joe Biden's Build Back Better agenda.

"Sen. Manchin is operating in bad faith," tweeted Nida Allam, a progressive congressional candidate in North Carolina. "We need to be electing Democrats who are accountable to the American people and working families—not Dems who are reneging on deals which would support millions."

Journalist Judd Legum, who runs the newsletter Popular Information, said that "if you were a fossil fuel lobbyist and had to construct an ideal strategy not only to kill BBB but to gum up the works for as long as possible it would look a lot like what Manchin has been doing."

In a secretly recorded conversation published last summer by Unearthed, Greenpeace U.K.'s investigative journalism arm, a lobbyist for fossil fuel giant ExxonMobil said of Manchin, "I talk to his office every week."

Since then, House Democrats have passed a watered-down version of the Build Back Better package. However, progressives within and beyond Congress have grown increasingly alarmed about the bill's future, especially after the lower chamber caved to a few members of their own party and decoupled it from bipartisan infrastructure legislation.

Rep. Ilhan Omar (D-Minn.), one of the six progressives to oppose the decoupling, warned at the time that "passing the infrastructure bill without passing the Build Back Better Act first risks leaving behind child care, paid leave, healthcare, climate action, housing, education, and a roadmap to citizenship."

"The Squad was right to not trust Joe Manchin."

Manchin—who, along with Sen. Kyrsten Sinema (D-Ariz.), has long held up a vote on the Build Back Better Act in the upper chamber—confirmed Tuesday that he is not currently talking with the White House about the package, telling reporters that "there is no negotiation going on at this time."

Citing three unnamed sources, the Post's Jeff Stein revealed that "privately, he has also made clear that he is not interested in approving legislation resembling Biden's Build Back Better package and that Democrats should fundamentally rethink their approach."

"Senior Democrats say they do not believe Manchin would support his offer even if the White House tried adopting it in full—at least not at the moment—following the fallout in mid-December," Stein continued, referencing a pair of White House statements that called out the senator by name and a Fox News appearance in which Manchin blasted the bill.

In response to Stein's revelation that Manchin's offer "may no longer be on the table," Jake Sherman of Punchbowl News tweeted that "it's definitely not."

"As of now, I have no reporting that Manchin will get back up to [$1.8 trillion]. I talk to him nearly every day and he continues to be exceedingly skeptical of anything," Sherman said. "Now, could something happen? Sure. Could it happen at [$1.8 trillion]? Maybe. Is that likely today? It doesn't seem so."

Along with cutting the expanded child tax credit, "Manchin's offer included no funding for housing and no funding for racial equity initiatives," according to the Post. His proposal also retained tax increases opposed by Sinema, and though it featured "substantial new climate funds, the underlying policy details of his proposed climate provisions remain unclear and could have proved difficult for the White House to ultimately accept."

Getting the Build Back Better Act through the Senate requires support from every single member of the Democratic caucus. Though they can use the budget reconciliation process for that package, other bills are being blocked by the legislative filibuster—which Democrats could abolish with majority support, but Manchin and Sinema oppose doing so.

With the Build Back Better agenda stalled, Senate Democrats have shifted their focus to voting rights legislation. While Senate Majority Leader Chuck Schumer (D-N.Y.) recently vowed to change the chamber's rules to advance such bills by January 17, progressives argue picking between the sweeping package and protecting U.S. democracy is a "false choice."

Progressive campaigners plan to keep pushing for Congress to get the Build Back Better Act to Biden's desk, Alex Lawson, executive director of Social Security Works, told the Post.

"The policies we're fighting for—like letting Medicare negotiate prices—are incredibly popular in West Virginia, and Manchin is clearly not listening to people in his state," he said. "Biden has to bring the full weight of the presidency to bear on Joe Manchin to get his vote to get Build Back Better across the finish line."

"I know the grassroots are not in any way giving up on Joe Manchin," Lawson added, "and we'll make it harder and harder for him to not listen to what the people in West Virginia are demanding he do."

Our Revolution agreed that the president "must use his power to deliver his full agenda," declaring that "it's the bare minimum to address the crises we face and begin to restore the trust of voters."

(Jessica Corbett is a staff writer for Common Dreams where this was first published.)

A Trump-Nominated Judge Blocked a Wage Hike From the CA Ballot, But the Fight Isn't Over

Pit Bull Attacks are Not ‘Accidents’

Yimbyism: There’s a Whole Lot of Shilling Going On

50 City Report: California’s Fixer-Upper Markets Are the Most Expensive

The Valley: Is It Safe?