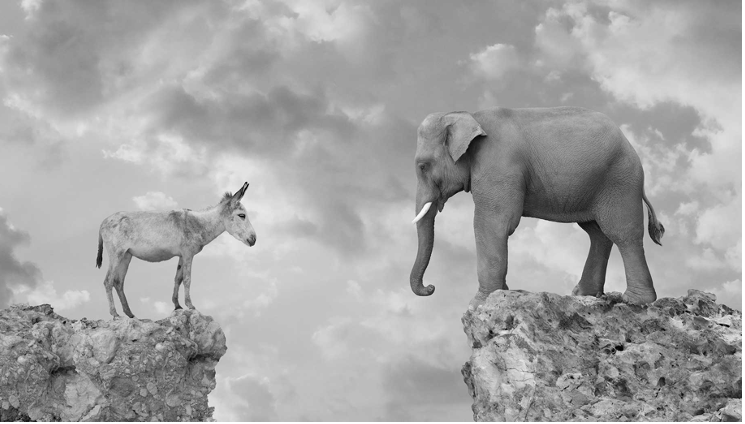 THE VIEW FROM HERE - As written previously, America believes that it has two main political parties when in reality it has four;

After World War II, America was a centrist country where many GOP and DEM had a lot in common.  The American Political Science Association (APSA) disliked the facts that America’s various political views were represented in both parties so that the parties often cooperated with each other. In 1950, APSA presented “Toward a More Responsible Two-Party System, which was an atrocious principle for governing – mortal strife and disagreement between two parties which had no common ground.

The APSA reduced the role of American voters to choosing which extreme should rule.  Centrist governance was the evil as centerism lead politicians with varying ideas to cooperate with others.  As purists, the extreme fraction in each party should control party policy so that Americans could have a clear choice, undiluted by respecting other people’s opinions.

Of course, one party could not impose its views on the entire nation unless it captured a majority of The House, The Senate and the Presidency, at which point it could ignore the rest of America.  Oops, we almost forgot. It would be necessary to also take over the Supreme Court so that it would not find the extreme policies unconstitutional.

A moment’s reflection should have killed this lunacy. What loony bird thought that “It’s My Way or the Highway” was a wise motto for governance?   When governance is based on ideological purity and party loyalty, both political parties will be dominated by power mongers.

The very idea that the political parties should have distinctly separate ideas is absurd.  That is a formula for eternal division. Why is it politically wrong for both parties to believe in personal freedom and in caring for the sick and elderly?  Why it is wrong for both political parties to believe that the police should not adopt Detective Mark Fuhrman’s motto, “All good cops lie, cheat and set people up.”?

Good Governance Comes from the Center

Otherwise, the nation is being ruled by force and not by consent.  When one party feels that it is losing control, its purists see evil rising up.  Because extremists are true believers, nothing transcends their need to control.  As night follows day, when an extreme element feels control slipping away, it must seize the government by force.  The January 6th storming of the Capitol was a When and not an If event.  The extreme element knows that losing an election means that it well be totally closed out of power.  When a nation has foolishly listened to the APSA and divided itself into to warring factions, peaceful transfer of power is a form of treason.

35% + 35% equals 85% for a simple reason.  When the governance is from the center, the  true believers who live near the border of Centerland will shed their fanatical mantle and join the crowd of Centrists.  This is a good thing.  Nothing diminishes the ranks of the extremes than their members abandoning them.

Where is America’s Center?

While Western Civilization has suffered from the insanity of dichotomous thinking for thousands of years  June 21, 2018, CityWatch, The Dangers of Dichotomy: The Saved vs. The Damned,  America was founded on a rejection of group thinking where one group had to be top and the other group had to be down.  Instead, governance rests on the consent of the governed that their individual inalienable rights were protected.

“All men are created equal, that they are endowed by their Creator with certain unalienable rights, that among these are life, liberty and the pursuit of happiness. That to secure these rights, governments are instituted among men, deriving their just powers from the consent of the governed.” Declaration 1776

The first five words are an absolute rejection of any notion of Group Rights be it Identity Politics or White Supremacy.  Since each person has rights equal to each other person, the group to which one may identify is irrelevant.  The Founding Fathers were aware of the evils of basing rights on the group to which a person belonged since Great Britain had a class system and the world was slowly abolishing slavery.  To re-enforce the inalienable rights of each person, Jefferson replaced “property” as one of the three enumerated rights with “Pursuit of Happiness.”  The Declaration’s formula was Life plus Liberty = Pursuit of Happiness (a good life).  That formula holds true today.

Obstacles to A Centrist Government

Presently, President Biden’s pandering to Wokerism has caused him to abandon the Center, which got him elected.  Not only did he not take action against CDC Rochelle Walensky’s Woker May 2021 attack on the GOP’s (absurd) stance on Covid, but he joined with her, thereby trashing his own Mask Up Until we Reach Herd Immunity on July 4th approach.  Here’s a free tip to Biden: being a subservient weenie is not politically wise.

During the 2020 Presidential campaign, Biden compared Kyle Rittenhouse to White Supremacists.  Although Biden used the words, “as we saw in Kenosha,” the world understood he was referring to Kyle Rittenhouse,. Closer to the election, Biden said that the election was not about Trump’s family or about his family but about “Your Family.”  That centerist promise got him elected.

Biden’s decision is simple: adhere to his centrist promise or side with the extreme Wokers.  Will Biden join with Thomas Jefferson, the signers of The Declaration of Independence, Abraham Lincoln, Martin Luther King, Black Lives Matter, attorney Leo Terrell and now Kyle Rittenhouse in order to govern from the Center?

More importantly than admitting his prior errors, Biden needs to promote a social agenda which roots out the abusively predatory nature of our institutions.  Dichotomous thinking results in the US vs Them mentality where the humanity of Them is erased.  The harm comes not from racism, but from predation.  If our institutions were not predatory, no institution would maltreat anyone.  As Kyle Rittenhouse’s case shows, when the prosecutor is a predator, your skin color will not save you.  Rittenhouse was acquitted because Judge Bruce Schroeder’s courtroom brought to life the values in the Declaration of Independence.

Will Biden cater to the Woker extreme or will Biden join the 85+% who are sick and tired of both extremes?