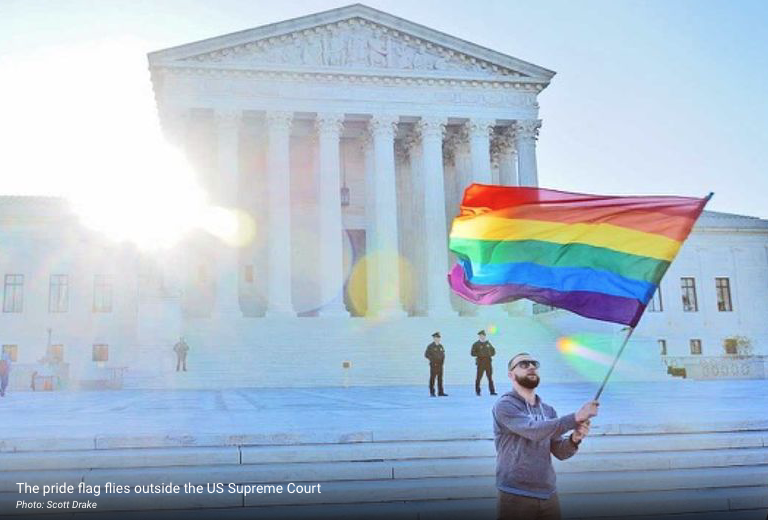 RIGHTS RULING-The Supreme Court today decided unanimously that religion supersedes the law, at least when it comes to LGBTQ rights.

In the case of Fulton v. City of Philadelphia, the justices voted nine to zero to allow a Catholic adoption agency, Catholic Social Services (CSS), to discriminate against LGBTQ people. The adoption agency sued after the city refused to refer cases to the agency due to its refusal to consider LGBTQ foster parents. The city argued that the agency’s willful violation of local nondiscrimination law meant the agency wasn’t qualified to get city business.

“Under the circumstances here, the City does not have a compelling interest in refusing to contract with CSS. CSS seeks only an accommodation that will allow it to continue serving the children of Philadelphia in a manner consistent with its religious beliefs; it does not seek to impose those beliefs on anyone else.”

In essence, today’s decision creates a carve out for existing protections for LGBTQ people. Combined with the Masterpiece Cakeshop decision of 2018, which sided with a baker who refused to bake a cake for a same-sex wedding, the conservative justices have made it clear that the rights of LGBTQ people are subject to exemptions – an extraordinary legal doctrine in the eyes of many legal experts.

“The constitutional right to religious freedom protects the sanctity of personal belief,” Katy Joseph, director of policy & advocacy for Interfaith Alliance, said. “However, that freedom ends when the exercise of one’s faith would harm the rights or well-being of another. This decision vastly distorts our first freedom by allowing faith-based providers to needlessly restrict the pool of prospective foster and adoptive parents, forcing vulnerable children to suffer the trauma of state care longer than necessary.”

“Religious freedom and nondiscrimination protections are complementary values, rooted in the fundamental principle that every person should be treated equally under the law. Taxpayer dollars should never pay for programs that exclude or discriminate against participants, especially when doing so would only exacerbate an urgent foster care crisis. I’m deeply disappointed that the Court refused to recognize that principle in this case.”

The decision was hardly a surprise. For one thing, the Court is packed with a particular kind of Catholic. Six of the justices are Catholic – John Roberts, Amy Coney Barrett, Brett Kavanaugh, Samuel Alito, Clarence Thomas, and Sonic Sotomayor. The first five are conservative Catholics; only Sotomayor represents the views of the majority of Catholics, who tend to be Democrats.

The oral arguments in the case last November also hinted strongly at the final outcome.The conservative justices were clearly sympathetic to the adoption agency.

“If we are honest about what is really going on here, it’s not about ensuring that same-sex couples in Philadelphia have the opportunity to be foster parents,” said Alito said at the time. “It’s the fact the city can’t stand the message that Catholic Social Services and the Archdiocese are sending by continuing to adhere to the old-fashioned view about marriage.”

The only question was whether the justices would go for a sweeping ruling or opt for a slower erosion of LGBTQ protections. In this case, they chose a narrow approach that focused on other exemptions the city of Philadelphia was willing to grant, but still elevated religious beliefs over civil rights protections.

“Government fails to act neutrally when it proceeds in a manner intolerant of religious beliefs or restricts practices because of their religious nature,” the court ruled.

The impact is roughly the same, however. The Court has now affirmed that people and organizations do not need to follow anti-discrimination laws if they cite a religious belief. While the Court’s decision was limited to a foster care agency in Philadelphia, the conservative justices have now opened the door to a series of legal challenges that will reshape how much protection LGBTQ Americans can expect under the law. The short answer is, not so much.