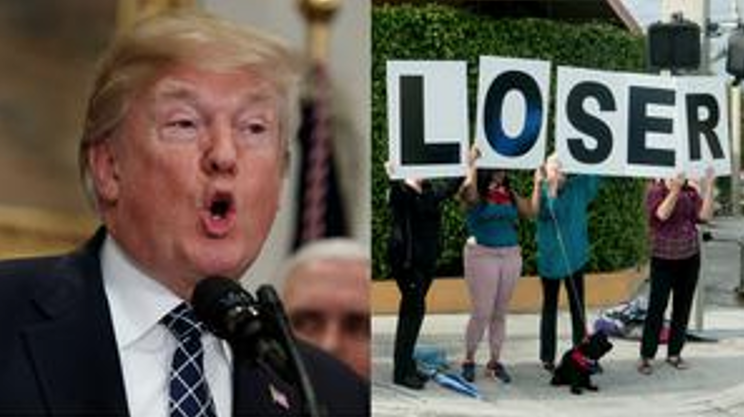 But when viewed through the lens of philosophy and psychology (which happens to be my particular academic training), his actions are not all that confusing. Irrational and stupid, yes. But not confusing. In other words, when we look at his mistakes leading up to the election, it becomes clear that the laws of human behavior all but determined that he would engage in self-sabotage. These five laws are well known to anyone who has studied personality traits in-depth or have observed how easy it is for human beings to become their own worst enemy. That is what happened to Mr. Trump by the time Americans finally went to the polls on November 3rd.

Number one. Trump succumbed to a series of Self-Fulfilling Prophecies. A self-fulfilling prophecy is when you have such a strong-felt belief that something will happen that you can influence making it happen. In Georgia and other battleground states, for example, Trump told his supporters not to use mail-in ballots. For months, he could not stop predicting massive fraud and voter suppression, and guess what, he wound up suppressing his base. Georgia Secretary of State Raffensperger, a Republican, told Atlanta ABC affiliate WSB that the president hurt his cause by discouraging mail-in voting, which he portrayed as a scam. Raffensperger told the station that 24,000 Republican voters who voted absentee in the primary did not vote in the general election. “Those 24,000 people did not vote in the fall,” Raffensperger said. “They did not vote absentee because they were told by the president, ‘Don’t vote absentee. It’s not secure.’ But then they did not come out and vote in person.”

The second law of human behavior that proved to be an obstacle to Trump is known as the Halo Effect, which suggests we use first impressions to make a total judgment about people and events. There are many examples of the Halo Effect corrupting his ability to discern friends from enemies. But the most obvious example is how he based his assessment of foreign rulers on first impressions and gut feelings. How many conservatives and moderate Republicans could not stomach the way he threw our allies under the bus and praised rogue actors such as Kim Jong Un and Vladimir Putin?

For instance, after his first meeting with the North Korean dictator-a man who supposedly fed his relatives to wild dogs- Trump said that he and Kim “understand each other,” and “sometimes that can lead to very good things.” About Erdogan, he once said, "He's tough, but I get along with him. And maybe that's a bad thing, but I think it's a really good thing." And about Putin, Trump never tired of lavishing praise. "The man (Putin) has very strong control over a country," he said. "Now, it's a very different system and I don't happen to like the system, but certainly in that system, he's been a leader. Far more than our president has been a leader."

It is a low bar indeed to refrain from congratulating and embracing thugs and mass murderers. Yet Mr. Trump could not get over that bar. No democrat told him to speak that way. It was no "Fake News" report that captured these statements. Trump said them on the air in front of millions of viewers. To this day, he has never really had a bad thing to say about these anti-democratic rulers. Who knows for sure how many swing voters he lost as a result, but it was his poor judgment that forced them away.

Trump also succumbed to The Ignorance Law. The Ignorance Law posits that when people do not know the facts (about another person, situation, event), they assume the worst and act as if it is true. The killing of George Floyd and the moral outrage it unleashed in our nation is a prime example of this law taking effect in the mind of a profoundly prejudicial man. Rather than denouncing white supremacy, police brutality, and structural racism, Mr. Trump double-downed on his law and order rhetoric. He tried to paint a vision of America that looked more like 1960 than 2020, labeled Antifa a terrorist organization, sanctioned the deployment of chemical weapons to disperse citizens using their first amendment rights, and threw gasoline on the fire whenever he could. In a time when America was in desperate need of a unifying message and messenger, Trump attempted to spark a racial war. It was a terrible miscalculation of the national mood and one that cost him dearly on election day, especially with moderates, young voters, persons of color, and suburban women.

Related to the Law of Ignorance is the influence of The Assumption Theory, which suggests that whenever we encounter a situation (people, event, idea), we assume we know what situation we are in and respond with a pre-programmed behavior already established to manage it. His total failure to understand the suburbs cost him dearly in states such as Wisconsin, Nevada, Georgia, Arizona, Michigan, and Pennsylvania. Contrary to his characterizations, suburbs no longer look like the ones he remembers. Whites comprised less than ten percent of the growth of the suburban population in the 100 largest metros between the years 2000 and 2010.

What is more, a recent Monmouth poll showed that, overall, about '3 in 4 Americans believe that having more racially integrated neighborhoods in their local communities is either very (41%) or somewhat (33%) important.' His assumption that everyone who lives in a suburb is doing so because they want to live apart from people of color is a gross distortion of reality, one that was ultimately self-defeating.

And that brings us to the fourth law of human behavior simply called Mindset. A mindset can get in the way of us seeing new options or ways of handling new situations. Whenever we approach a new problem with the same skills, expectations, and past experiences to guide us, our critical thinking diminishes and solutions become less clear. In the case of the COVID pandemic, his inability to think differently about problems ended up costing him the election and contributed to the death of thousands. All he had to do was assertively endorse masks and social distancing, utilize the full potential of the Defense Authorization Act, and galvanize the American people around a shared goal. But he could not do it. His mindset got in the way.

Because of the way he views the world, and American politics, in particular, it was impossible for him to think outside of the us vs. them paradigm. And because he is a devout follower of positive thinking as taught by the late Norman Vincent Peale, Trump could not bring himself to listen to anyone who had a dire message about the pandemic. He truly believed that he could make it go away with happy thoughts. Moreover, Trump could not bring himself to order a national mask mandate because he was unwilling to wear one. Why? Because of his vanity.

He said more than once that wearing masks is not presidential, and it makes him uncomfortable. That is what is meant by a self-destructive mindset. No one in his inner circle could convince him that telling people to wear masks would save lives and that many of those lives would be people who supported him. As a result, it was not COVID that ruined his reelection prospects. It was his dismal response to the crisis that ensured he would leave office a loser.

The bottom line is that Mr. Trump stole the election from himself.  No widespread fraud. No massive conspiracy. No one else to blame but himself.

(George Cassidy Payne is a social worker, adjunct instructor of philosophy and a CityWatch contributor. He lives and works in Rochester, NY.)