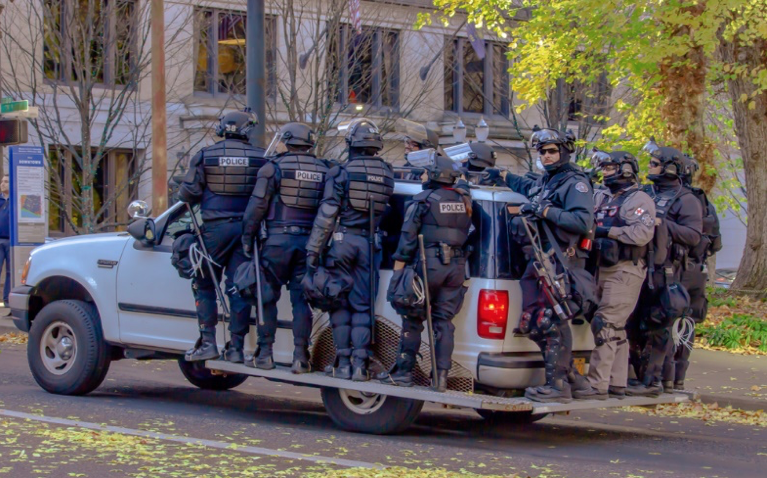 PROTESTORS VS THE FEDS-The smell of tear gas is hard to describe, but it’s horrifying.

It pinched my nose from the inside, burning deep in my nasal cavity. My throat slammed shut as my body tried to block out the fumes. My eyes burned, oozed tears, and clamped closed.

“I can’t see,” my fiancé screamed in panic. “I can’t breathe,” I yelled back. Men with weapons and armor charged forward, protected by qualified immunity and licensed to kill us on a whim.

It was my birthday, July 21, and we were participating in a nonviolent Black Lives Matter protest in Portland, Oregon. Just as the nation had begun to grapple with what should be done about police violence, President Donald Trump unleashed federal agents on the place I call home.

The agents, summoned from special Customs and Border Protection units, the U.S. Marshall Service, and Immigration and Customs Enforcement, have been snatching protesters off the streets and throwing them into unmarked vehicles without any charges.

And when they’re not tear gassing our moms, they’re cracking our skulls with so-called “less-lethal” munitions.

Federal overreach is definitely part of this story — rest assured, I want those camouflaged troops out of Portland and every other city. But the truth is, local Portland police were brutalizing and tear gassing people long before the first federal boot hit the pavement.

It’s been the same story across the country, as police at all levels have responded to protests against police brutality with alarming violence. Now, more cities are bracing themselves for an influx of federal agents eager to coordinate with local police.

This epidemic of violence is why activists have been chanting to “defund” and “demilitarize” the police. What might that mean?

For starters, the Poor People’s Campaign and other movements have put forth a demand for city governments and state legislatures to ban participation in the infamous 1033 program, which allows the Department of Defense to give excess military-grade equipment to local authorities for free.

If you give police high-caliber guns, armored vehicles, flash bang grenades, bullet-proof vests, and other equipment designed for warfare, you shouldn’t be surprised when they treat those they are supposed to protect like enemy combatants, and recreate warzones from abroad right here on American soil.

If it wasn’t apparent before, there is no denying it now: Weapons of war should not be available to local police departments.

Ending the 1033 program isn’t a catchall for addressing police brutality and excessive use of force. Many other communities are pushing broader funding cuts to police departments, reinvesting in human needs, and in some cases questioning the need for modern policing altogether.

Nevertheless, ending 1033 would be a colossal step in the right direction, and would indisputably save lives. All unwarranted equipment provided to police departments through the 1033 program should be returned to the Department of Defense, and the program must come to an end.

(Robert P. Alvarez is a media relations associate at the Institute for Policy Studies. He lives in Portland. This op-ed was distributed by OtherWords.org.)  Prepped for CityWatch by Linda Abrams.