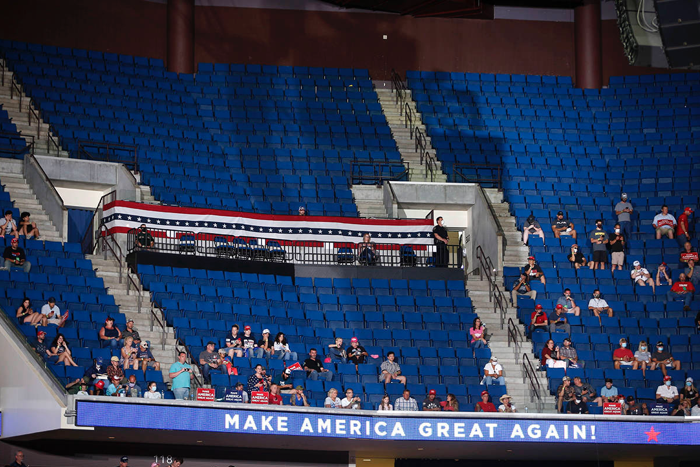 GUEST WORDS—Imagine if Adolf Hitler had staged one of his infamous 1930s fascist Nuremberg hate-fests … and the stands were less than full, his speech fell flat, his flawless phalanxes dissolved into chaos, the fighting flags failed to unfurl.

That’s what just happened to Trump in Tulsa. The implications are Earth-shattering.

When Hitler staged his ritual witch burnings, the masses were hypnotized. The synchronized film crews, the adoring media, the groveling sycophants, the murderous hate-the-Jew mobs … all were perfectly in place.

In apocalyptic unison, the Silent Majority (his phrase) panted for Der Führer to Make Germany Great Again (also his phrase). They goose-stepped in precision, all decked out in their fascist finest … the jackboots, the armbands, the billowing banners, the iron formations, the buzzcut hairdos … willing executioners flocking to Stalingrad and Auschwitz.

There were no empty seats. Every inch of every stadium was packed to the gills.

Take a look at Triumph of the Will, or google up random clips of Schicklgruber’s pathetic pageants and see if you doubt the coming Holocaust.

But The Donald would rally the faithful. They’d overflow in Tulsa … then again … and again … and yet again.

He’d mock the infirm, whistle the dog, taunt the libs, deny the virus. Waves of bloodlust would flow from his lips and rise from the grassroots.

Mass beatings would boil the blood. Packed to the rafters, no masks to be seen, the stadia would rock to His charisma. The loyal millions would rally to Donald and his dictatorship for life.

Just the fall election stands in his way. Tulsa would surge him back toward a groundswell blitzkrieg.

But just one problem: The Donald laid a MEGA-Egg.

He didn’t know the Anointed Day, June 19, was also Juneteenth, which he didn’t know was the sacred anniversary of the Texas liberation of his hated Others, the slaves that were freed by that other Civil War, won by the previous Republican who was almost as good a president as him, Abraham Lincoln. In an astonishing moment of shifted power, the date had to be changed.

Then protestors abandoned the arena. Wished-for mass beatings gave way to the illegal arrest of an elderly white woman in a Black Lives Matter t-shirt with a rally ticket in her pocket. It was not the Chicago ’68 image The Donald demanded.

The alleged President of the United States, come to address an adoring citizenry, then confronted an astonishing vision. The outdoor bleachers were empty. Likewise, the indoor cheap seats. Pandemic social spacing was no problem. Face masks were moot.  Everyone in the arena had room to breathe.

Nonviolent activists know the best way to oust a dictator is with ridicule. The late-night pundits have been pouring it on.

But at Tulsa, Trump himself topped them all. Cringing through feeble laugh-lines and lame bigotry, he whined about his old-man’s crawl down a ramp at West Point, where unwilling cadets suffered a shameful rant.

So maybe Trump has shot his wad. Four years of caustic chaos have left the US a smoldering ruin. Hitler used hate and military spending to rally a devastated Deutschland toward mass suicide, with a whiff of revived prosperity in between.

Trump turned a seemingly sound nation into a preventable Pandemic and an economic collapse unseen since Herbert Hoover, who at least was literate.

The great unknown is his lingering clout among the angry uneducated, an inscrutable mass of gun-loving evangelicals who have somehow seen The Donald as some kind of Messiah.

Abortion is his mainstay, though we all know he’d happily fund them for his corps of courtesans.

So too the Johnson Amendment, which bans partisan speech from tax-exempt churches. Trump lies that he’s abolished this law. In fact, he’s just ordered the IRS to not enforce it, sending tax-exempted Dark dollars to be laundered by the Trump cult’s Rolex priesthood, which worships him for it.

But The Donald has just goose-stepped through a peaceful gathering to pose with an upside-down Bible before a burnt-out church whose ministry hates him for it. Some evangelicals have noticed, especially among suburban white women.

Just one thing could still save the Trump dictatorship: a stolen election. Without mass public support, it’s unlikely he can cancel this fall’s balloting. But in league with gerrymandered swing-state legislatures, he can strip the voter rolls, subvert vote-by-mail and rig the vote count.

An emergency election protection coalition is fighting to embed America’s local/state/county election boards with a well-trained volunteer network. By protecting the voter rolls, mastering the complexities of vote-by-mail, and monitoring the vote count, we just might beat the Trump Dictatorship.

Trump’s Tulsa debacle might mean his plans for a blitzkrieg of Nuremberg rallies, like all else around him, will turn to rubble.

And if election protectionists can produce a free and fair voting system this fall, we just might make America a democracy. Are you ready to do it?

(Completion of Harvey Wasserman’s The People’s Spiral of US History awaits Trump’s departure. His radio shows are at prn.fm and KPFK-Pacifica. To join the COVID-19 Emergency Election Protection Zoom Calls, contact him via solartopia.org. Reader Supported News is the Publication of Origin for this work.)