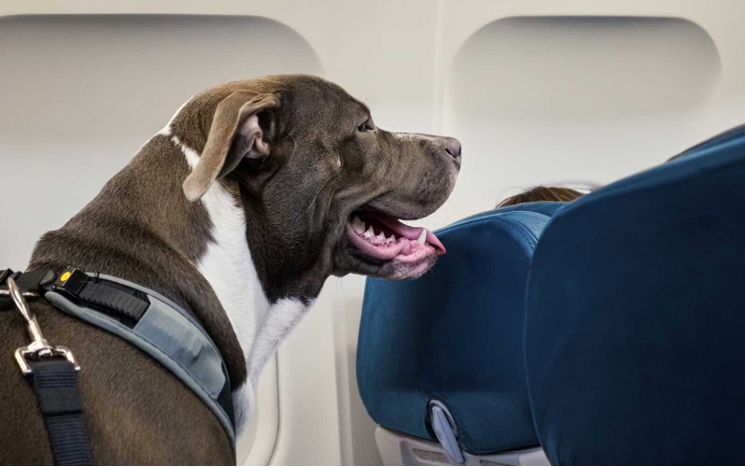 ANIMAL WATCH - On January 1, 2022, a new California law goes into effect to crack down on fraudulent emotional support animals.

This includes the increasing number of falsely registered dangerous dogs (including Pit Bull breeds) labeled by owners and unscrupulous medical providers as ESAs so that landlords are forced to accommodate in multi-unit housing, and which can be taken into work sites where coworkers and even potentially customers are being threatened or attacked.

This law was sponsored by Guide Dogs for the Blind and Canine Companions for Independence, whose well-trained service dogs provide assistance to thousands of persons with disabilities and have become some of the primary victims of attack by purported ESA and fake service dogs whose credentials were purchased on-line for an average of $80-200.

Pawsome Advice reminds us that it costs a minimum of $25,000 to professionally train and register a valid service dog.

LEGISLATIVE ANALYSIS OF THE NEW LAW

The first point emphasized under the Governor’s new law is that emotional support animals (ESA’s) are NOT service animals.

Under ADA guidelines, a service animal is a dog that has been individually trained to perform tasks for an individual with a disability.  An ESA is not a service animal under ADA rules, even though it may be providing (or allegedly providing) comfort and certain minor tasks for someone with mental or psychological disabilities.

But the CA legislative Committee analysis of AB 468 notes that, “an ESA is a dog (or other animal) that is not trained to perform specific acts related to a person’s disability. Rather, the owner of an ESA derives a sense of wellbeing, fulfillment, companionship, or lessened anxiety with the presence of the animal.”

Another difference between an ESA and a service animal is that “ESAs do not enjoy the same legal privileges as trained service dogs.” For example, while federal and state law require that service dogs be allowed to accompany their human partner in public places, ESAs do not have to be accommodated.

“California law currently contains a provision providing that a person who knowingly and fraudulently represents a dog is a guide, signal, or service dog, can be found guilty of a misdemeanor punishable by imprisonment in the county jail not exceeding 6 months, by a fine not exceeding $1,000, or by both that fine and imprisonment.  But there was no similar provision for ESAs – until now,” states Seyfarth Shaw, LLP.

includes a clear explanation of the need for revised standards and penalties in an industry that blatantly advertises the sale of false documentation and accessories that specifically and clearly indicates, “‘Emotional Support Animal,’ and in some instances ‘ESA, Protected Under Federal Law’ which can imply that ESAs wearing such accessories are granted the same rights as service dogs.”

It further notes that “…the emergence of ESAs has led to an increase in the fraudulent selling and subsequent misrepresenting of emotional support dogs as service dogs.”

(2)   A person or business that sells or provides a certificate, identification, tag, vest, leash, or harness for an emotional support animal will also be required to provide the same written notice to the buyer or recipient.

Violation of these written notice requirements or knowingly and fraudulently representing, selling, or offering for sale, or attempting to represent, sell, or offer for sale, an emotional support dog as being entitled to the rights and privileges accorded by law to a guide, signal, or service dog, is subject to a civil penalty of $500 for the first violation, $1,000 for the second, and $2,500 for third and subsequent violations.

(3)   Also, under the new CA law, health care practitioners are prohibited from providing documentation relating to an individual’s need for an emotional support dog unless the health care practitioner (1) holds a valid, active, license to provide professional services within the scope of the license in the jurisdiction where the documentation is provided; (2) establishes a client-provider relationship with the individual for at least 30 days prior to providing the documentation, (3) completes a clinical evaluation of the individual regarding the need for an emotional support dog, and (4) provides notice to the individual that knowingly and fraudulently representing oneself to be the owner or trainer of any canine licensed as, to be qualified as, or identified as, a guide, signal, or service dog is a misdemeanor. Violating these requirements subjects the health care practitioner to discipline from the licensing board.

Housing providers that must make reasonable accommodations for residents who need Emotional Support Animals (ESAs) under the federal and State’s Fair Housing Acts will, under this new law, have new health care practitioner requirements to help them ensure that letters from health providers in support of ESA requests are legitimate.

REALITIES OF MANY ESA DOGS

Sadly, under the cloak of ESAs are also dogs—especially Pit Bulls, Rottweilers and other aggressive-breed dogs—that are used as alleged protection animals, but often entered into fighting matches for gambling or used (or allowed) to attack humans or other animals for numerous reasons, including a lack of training and control.

Also, many of the owners are addicted to drugs and isolated because of episodes of violence. Do we really believe that the dog is treated well and is a loving situation?

These individuals usually do not have insurance on the dog and often their victims also do not have the financial means to get proper medical or veterinary care. These injuries then become a burden on local hospitals, animal control agencies—and, thus, taxpayers.

Does that really matter? The truth is it matters a lot. If your animal isn’t properly trained, it could end up as part of the service dog attack. (Pawsome Advice,)

See also: Emotional Support Animals Can Endanger the Public and Make Life Harder for People Like Me Who Rely on Service Dogs.

The following article provides valuable information on the attempt by an Owner/landlord of a multi-unit property in Los Angeles to evict both the tenant and ESA Pit Bull after it was reported that the dog had attacked and the tenant had violated LA Animal Services’ administrative regulation.

The expert called by the defense had only on-line credentials, and no hands-on animal training of record, but was allowed to testify as an expert.

See also:  Emotional Support Animal or "Fake" Service Dog Attacks – You Could be a Victim

TRAGEDIES OF ESA ATTACKS CAN BE PAINFUL AND EXPENSIVE

DogsBite.Org provides a complete explanation of "Why Breed Matters in Service Dogs and Why Pit Bull Service Dogs are a Bad Idea.”

“American, Delta, United, JetBlue, Spirit, Alaska and Frontier are among the carriers that have said they will no longer allow emotional support animals. ... American says only trained service animals can fly in the cabin starting Feb. 1, while United will stop letting emotional support animals fly after Feb. 28, [2021]” according to the Washington Post.

THANKS TO ASSEMBLY MEMBER LAURA FRIEDMAN

AB 468 was introduced by Laura Friedman (D – Glendale), who listened and acted where there was/is a serious need for regulation and enforcement.

There is no question of the value of our pets in providing emotional support, even without training.  But, there are two sides of owning pets—with every privilege comes responsibility.

Housing providers (public and private) and business owners must (by law) maintain a safe environment for all.  Those who maintain dogs for any reason must also be held accountable for safety and honesty. There would not be fake ESA dogs and an entire industry built up around them, if there were not many who want to bypass the laws and who do not care about others.

Here is the unofficial opinion on the effectiveness of AB 468, which I received from a Los Angeles attorney who specializes in animal law:

“AB 468 is a start.  It won't prevent the widespread fraud that the lack of certification of service dogs enabled by federal law.  But, it can at least help educate the animal-owning public, landlords, and business owners about the legal difference between service dogs and emotional support animals.

We'll have to wait and see if any of the criminal prosecutors who are authorized to enforce these laws will do so, when the penalty is civil not criminal, and they already have heavy criminal caseloads.

Hopefully, this will be the beginning of more widespread recognition of the fraud that is currently rampant.  That fraud frustrates and hurts those who legitimately need ESAs and service dogs, landlords, employers and business owners alike—all of whom are negatively impacted by those who take advantage of the current lack of regulation.”