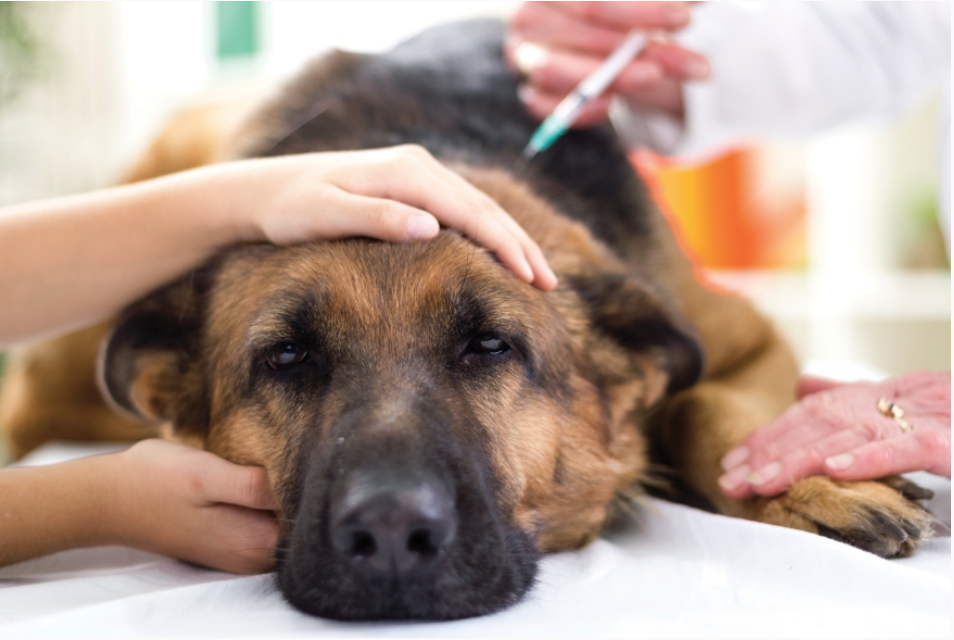 assuring the public that all L.A. Animal Services impounded dogs were receiving vaccinations to control the epidemic and keep the highly infectious disease from spreading to the public’s pets and other shelters.

Thus, Chief Veterinarian Jeremy Prupas was asked by the Commission President to respond and explain the Department’s canine influenza vaccine distribution. The later-published abbreviated minutes of the meeting released by L.A. Animal Services read, “Dr. “Prupas stated that all animals are being vaccinated unless they are not healthy enough to get the vaccine and explained the vaccine protocols.”

But it was no quite that simple.

Ms. Serksnas has obviously given extensive time and research to the alleged number of vaccines that have been administered to LAAS shelter dogs since the Canine Influenza epidemic began at the West Valley and West L.A. shelters. This is not the first time she has questioned assurances by LAAS and advised the Commission that the numbers just don’t add up.

I asked Cathy Serksnas, who is a former VP/GM at Time Warner Cable in LA, holds a   Master’s Degree in Business Administration (MBA) from Pepperdine University, to provide us with greater insight into her conclusion that the  Commission-approved canine flu vaccine proposal from 2019 does not match the financial reports for the last two years.

The Commission agenda for January 8, 2019  (Item 6A) requests approval of $200,000 for Canine Influenza Vaccine, and clearly states:

“The Department has implemented a plan that requires all dogs are vaccinated as part of our impounding protocol. It is important to note here that vaccination does not guarantee that a shelter will not have infuenza cases. The expectation is that there would hopefully be a decrease in both the numbers of animals infected, as well as severity of the infection.”

Fiscal Impact is described as: “Given the number of dogs that are impounded annually (approximately 25,000) as well as boostering dogs that stay in the shelter over two weeks (at least 50%), we estimate that we would require approximately $200,000 (approximately $5 per vaccine) a year to vaccinate all the dogs for Canine Influenza.” (Hear audio here.)

On November 9, 2021, I asked Cathy Serksnas to explain her opinion on discrepancies between Dr. Prupas initial report in 2019 and the unagendized oral report by Dr. Prupas as part of the General Manager’s Report item on the agenda:

Here’s what she shared:

“On January 8, 2019, the Board of LA Animal Services Commissioners approved the use of donor contributions from the LAAS Animal Welfare Trust Fund (AWTF) to purchase Canine Flu Vaccines for shelter dogs at a cost of $200,000 a year (see above.) The proposal was prepared by Chief Vet Dr. Jeremy Prupas, where he outlined the cost and new vaccine protocols for all impounded dogs.

“However, LAAS Financial online reports show that between January 2019 - September 2021, only $97,384 was spent, which was significantly less than what would have be required to properly vaccinate dogs.

“The shortfall in vaccine purchases, compared to the number of dogs impounded, allowed LAAS only enough vaccine to cover 37% of the dogs in 2019, 43% in 2020 and ONLY 4% in 2021.  The total expenditures should have been closer to $315,000--If vaccines were given on the stated schedule,” she explained. 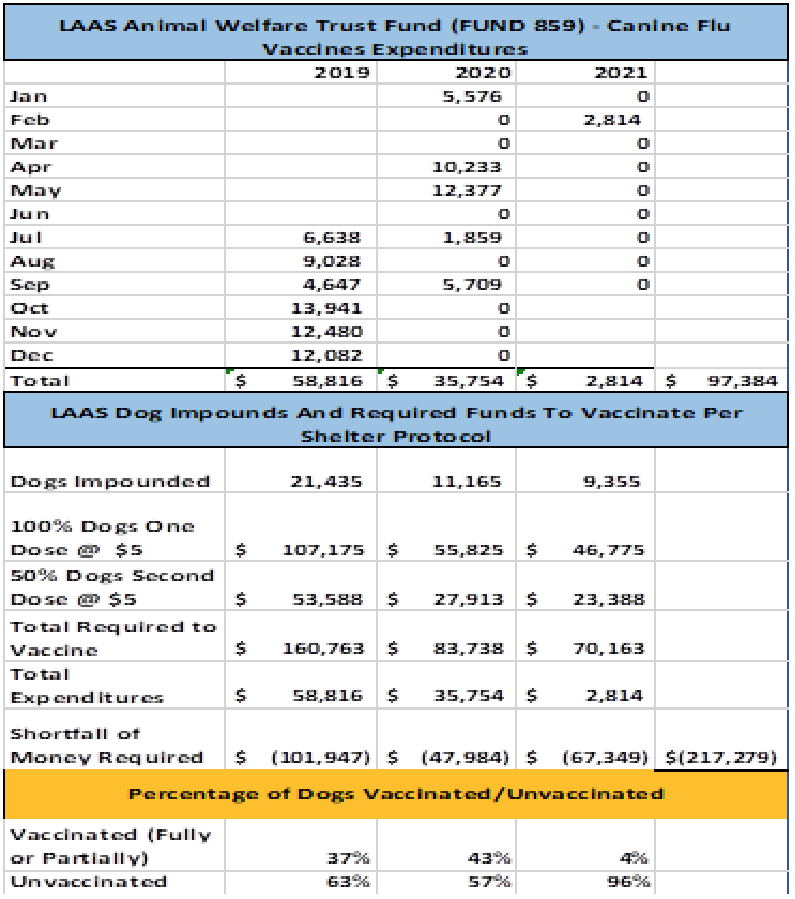 ONATED AWTF FUNDS ARE NOT PART OF THE CITY’S BUDGET!

During her later public comment (after Dr. Prupas’ report/update about Canine Flu Outbreak) she refuted a claim by Dr. Prupas that dogs were not vaccinated, in part, due to “budget” cuts and trying to save City money.

Cathy reminded the Commission that, “The 2019-requested funds are NOT allocated from the budget but were instead approved to be used from the donor-based AWTF, which has nothing to do with the operating budget.”

She reviewed the expenditures saying, “It was impossible to vaccinate all the dogs and that Dr. Prupas’ statement contradicted what GM Brown said in a previous LAAS Commissioners meeting, that dogs were receiving one and possibly a second dose.”

Ms. Serksnas explained that, “Shortly after the Canine Flu Outbreak, GM Brown, indicated in a prior LAAS Commissioners Meeting that all the dogs are getting at least one vaccine and possibly a second after 4 weeks. She then explained how this protection is obtained, “The best way to protect your dogs from Canine Influenza is to have them vaccinated.  The vaccination…requires two (2) doses of the vaccine given two to four weeks apart….”

THE MONEY WAS THERE

Cathy Serksnas stated, “If NOT for the lack of action by Dr. Prupas, in failing to purchase enough vaccines and follow his own impound protocols, we would NOT be in this situation where dogs became so ill that two City shelter basically shut down access to dogs and to adoptions that could have removed them from the shelter environment”

“These dogs are basically under quarantine while they recover from the virus.  Maybe the virus would have occurred anyway but, if the dogs WERE vaccinated, this could have lessened the spread and the severity of the infection.  His lack of action caused widespread and unnecessary suffering of dogs and possible death in more severe cases,” Serksnas said.

It is hard to argue with her conclusion!

“ When canine influenza exposure occurs in an immunologically vulnerable population of dogs, an outbreak is overwhelmingly probable. Some US areas, such as the San Francisco Bay area, have experienced multiple outbreaks. Outbreaks will continue to occur throughout the US until a large percentage of the canine population is protected, providing individual and herd immunity, said Robert Duquette, BVSc, MRCVS, PhD, who has worked with California and Oregon veterinarians during recent outbreaks.

Dr. Duquette explained, “The initial response to an outbreak is vaccinating as many dogs as possible, with the hope that the problem will be resolved. However, this has proven not to be the case. For vaccination to be efficacious it needs to be in place prior to an outbreak. Bivalent vaccination also needs to be maintained within a community to achieve herd immunity.”  (See this complete and very easily understandable booklet in its entirety here.)

Dr. Prupas stated in his impromptu explanation to the Commission on November 9, that to assure the public that the outbreak at the West Los Angeles and West Valley shelters was under control every dog was NOW being given at least one vaccination for the deadly disease and a second shot if they were still impounded after two weeks.  However, he admitted that there had been a “one-year hiatus” since 2019 because of the tightening of the City budget.

Apparently he and the Commission had forgotten (or ignored) that the funding was provided by the Animal Welfare Trust Fund, which is supported entirely by donations.

Even at the end of his lengthy discussion, one of the Commissioners recapped that this entire matter was an issue of the public “mistrusting the use of tax money.”

No, this was an issue of the public finding the Chief Veterinarian and General Manager of Los Angeles Animal Services in violation of trust regarding the care of shelter animals and something that had a critical impact on the closing of City animal shelters. Hear Commission audio here.)

Dr. Prupas stated that the program which had begun in 2017 (after an outbreak of Canine Influenza in the Southern CA area) to provide at least one shot per dog—and a second shot if the dog was in the shelter longer than two weeks.

This program was curtailed in 2019 for a year because of budget cuts.   (But, the money, as emphasized by Cathy Serksnas was from the Animal Welfare Trust Fund, which regularly  reports ample money available in the account, due to the generosity of caring  individuals.)

He also compared it to the human COVID protocols, but his approach does not fit.  COVID compliance has not only REQUIRED an initial and follow-up shot, but also is now urging another booster shot, so obviously there is the belief that vaccinations are merely prophylactic, but necessary for the continued health of the individual and to develop “herd immunity” in humans.  And experts agree this works for dogs also.

Dr. Prupas explained that providing the vaccines does not guarantee that there will not be outbreaks at the shelters because dogs may be entering the shelter that have already contracted the disease before being impounded, and  that, because the immunity created by the vaccine does not develop fully until they have had both shots, they still may expose other dogs.

IS THE VACCINE WORTHWHILE?

However, he also said that they are studying the effectiveness of the vaccine to evaluate whether it is even worthwhile to make this financial investment in providing the Canine Influenza vaccine to shelter animals because it is-more expensive and is not recommended as a “core” vaccine.  In other words, is the cost is worth the benefit?

He stressed that the University of Wisconsin will be using the LAAS data to do a paper on the vaccine usage. He was not clear whether the “paper” would be on the benefits of the vaccine or the cost or the fact that vaccinations were discontinued for a year.  Could there be a conflict of interest?

Maddie’s Fund shows that Dr. Prupas is part of their “Fellowship” program and the University of Wisconsin is also part of that group.  Does this multi-million-dollar charitable organization  know that the vaccinations were stopped and not resumed until the 2021 outbreak, even though money was available?

“There was no reason to just leave available funding unused,”Cathy Serknas says.  “The question is why would an elaborate scheme be devised to deceive and endanger the animals when the money is still sitting in the fund?”

We are still left with another question, did LAAS officials think it wouldn’t be noticed?  Did the Department of Animal Services have other plans for the balance of the $200,000?

And, when did they intend to issue the  announcement to the public (many of whom donate to the AWTF) that they had changed their mind and that, for one year, the dogs’ lives weren’t really worth investing the $5 shot that could potentially save them?