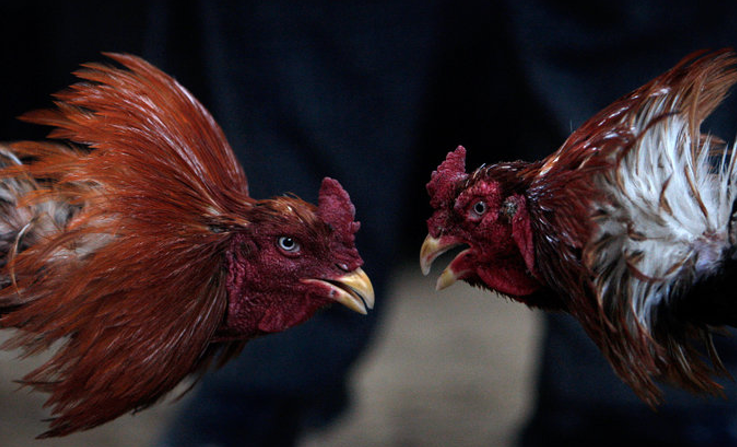 Detective Joel Bronson told reporters that suspects were identified but no arrests made, pending the outcome of the examination of the birds by LA County Animal Control veterinarians, according to the Los Angeles Times.

"The sheriff's department typically launches investigations based on complaints about noise and sanitation from neighbors," according to Detective Bronson, who added that, "Prior to coronavirus restrictions making it harder to raid suspected cockfighting operations, sheriff’s officials typically executed a search warrant every month or two."

On August 3, 2020, Sheriff's deputies raided a Chatsworth property in the San Fernando Valley to investigate alleged animal cruelty and possession of gamefowl for fighting purposes. They found 2,000 to 3,000 roosters that were being bred for cockfighting. (See:  Cockfighting, COVID-19, and Newcastle Disease – A Deadly International Trio).

In May 2017 a cockfighting bust in Val Verde, near Santa Clarita, also in the northwest area of Los Angeles County, resulted in the seizure of over 7,000 fighting cocks and numerous fighting implements.  Deputies found a variety of weapons believed to be used in cockfighting contests, and hundreds of gaffs, or slashers, used on roosters’ claws. Syringes and steroids for the animals were also reportedly recovered.

Bloody bodies of roosters in trash bags, with deep slashes and gouged flesh depicted the violent and painful manner of their deaths. Caged hens and chicks confirmed on-going breeding operation to perpetuate the lucrative gambling activities which are the impetus for all "blood sports."

The seizure was called the largest illegal cockfighting bust ever in the U.S., Los Angeles County Sheriff’s said.

The property was the subject of a similar action in 2007, when more than 2,700 illegal cockfighting birds were seized, the County Board of Supervisors acknowledged.

In October, another ring was busted in Lancaster. More than 450 game fowl believed to be used in illegal cockfighting were seized, according to the Daily News.

There were no subsequent reports that these "believed to be" or "involved in" busts resulted in meaningful prohibitions, criminal arrests or convictions, although cockfighting is either a misdemeanor or felony in California.

Nor does there appear to have been any serious effort to limit the number of gamefowl that could be kept on the properties (there was no indication that these were licensed businesses.)

So, what would be the other reasons for keeping dozens, hundreds or thousands of roosters and cockfighting paraphernalia?

In a February 4, 2021, article, "Corruption case targets 11 in small Los Angeles County City,"  MyJournalCourier.com reported that District Attorney George Gascon announced  a former Mayor of the City of Maywood and ten other people had been charged in a "pay-to-play" public corruption case".

"Ramon Medina, 61, a former mayor and councilmember of the City of Maywood--just a few miles from Los Angeles -- was charged in a 34-count complaint with soliciting bribes, conspiracy, embezzlement, grand theft, misappropriation of public funds and other crimes. The report states the 'other crimes' include. . . having gamecocks and cock fighting paraphernalia."

On February 5, 8NewsNow (Las Vegas) reported that two Elko County, NV, men were  convicted of numerous crimes related to an illegal cockfighting operation where over 300 fighting roosters were discovered at a home during a drug raid. The multiple felony charges were "related to the torture and housing of the birds, as well as possession of cockfighting equipment."

“The whole purpose of raising roosters in this regard is to fight them. It’s done as gambling and pleasure, and just attending these fights is a crime in the state of Nevada,” said Metro Detective Robert Sigal, Las Vegas Metropolitan Police Department – Animal Cruelty Unit.

Las Vegas police said each rooster could be worth hundreds — or even thousands — of dollars.

Cockfighting is illegal in all 50 states in the U.S. and a felony  in 42 states. The possession of birds for fighting purposes is prohibited in 39 states and being a spectator at a cockfighting event is illegal in 43 states.  It is also a federal crime, prosecuted under the United States Animal Welfare Act, 7 U.S.C. § 2156(a).

it can be a felony or a misdemeanor in California, where it is also a crime to attend such an event.  California has significantly increased the penalties for engaging in, sponsoring, and selling equipment for or attending a cockfight. (CA cockfighting laws are found under Penal Code Section 597.)

One of the most informative profiles of cockfighting and "cockers" (what cockfighters call themselves) is  Why Cockfighting Persists -- (Cockfighting, Barbarism or Tradition) by Deborah Kennedy, who concludes, "Raising and fighting game cocks might be illegal in all 50 states, but, thanks in part to inconsistent, state-by-state sentencing guidelines and the difficulties involved in prosecuting it on the federal level, cockfighting is alive and well in the U.S."

There are thousands of thousands of people engaged in this illegal enterprise," warns Wayne Pacelle, President of the Animal Wellness Action, a national advocacy group that investigates and studies cockfighting activities across the country, and is demanding stricter laws and enforcement  He further states:

The United States has become the cockfighting breeding ground for the world, with cockfighters here shipping tens of thousands of birds all over the world to fighting destinations. In order to sell birds for higher prices, they must continually fight birds at home and abroad to show that they have winning breeding and training ability, says Wayne Pacelle, President of the Washington, D.C.-based organization, Animal Wellness Action (AWA). "They are, however, now facing more robust enforcement actions than ever, with our determined efforts to enact new laws and see that they are put to use on the ground."

It appears these efforts are getting results at the federal level. Last month the U.S. Court of Appeals for the First Circuit affirmed the constitutionality of the federal law against animal fighting as applied to Puerto Rico. On January 14, the three-judge panel handed down the ruling, "We affirm the district court’s decision and hold that Section 12615 is a valid exercise of Congress’s Commerce Clause power and does not violate plaintiffs’ individual rights.”

"This removes any thread of an argument that cockfighters in the Commonwealth can continue to legally stage animal fights there," Pacelle states.  (Animal Wellness Action and its affiliate organizations had filed briefs in support of the United States.)

Los Angeles County law enforcement seems to be making repeat visits (responding to complaints about "noise and sanitation") to the same locations, finding the same circumstances (roosters and cockfighting appurtenances) and getting the same results -- media reports. What are we doing wrong?

“California has comprehensive prohibitions on cockfighting and related activities – such as a ban on possessing animals for fighting and possessing fighting implements – but the penalties for this crime are among the weakest in the West," says Wayne Pacelle of Animal Wellness Action (AWA). " The law must be strengthened because California is clearly a national hub for cockfighting and a breeding ground for shipments of fighting birds to Mexico, Central America, and several Pacific Rim destinations."

"During a four-year period, only one other state sent more fighting birds to Guam for illegal fighting there than California,” he advised.

THE UNSEEN DANGERS OF COCKFIGHTING

Cockfighting is a lucrative, criminal, gambling activity that is difficult for law enforcement to effectively address unless police arrive during an event. Neighbors are afraid to report known or suspected cockfighters because of the violent nature of the sport and its aficionados.

It also often involves human trafficking--with young male victims forced to maintain the premises and the birds and young girls provided for the sexual pleasure of attendees.

Cockfighting is not a cultural or ethnic issue. It is animal cruelty in a disturbing, perverse, public display of brutality. Participation for generations does not make it acceptable or excusable. These events commonly include use and sale of drugs and  guns. Participants and spectators attend for one main purpose – to watch animals die.

Cockfighting is not a “sport” in which the bout ends when one rooster proves its superiority. The long, sharp blades attached to the feet assure that the cutting and stabbing will be lethal to at least one of the fighters. The death or inability of a bird to continue brings cheers from bloodthirsty spectators as numerous bouts continue.

When these events are held in backyards, the worst members of society converge upon neighborhoods where children and innocent adults also become victims of noise, violence and exposure to criminals who would not otherwise be in the community.

Young children are often brought to watch these barbaric displays. Nothing desensitizes a young person to pain and death more than illegal animal fighting. It is a precursor to taking human lives and a passage into gang activity.

Cockfighting is blatant animal cruelty in one of its ugliest forms. Enforcing serious criminal and financial penalties may be justice for the birds; but it is also a vital  protection for nearby residents who are being victimized repeatedly by those with no concern for their safety or peace.

(If you would like to read more on this issue, sign up to receive the CityWatch bi-weekly newsletter)

Part of the above previously appeared in the LA Daily News, "Cockfighting Not a Cause for Crowing."

(Phyllis M. Daugherty is a contributor to CityWatch and a former LA City employee. She is currently employed by the U.S. Postal Service.) Photo: Behrouz Mehri/AFP/Getty Images. Edited for CityWatch by Linda Abrams.