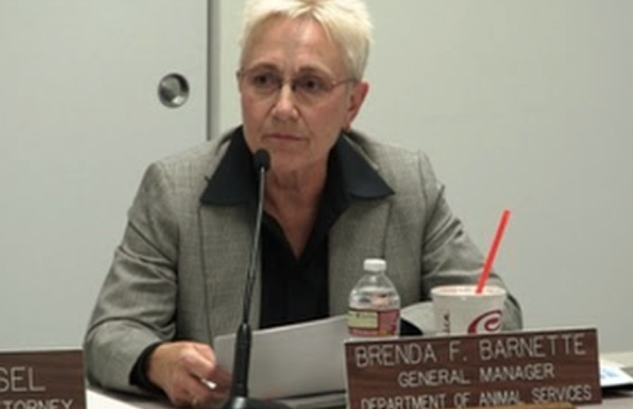 ANIMAL WATCH--General Manager Brenda Barnette has unveiled her latest plan for Los Angeles Animal Services on the official City site as a "Proud Pilot Shelter," which oddly features ONLY photos of adult Pit Bulls for adoption/foster.

She explains LAAS is now part of the HASS program (Human Animal Support Services) which is a national program to keep animals out of shelters.

Did I miss the posting of a public hearing that asked for City residents' opinions, agreement by the Commission, Neighborhood Councils, and the City Council?

There is no mention of donations funding the protection of the public and assure animal safety and welfare and compliance with laws in Barnette's announcement.  Are these seminal and primary duties of L.A. Animal Services as a public, tax-funded animal-control agency being ignored?

WHO IS INVOLVED IN THE HASS PROJECT?

Human Animal Support Services (HASS) is an international coalition of animal services leaders and more than 30 pilot organizations transforming the traditional sheltering system to serve the entire community in supporting the human-animal bond, according to the KC Pet Project.

When was this agreement reached and who approved it?  Barnett has to run all changes through the Mayor's Office.  Could the persuader have been the wealth and prominence of first two major organizations listed on the LAAS site as initiating and supporting this "Shelter Pilot Program" as American Pets Alive?

The first is Maddies Fund (the founder of which reportedly left his estate valued at approximately $7 billion to this animal society) and Michaelson's Found Animal Foundation, with Gary Michaelson listed by Forbes at a net worth of $1.7 billion.  (They are followed by a list which can be read on the LAAS announcement)

So, with this level of wealth behind the program to foster lost and homeless pets in homes in the community, why does this announcement by GM Barnette on the LAAS website prominently feature a very large "DONATE" TO L.A. ANIMAL SERVICES" icon?

Last week she was expounding on the virtues of her plan to "reconstitute" the badly needed West Valley Animal shelter into a "Community Service Center," providing cost-free space to 'rescue' organizations to grow their non-profit businesses and a rental advocacy office for pet owners, but no space for impounding animals from the Valley community which is paying for the shelter.  And there was no concern about the fact that all areas of the Valley and city would be impacted

Are struggling Angelenos going to be required to continue paying Barnette’s $315,000 tax-funded annual salary?  And, with reportedly almost empty shelters, what is she doing (now and in the future) with her $42,922,034 budget?

WHY IS ONLY ONE BREED (OR BREED-TYPE) FEATURED AS A FAMILY PET?

There is no question that some dog owners prefer Pit Bulls or bully breeds and realize the extreme caution that must be exercised to assure responsible control of these very strong--and often unpredictable--dogs.

However, we cannot overlook that Pit Bulls were responsible for the highest percentage (22.5%) of reported bites across all the statistics included  in a 2019 published study by the American Animal Hospital Association, followed by mixed breeds (21.2%)--which is Barnette's designation for Pit Bulls on the LAAS adoptable dog search. German shepherds were next at 17.8%.

Pit Bulls and "mixed-breed" dogs were found to also cause the "highest average damage per bite," the study concludes.

In a more definitive physical description that includes reports of dog bites by an unknown breed, the AAHA explains factors considered, "Those additional factors included weight and head shape. The findings showed that dogs with short, wide heads who weighed between 66 and 100 pounds were the most likely to bite."

"We can do a lot to protect our best friends from dangerous situations and prevent them from becoming another number in the dog bite statistics. Passing ordinances and adding laws is not the answer. Good judgment is the key to making our lives with dogs safer and more enjoyable. In turn, they will repay us with a lifetime of unconditional love and loyalty," she writes.

Where is the alert to immediately call for assistance by an Animal Control Officer if you believe you in danger of attack by your own or any other dog?

Regardless of the excuses or reasons to which bites are attributed, most dogs find a way to avoid attacking--especially people who love them.  But the records of Pit Bull attacks on totally innocent victims--walking down the street, children playing in their own yards or recently adopted from shelters--is staggering.  (See National Pit Bull Victim Awareness and Map of attacks – 2020.)

With animals not being brought to the shelter now and in the future, based upon Barnette's announced intention to require appointments, etc. more animals will be dumped in the streets and be killed or severely injured in accidents.

This will also expedite the return of dangerous dog packs roaming the city and attacking pets and humans.

After COVID restrictions are lifted, LAAS forcing a time schedule for the animals to be accepted, based upon management's convenience, is not acceptable.  Animal emergencies do not occur on a schedule, and 24-hour service and availability are part of why GM Barnette and LAAS has a high budget.

Curtailing the public's access to shelters will also result in Animal Care Technician reductions in staffing.

Why would a General Manager not only willingly agree to this, but actually cause it to happen, if she is sincerely interested in animal/public safety and welfare?

THE IMPORTANCE OF ANIMAL CONTROL OFFICERS

One of  most critical part of keeping a city and its animals safe is the presence of Animal Control Officers in the field, responding to calls about  and taking action on behalf of endangered animals, off-leash dogs (which also eventually stray and become dangerous dog packs), maintaining noise control and animal-limit rules, and responding to calls about lack of humane care for any animal.

Yet, the new ACO's who have finished or are finishing training and should be responding to the thousands of calls to LAAS, are instead being used to hand out COVID-19 packets to the homeless, according to reports.

LAPD AND LAFD - DO NOT ENFORCE ANIMAL-RELATED LAWS

When Brenda Barnette--who came from a small WA humane society in 2010-- was confirmed by the City Council, she said she would rely on LAPD to enforce laws.  She was quickly corrected by a Councilman who reminded her, "LAPD is too busy.  It is your responsibility to do animal law enforcement."

Although LA Police Officers and LA Fire Department may respond to emergency calls about dog attacks to assure public safety or provide medical response, neither department is trained nor does their responsibility include handling attacking dogs.

And, although in the past, police officers have responded to assist an Animal Control Officer endangered by Pit Bulls or other dangerous dogs, in the current climate of assertions of police officers using excessive force, it is probably safe to say they are not going to risk having to shoot a charging Pit Bull and incur public wrath and months of desk assignment and paperwork.

L.A. Animal Services has the responsibility to maintain a sufficient staffing and back up of officers to handle these situations.

LA Fire Department medics respond for medical attention but do not interact with animals.  Plus, animal calls are not their responsibility.  They need to be available to respond to fires and endangered humans.

How would you feel if your home burned down and/or you lost a loved one while your local fire station responded to a dog/cat call which is not an authorized or required duty?

Brenda Barnette's current boasting about placing microchip readers at fire stations so the department or the public can identify a chipped dog seems to be in support of her plans to close shelter operations and her assumption they will potentially take on more responsibilities for LAAS.  This is like LAFD issuing an extinguisher at each home in a community and advising they are closing the local station.

Also, the microchip reading may come to an abrupt end upon the first attack on a fireman by a dog who considers a stranger reaching over his neck with a strange object to be an act of aggression.

LAAS MUST BE GUIDED BY REALITY, NOT DONATIONS and "NO KILL" POLICIES

No one wants to see animals euthanized other than to stop suffering, but dangerous behavior cannot be ignored, and the reality is that sometimes this is due to genetics or history of the animal (regardless of species or breed.)  We pay the GM of Animal Services to make difficult decisions wisely for the protection of animals and humans.

If Barnette cannot do this, then she is in the wrong job.  She should find another small humane society, where only adoptable animals are accepted.

LAAS is a municipal shelter that must be open to all unwanted animals and the lost, injured or abused.  It cannot shut its doors on these creatures--no matter the time of day or night because that is the agreement it has with taxpayers.

And there must be a qualified L.A. Animal Services employee there to receive and evaluate the animal and attend to its immediate needs.

Members of the public, no matter how well intentioned, are not bound by the laws that require certain legal obligations to be met, and the power of law that can enable immediate investigation, if necessary.

Animal Control Officers have the unique duties to protect animals from people and to protect people from animals.  Both are essential for a humane society...or people will take the law into their own hands

Regardless of her contacts with wealthy organizations, the future of public safety in Los Angeles is at stake and cannot be decided by statistics that bring donations, but by the reality of everyday life.

So, if Barnette intends to run the second largest animal-control department in the nation as an outsourced "foster" agency--based on her  excuse that the Department's almost-$43,000,000  budget is insufficient,  why do we need her?

Let's find someone who can do the job that the City needs and deserves--not someone who spends her time figuring out how NOT to do it!

(Phyllis M. Daugherty is a former City of LA employee and a contributor to CityWatch.)