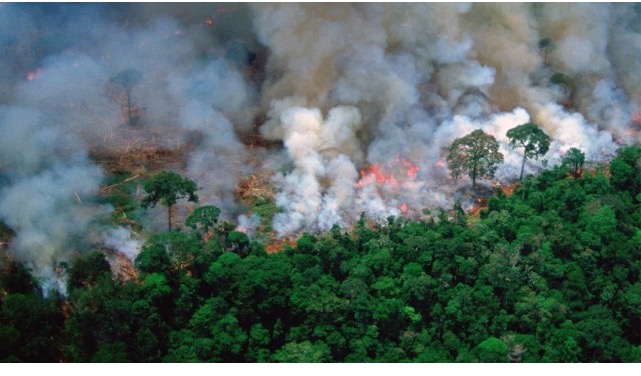 CLIMATE WATCH - The ecosystems of the world that support life like Brazil’s Amazon rainforest have an incompatible relationship with far right governments, like the United States under Trump, who took a baseball bat to the EPA.

According to Christine Todd Whitman, who headed EPA under George W. Bush: “I’ve never seen such an orchestrated war on the environment or science.” (How Trump Damaged Science – Why It Could Take Decades To Recover, Nature, Oct. 5, 2020)

As devastating as Trump (4 more years?) was for the environment, President Jair Bolsonaro’s MBGA or Make Brazil Great Again has one-upped Trump. He’s single-handedly destroying the world’s largest rainforest. It may be the single most important ecosystem for the survival of Homo sapiens. As such, with such a big important target to ravage, Bolsonaro’s making Trump look weak.

MBGA Bolsonaro has denied the existence of massive intentionally lit fires in the Amazon rainforest, calling the public reports “lies” despite data produced by his own government monitoring satellites showing tens of thousands of fires. The MBGA Bolsonaro forest-clearing fires have raged like never before in Brazilian history. The fires are intentional to clear land for development, as armed men in combat boots crunch across smoldering ashes whilst hunting down/killing obstructionist environmentalists.

“Brazil is among the most dangerous countries in the world for environmental defenders and journalists. A recent study estimates that at least 20 environmental activists were killed in Brazil in 2021 alone.” (Source: A Violent Tragedy Foretold in the Amazon, NPR, June 17, 2022)

Bolsonaro’s fires have finally done the job so completely, so thoroughly that the Amazon rainforest has reached its tipping point, no looking back on a downward slope to a barren savannah replacing eons of thick moist forest. For decades climate scientists have warned that once a certain amount of the forest is lost, it will no longer be able to hold the necessary moisture and regenerate rainfall to support itself.

The Amazon Network of Georeferenced Socio-Environmental Information (“RAISG”), a consortium of civil society orgs from Amazon countries use forest coverage data to map how much of the Amazon has been lost since 1985. Forest density and rainfall patterns and carbon storage capacity are also studied. Accordingly, carbon storage and self-regulation of precipitation are indicators of the rainforest capacity to survive.

The RAISG report found that 33% of the Amazon remains pristine 41% registered low degradation and 26% beyond restoration. Areas of dense rainforest are already turning into savannah and trees in the north have stopped producing fruits. The composition of the rainforest is changing right before our eyes.

According to Marlene Quintanill of RAISG: “The ecological response of the forest is changing and its resilience is being lost. We are at a point of no return.” (Source: The Amazon Rainforest Has Already Reached a Crucial Tipping Point, NewScientist, September 5, 2022)

Carlos Nobre, University of Sao Paulo, who has been running climate models for three decades to understand when the Amazon could reach its tipping point says: “Unfortunately what we’re seeing today is no longer based on models. What we are seeing today is observations across the entire southern Amazon that indicates that the risk of this tipping point is immediate. The RAISG study showing the high levels of deforestation and degradation is very, very, very worrying,” Ibid.

The length of the dry season in the southern Amazon, which makes up a third of the entire rainforest, now lasts four to five months, five weeks longer today than it was in 1999. According to Nobre, if it reaches five to six months, it will no longer survive.

Crucially for the future and survival of the Amazon, Brazil is about to hold a national election, scheduled for October 2nd between incumbent President Jair Bolsonaro (67), since 2019, and former president Luiz Inacio Lula da Silva (76), presidency from 2003 to 2011.

According to The New Republic, The Amazon Rain Forest’s Future is on the Ballot in Brazil, August 18, 2022: “Put Bolsonaro’s record next to that of his challenger, former president Luiz Inácio Lula da Silva, and it’s easy to see why the Amazon is shaping up as a key campaign issue. Lula, as he is known, presided over a drastic drop in the rate of deforestation during his eight years as president (2003–2011), a feat that is all the more impressive given that Brazil increased its soy and beef exports at the same time.”

With the national election less than a month away, polls snow leftist candidate Lula with a double-digit lead. Nevertheless, for months now, Mr. Bolsonaro has attacked Brazil’s electronic voting machines as “rife with fraud.” And convincingly told supporters that election officials are aligned against him, suggesting he may dispute a loss. In a June speech, he said: “If need be, we will go to war.”

“According to interviews with more than 35 Bolsonaro administration officials, military generals, federal judges, election authorities, members of Congress and foreign diplomats, the people in power in Brazil feel confident that while Mr. Bolsonaro could dispute the election’s results, he lacks the institutional support to stage a successful coup.” (Source: The Question Menacing Brazil’s Elections: Coup or No Coup? The New York Times, August 22, 2022)

What happens in Brazil over the next several weeks will determine the fate of the Amazon rainforest. It may be the most important election of this decade. Well, come to think of it, actually it’s the most significant election of this 21st century. The rainforests hydrological role for the planet extends all the way to the cornfields of Iowa and across the oceans. The Amazon embodies the essence of life for our biosphere. Nothing else comes close to its significance for life on the planet other than the Great Barrier Reef for ocean life.

“Amazon rainforest, 60% of the world's remaining rainforests, plays a critical role in the global water, energy, and carbon cycles. Evapotranspiration (ET) is a key component of the surface water and energy balance, through which the Amazon forest transfers a large volume of water from the land surface to the atmosphere. Therefore, any change of ET over Amazonia may affect climate at the regional and global scales.” (Source: Estimation of Evapotranspiration of Amazon Rainforest using the Maximum Entropy Production Method, Geophysical Research Letters, 10/29/2019)

“Synergistic trends in Amazon economies, forests and climate could lead to the replacement or severe degradation of more than half of the closed-canopy forests of the Amazon Basin by the year 2030.” (Source: Interactions Among Amazon Land Use, Forests, and Climate: Prospects for Near-Term Forest Tipping Point, The Royal Society Publishing, May 27, 2008)

Electronic machines were first used in 1996 and the first nationwide, electronic-only vote took place four years later. Today, results from more than 150 million eligible voters are presented mere hours after polls close. And no significant fraud has ever been detected.

Bolsonaro critics claim his strong admiration for and emulation of former president Trump has prompted him to challenge the election well ahead of his likely loss. Meanwhile, the Amazon rainforest has two thoughtless (ill-advised, reckless, doltish) adversaries with far-reaching influence that need to be eliminated, somehow, someway, whatever it takes, the sooner it happens the better for life.

On October 2nd the planet is on the line.