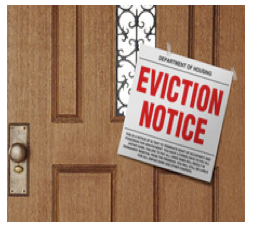 PERSPECTIVE--For someone who purportedly wants to lead the charge to fight homelessness, City Council member Felipe Fuentes is quick on the eviction trigger.

Acting as if he were LA’s version of the Soup Nazi, Fuentes told Sunland Tujunga Neighborhood Council, “No space for you!”

My colleague at CityWatch, Denyse Selesnick, did an excellent job of summarizing the timeline of actions leading up to Fuentes’ sudden notice to Sunland Tujunga Neighborhood Council that the locks to the facility they share with the councilman’s office would be changed on October 15th.  The NC will be denied access to its small, 300-square-foot office space. That’s next week; close enough to Halloween to constitute trick-or-treat, with emphasis on the trick.

The space arrangement goes back to former council member Wendy Greuel’s days, when STNC was part of CD2.  Her successor, Paul Krekorian, honored the agreement. The memo of understanding does state that 30 days notice must be provided to the NC in the event the space was to be re-purposed.

Replacing city-chartered STNC will be two independent non-profits: LA Family Housing and the LA Conservation Corps. So much for being part of the “city family” – a term local politicians often use to describe an invisible bond among the components of municipal government. Make no mistake: STNC is an official part of the city’s structure of governance. Fuentes appears to believe otherwise.

Now, I am not taking a position as to whether the two non-profits are more or less worthy to occupy the space. Nor am I arguing that Fuentes can or cannot act on the termination provision in the MOU.

What I am saying is an entity created under the city charter deserves better treatment. The space arrangement has been in existence for eleven years, plenty of time for the neighborhood council to become ensconced in its setting, with a track record of assisting the community (including the homeless, I might add), and acting as a conduit between the public and the council member’s office.

Pulling the rug out from under STNC is not only disruptive to its mission, it will likely take a large bite out of its annual $37,500 budget.  Unlike the non-profits who will soon occupy the premises, neighborhood councils cannot raise funds.

To add salt to the wound, Fuentes did not offer any assistance to relocate STNC despite having leverage with the General Services Department. Surely, there were other options as far as city-owned facilities go or services to facilitate an orderly relocation.

Why would the council member act so recklessly?

As Denyse Selesnick suggested, it may have something to do with several STNC members who openly supported Patty Lopez in her successful challenge to incumbent Assembly Member Raul Bocanegra. They did so as private citizens; not in the capacity as elected board members.

Bocanegra was Fuentes’ former chief of staff who helped his former boss by placing Fuentes on his office payroll while he was waiting to take his seat on the City Council – a much better deal than unemployment!

Bocanegra was upset by Lopez despite an overwhelming advantage in money and organization.  It was undoubtedly embarrassing  to both men.

It also challenged Fuentes’ reputation as a person who pulls the strings.

It is reasonable, then, to assume Fuentes acted vindictively.  There is no other logical reason for treating duly-elected, respected  civic volunteers so callously.

Yet another example of City Hall’s disrespect for the neighborhood council system.

The motions Fuentes presented to approve moving the non profits to the facility stated the space was vacant.  Had he disclosed that STNC was using it, some members may have objected.  In other words, he misled his colleagues on the City Council.

Council members should not be allowed to fabricate the content of their motions in any event.  To do so at the expense of neighborhood councils undermines grassroots democracy and may even violate the City Charter. Fuentes exposed his utter contempt for the NC system by not disclosing the facts.

(Paul Hatfield is a CPA and serves as President of the Valley Village Homeowners Association. He blogs at Village to Village and contributes to CityWatch. The views presented are those of Mr. Hatfield and his alone. They should not be construed to represent the opinions of the VVHA or the residents of Valley Village, individually or as a group. He can be reached at: phinnoho@aol.com.)