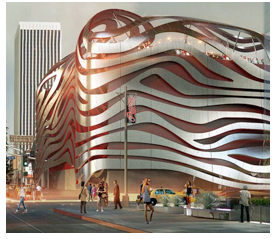 EXCLUSIVE TO CITYWATCH--City planners, developers, community members and other stakeholders are having a block party in the Miracle Mile: no champagne but plenty of stress served to order, depending on who you're aligned with. Issues with development: take a seat. Raising hundreds of millions of dollars for development, take several seats. Here just for the show, standing room only. This party will last a while and feature many hangovers.

Several new developments are taking place in the two blocks of Wilshire running west to east, from the corner of Wilshire Boulevard and Fairfax Avenue that marks the Miracle Mile gateway to Museum Row, one of the most significant cultural hubs in Los Angeles. About to become even more important, even domineering, with a new makeover at the Petersen Automotive Museum (photo above), the forthcoming groundbreaking for building the Academy’s Museum of Motion Pictures, the reimagined LACMA, and the opening of Metro’s Purple Line Extension of the subway. All to be completed before the subway opens in 2023.

Movie stars and moguls, car buffs, museum chiefs and billionaire trustees, mass transit and mobility experts, homeowners and renters, new urbanists, land use advisors at the neighborhood council and a freshman councilman in the district office, even the ghost of Cecil B. DeMille, are all making their presence felt as Act One of the 21st Century transformation of Museum Row opens.

This birth is now unfolding before an expectant and nervous community of homeowners to the south of Wilshire, and a significantly far larger population of renters to the north of Wilshire. Both constituencies will feel the brunt of the building campaigns over the next few years of constant construction, as will the thousands of people who work daily in the Miracle Mile. No single element of this troika of workers, renters and homeowners has it better or worse than the other during this process. All are equal.

As the wheel turns, homeowners will benefit from the appreciation of their properties, and they, as well as renters, will find themselves living in a world class neighborhood that will come to see as one of the most desirable in Los Angeles, located in the nexus of a culture and transit hub unmatched anywhere in the city.

With museums focused on art, movies, cars, ice age discoveries, and crafts and folk arts, Museum Row is poised to become a unique peer to Washington D.C.’s National Mall and Museums, and Chicago’s Museum Campus, and will provide visitors with a wide choice of collections and special exhibitions, public programming and education. This prize does not come without some short-term pain. Descendants of today’s residents, who will enjoy these quality of life enhancements in their neighborhood, may wonder what all the commotion was about.

The children in today’s Miracle Mile families are growing up as new urbanists that understand the mobility options of walking, biking, skateboarding and public transit as alternatives to the lifestyle choice of congesting the roads with the traffic that their parents are held hostage to, through their insistence on seeing the automobile as the only means of transportation. The transit and mobility plans connected with the Museum Row growth, especially what Metro is doing with several transit routes and a subway, will help meet the needs of a new generation.

These kids will thank their parents for not selling their houses when the dust and dirt and noise descended, and for not having been too skeptical about the inevitable changes as lifestyles modernize, population increases and higher density becomes a fact of life in a Southern California region that is the envy and destination of people worldwide.

Unlike other neighborhoods impacted by the city’s fast-paced drive toward higher density, the growth in these two blocks of Museum Row will not add permanent residents in newly built housing, or new stores that drastically increase commercial and retail traffic. This boom does not fall into the category of transit oriented development that is sweeping across the city that brings mixed used towers with apartments and condos in upper floors and retail at ground level, with a bus stop at the curb. The saving grace of this huge building program, split among the four key stakeholders of Metro, the Petersen, the Academy, and LACMA is that it falls into two less-invasive categories: a subway, and three museum projects.

The dirt must turn, the slurries will slosh, the dirt trucks rumble, and the jackhammers and pile drivers pound as the community of all stakeholders comes to terms that becoming a world class neighborhood will take some getting used to, and by making personal adjustments for growth.

Ethereally observing these developments may be the legendary movie producer Cecil B. DeMille who, besides making movies, had his own air field in the Miracle Mile called DeMille Air Field Number 2, located at the northwest corner of Wilshire and Fairfax in the early 1920’s. Directly across the street, on the northeast corner, is the former May Company department store (photo right) that is being repurposed as a movie museum by the Motion Picture Academy.

He was also a co-founder of the Academy. Consider DeMille standing at the Wilshire Fairfax intersection in 1920 and, even with his wide ranging imagination and skills as a spectacular showman, ever thinking he could be standing at the exact same spot, exactly one century later, and be watching a museum dedicated to an art, then nascent, that he was so instrumental in building, rise before his eyes.

His descendants may like an invite to the party.

(Tim Deegan is a longtime resident and community leader in the Miracle Mile, who has served as board chair at the Mid City West Community Council, and on the board of the Miracle Mile Civic Coalition. Tim can be reached at timdeegan2015@gmail.com.)