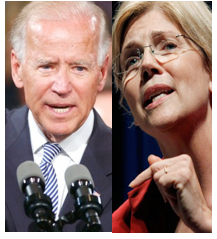 POLITICS-Many thoughtful progressives in the Democratic Party, myself included, are suffering from a feeling of helplessness these days. We believe the Party is headed for defeat under the banner of Hillary, whose poll numbers are already not looking good. We fear disaster but have not seen a better alternative.

While the Democrats should have something of a lock on the Presidency, given the nation's demographics, a campaign by Hillary will not be anything like a normal campaign. Instead of a campaign on issues and party credibility, it will be a campaign about Hillary. Hillary might very well lose that campaign.

There is probably little she can do to improve her poll numbers because voters views about her were set a long time ago. Voters may turn to Hillary if the Republican candidate is a conservative extremist, but they are unlikely to change their views of her on the basis of some new campaign proposal.

Her campaign will always be on the defensive, as we have seen in the latest controversy over the e-mail server.

We live in fear of the next revelation about her or Bill, suspecting that there is plenty out there to reveal.

Are we going to have to listen to her defending the flow of foreign money to the Foundation or the huge speaking fees coming from interested corporations?

No one wants a campaign organized around such issues, but this is what a Hillary campaign will look like.

In response to these fears, many progressives are turning to Bernie Sanders--a surprise even to himself. Sanders shows the deep desire for reform present in the Democratic base. But no one can seriously believe that Sanders can win the national election.

Well to the left of the mainstream of the party, he campaigned as an independent and described himself as a democratic socialist. Socialists have not been able to hold on to office in Scandinavia in recent years. The socialist recovery is not going to start in a country that still idolizes Ronald Reagan. Sanders is a great symbol, not a credible alternative.

O'Malley cannot break out even if Hillary falters because he carries too much of the weight of Baltimore. Webb is invisible. No wonder many progressives believe that the Democrats are throwing away the presidency, which would mean a Republican takeover of all of the branches of the national government and most of the states. Quite an achievement for a minority party.

This is the political situation that compels Joe Biden to run. He may not be a great candidate -- too old and too loquacious -- but he can win. Most important, he is well liked and even loved by many. His family is a source of support, while Hillary's is only a source of potential problems.

He is a traditional Democrat, meaning that he represents the center left, which is where the votes in the swing states are. He speaks to the working class in a way that neither Hillary nor Sanders can match. Tactically, he can run on the promise of finishing the work of the Obama/Biden administration.

There remains much to be done to secure universal health care, the economic recovery, reform of the criminal law and policing, as well as carbon reduction. Such a campaign positions him to profit greatly from Obama's support, which will be crucial for motivating minority groups upon which a Democratic victory must depend.

A ticket that included Elizabeth Warren would speak directly and convincingly to both.

Progressives wanted Warren, not Sanders, to run. She has been the standard bearer for this wing of the Party for several years now. For her to win the presidency, moreover, would represent a more fundamental feminist achievement than a win by Hillary, who after all came into national politics as the spouse of a President.

Warren, probably wisely, has renounced a run in 2016. Yet, a Biden campaign, cast as one of completing the work of this administration, would be understood -- implicitly or explicitly -- as leading to a four-year presidency. Biden will be deep into his 70s in four years, which is surely time to retire.

In short, running with Biden puts Warren in the prime position to run on her own in four years. This prospect should be far more satisfying to progressives and feminists than watching a spectacle of self-destruction in the coming electoral season if Clinton and Sanders remain our choices.

A Biden/Warren ticket speaks to all the elements of the Democratic coalition. It speaks to the future, while holding on a little longer to the promise of the present. It would save the Democrats from their own worst enemies: themselves.

(Paul W. Kahn  is Robert W. Winner Professor of Law and the Humanities, and Director of the Schell Center for International Human Rights at Yale Law School. This piece was posted earlier at Huff Post)