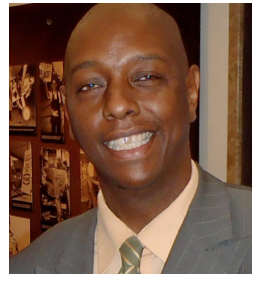 SKID ROW, DOWNTOWN LOS ANGELES- The positive results of a citywide election made it possible in 1999 for the Los Angeles City Charter to include the creation of the neighborhood council system. It was described as a vehicle which would act as a liaison between the public and the City’s elected officials and all other City agencies. (Photo: author General Jeff.)

The Neighborhood Council system’s governing document “Plan for a Citywide System of Neighborhood Councils” has “goals and objectives” which include (Page 1, in order); 1) The promotion of public participation, 2) The promotion and facilitation of communication, interaction and collaboration between all other NC’s, 3) The facilitation of City services and government responses, 4) To ensure equal opportunity, 5) To CREATE AN ENVIRONMENT IN WHICH ALL PEOPLE CAN ORGANIZE AND PROPOSE THEIR OWN CERTIFIED NC SO THAT THEY DEVELOP FROM THE GRASSROOTS OF THE COMMUNITY and 6) To foster a sense of community for all people.

The entire “Plan” document is 24 pages long. It is filled with details and specifics which clarify BEYOND DOUBT what a qualifying neighborhood looks like and also what the process is in order to establish an NC.

The Skid Row community does indeed qualify. Not with the primary criteria of having 20K residents, but with the secondary criteria of having two City-owned parks, a police station, a fire station and obviously by being a well-known area with a distinctive name and having an even more distinct characteristic- being “The homeless capitol of America”.

With constant and myriad  quality-of-life issues that have existed for decades, Skid Row is in dire need of significant City services and long-term solutions which apparently cannot be produced and/or developed within it’s current position of government connectedness. Presently, Skid Row is a part of the Downtown Los Angeles NC (DLANC) and has been there since DLANC’s inception in 2002.

Thirteen years later and while the rest of Downtown has improved significantly, even with international developers now investing and constructing multiple billion-dollar projects in every direction around it, Skid Row still remains the same.

With hundreds of homeless encampments on the public sidewalks, a constant stench of urine and feces due to a lack of public restrooms (of which the City of Los Angeles was cited for multiple violations by the LA County Health Department in 2012) and ever-changing “solutions” initiated by inept non-profit leadership, said “DTLA” development and Downtown’s overall condition can be described as “A donut full of glaze (shine) all around us in a circle (which represents the billion-dollar developments), with Skid Row being the empty donut hole in the middle”.

There is no question that Skid Row is in desperate need of repair. Some suggest that a Federal “state of emergency” needs to be declared. While the DLANC is doing an excellent job of supporting Downtown’s overall revitalization, Skid Row has been “left on the back burner”. This, then, paves the way for the creation of the Skid Row NC. While it was “too soon” to be created in 1999, the Skid Row NC already has an anticipation of great leadership and passionate community members, which is the basis for an active and engaged NC. (Photo right: Stakeholders meet to discuss Skid Row Neighborhood Council.) 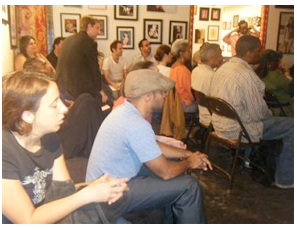 Why, then, are there “naysayers” to this obvious “no-brainer” of a solution?

Since last summer (when the Skid Row NC formation talk began), there have been influential people who represent communities that already have NC’s “leading” the “killjoy sessions”, mostly with concerns of how additional NC’s will negatively affect the City’s overall budget (read: their own NC’s budget). There are also representatives of the Department of Neighborhood Empowerment (DONE) who also point to the budget as a hindrance and motivating factor to voice their “concerns”.

However, all of this “naysayerism” (not a real word, but it seems appropriate) is in direct contrast to the previously explained “goals and objectives” of the citywide NC “Plan”. Then, to undermine the efforts of Skid Row residents who are TRYING to do something positive, suggests that there are people who would prefer that we remain in a helpless state of existence and continue the historical drunken stupor that has drained time, energy and resources from the City of Los Angeles and it’s citizens for decades.

There is a newfound positive energy in Skid Row these days which breeds hope to its residents. This should be embraced and supported. With the definition of all new SRO low-income affordable housing described as PERMANENT supportive housing, the residents are all but assured that we will not be going anywhere. Therefore, it’s time for change. It’s time to see Skid Row as a community. It’s time to support the resident’s efforts to create a viable neighborhood, even with its negative detractions. It’s time to support the creation of the Skid Row Neighborhood Council.

This is NOT about money, it is about survival.

If the $3.7 million-dollar budget that the City of LA allocated to its own “Operation Healthy Streets” to clean Skid Row hasn’t made a significant dent in the issues, how can the anticipated $30 thousand dollars given to the SRNC be a factor?

Human Beings have emotions and feelings. We strongly feel that the creation of the Skid Row NC is our best opportunity to positively change our community forever.

Who, then, wouldn’t want to support this?

(General Jeff is Chair of the Skid Row Neighborhood Council Formation Committee and an occasional contributor to CityWatch.)