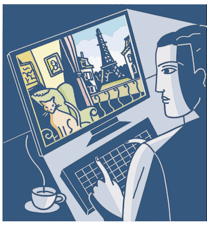 LABORVUE-Wall Street’s current darling of the so-called “sharing economy” is Airbnb. Armed with a feel-good message of “belonging” and a mom-and-pop image as a friendly means to make ends meet by renting a spare room to overnight tourists, the seven-year-old Silicon Valley startup has grown by leaps and bounds.

Its value now exceeds that of major hotel chains like Hyatt and InterContinental, and it is on track for an Initial Public Offering (IPO) in either 2015 or 2016 that could well exceed the company’s current $13 billion valuation.

Standing in its way is one giant hurdle: Airbnb’s profits come from an illegal activity.

Last year, in hopes of legalizing its largely unregulated business and heading off local government crackdowns, the company began proposing to give revenue to cities in desperate need of it. The pitches were typically presented as offering up a mea culpa — “Gee, sorry we haven’t been paying taxes, but we promise we will” — that has allowed elected officials to appear to be regulating them by imposing taxes while in fact giving the company exactly what it wants.

So far, the strategy has won Airbnb favorable policies in Portland and San Francisco, and they’ve avoided appearing as ethically unclean as Uber, the subject of controversies related to sexual assault and allegations of predatory business practices. Uber hasn’t exactly been helped by the profile of its CEO, Travis Kalanick, or his appreciation for Ayn Rand.

Rand is an appropriate hero, however, for both companies, who argue that people should be allowed to do as they wish with their homes and cars, and only an outmoded bureaucracy would stand in their way.

That sounds good until you look closer, as many are now doing with Airbnb.

Renting out an apartment to tourists is all well and good until it turns into a hotel with late night parties and traffic problems in a residential neighborhood. Or taxes and jobs are lost. It’s only a matter of time before a rather serious, Uber-esque assault occurs related to an Airbnb host property.

But what really makes Airbnb a problem is how little it has to do with sharing and how much it costs all of us, even those who live nowhere near an illegal hotel unit.

Airbnb, Rising Rent, and the Housing Crisis in Los Angeles, a new study released today by the Los Angeles Alliance for a New Economy (LAANE). finds that, far from its popular image, only a tiny sliver of Airbnb’s substantial L.A. revenue comes from someone renting out a spare bedroom.

Instead, Airbnb has created a market of over 11,000 units in the city, most of which has been taken off the residential housing market so landlords and leasing agencies can make more money from tourists. Nearly 90 percent of Airbnb’s revenue falls into that category, according to the report.

That’s a problem in a city recently called “the most unaffordable rental market in the nation,” and where rents have been rising 10 percent a year for quite some time.

As the report indicates, there is a strong correlation between Airbnb and rental rates. Rents have been rising twice as fast in Airbnb’s top 10 local neighborhoods — which account for 70 percent of Airbnb’s Los Angeles revenue — as they have citywide.

Whatever the tax benefit, the loss of 11,000 or more housing units is devastating to most regions. But another finding from the report makes regulating these illegal conversions all the more essential. Using Airbnb’s own numbers, the report estimates that over 80 percent of the tax revenue Airbnb claims to offer would have come to the city anyway, as those travelers would have stayed in hotels.

The company, in other words, has taken money that would have gone to hotels, not paid the taxes they would have paid, and is now offering up those taxes in exchange for legalizing the practice that allowed them to take all the money.

In a sense, Airbnb’s strategy (and Uber’s) is a smart one: make a ton of money doing something without legal authority, and then use the profits to lobby to get on the right side of the law. It fits with the Ayn Rand vision. It does not, however, fit in with Los Angeles’ needs.

(James Elmendorf is a Deputy Director  of LAANE, which he joined in 2003 as a senior policy analyst, focusing on new developments and specializing in the hospitality industry. This perspective was posted originally at capitalandmain.com).