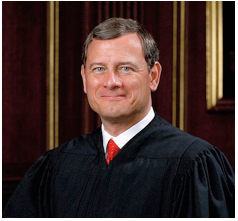 COURT WATCH-As the Supreme Court prepares to invalidate Obamacare’s federal tax subsidies in yet another assault on the social safety net, it’s a good time to review the promises Chief Justice John Roberts made at his September 2005 Senate confirmation hearing and re-examine the key questions he was never forced to answer.

Students of judicial history will recall that Roberts was initially nominated to take the place of retiring Justice Sandra Day O’Connor and was tapped for the chief’s position only after the death of former Chief Justice William Rehnquist. Suddenly thrust into the national spotlight, Roberts declared in his now famous opening statement to the judiciary committee that he was “humbled” by his nomination. In keeping with that humility, he pledged that he would “decide every case based on the record, according to the rule of law, without fear or favor, to the best of my ability. And I will remember that it’s my job to call balls and strikes and not to pitch or bat.”

Since that time, however, Roberts and his Republican brethren have acted more like Abner Doubleday redesigning the rules of the game, blazing a trail of conservative judicial activism unseen since the early 1930s. Among other decisions, the court under Roberts’ stewardship has recognized an individual right to bear arms under the Second Amendment; unleashed the power of corporations and the wealthy to spend limitless money on elections under the guise of free speech and the First Amendment; invoked the First Amendment rights of nonunion members to curb the right of public sector unions—the last bastion of organized labor in America—to collect dues and fees; and gutted the Voting Rights Act pursuant to a wholly novel interpretation of states’ rights under the 14th and 15th Amendments.

Although these decisions and many others have garnered much-warranted scrutiny from the mainstream media, Roberts has never been definitively linked to what many scholars consider the single worst and most activist high court ruling of the 21st century—the per curiam (unsigned) 5-4 judicial coup d’état delivered in Bush v. Gore, which halted a manual recount of the disputed Florida vote in the 2000 presidential election and handed victory to George W. Bush.

The reason for the lack of such linkage is simple: Roberts has never, at least publicly, been pressed to explain his involvement in the case. Astonishingly, during his lengthy four-day confirmation hearing in 2005 Roberts was asked only once—during an evening session on the third day by former Sen. Herb Kohl, D-Wis.—to comment on the case.

When Kohl inquired about Roberts’ views on the “propriety” of the Supreme Court’s opinion, Roberts replied evasively. “There are certain cases that don’t come along all that often that are, by their importance, significant enough for the court to take,” he said, conceding that the case didn’t fit the profile of those usually reviewed by the high court, in which an act of Congress is challenged or the federal circuit courts are divided over a significant legal issue.

Roberts also professed to have no clue as what specifically led the Supreme Court to take on the case, testifying that “the determination of whether to grant review in that case, again, that’s not something that—you don’t know on what basis the justices make a decision to grant review. You just get an order that says review is granted.”

When Kohl asked once more for Roberts’ personal “opinion” about the decision, the nominee demurred, claiming, “Well, that’s an area where I’ve not been—I’ve not felt free to comment whether or not I agree. …”

And then came what in retrospect proved to be a historical moment. Instead of pressing ahead and insisting on an answer, Kohl relented, saying only, “Well, it’s not likely to come up again.” At that point, Kohl shifted his inquiry to the failed 1987 Supreme Court nomination of ultraconservative federal appeals Judge Robert Bork, an early apostle of the constitutional theory of “originalism.” On Sept. 29, 2005, the full Senate confirmed Roberts as the 17th chief justice of the Supreme Court by a vote of 78 to 22.

Looking back, the issue lingers: If Kohl had remained resolute in his examination of Roberts and succeeded in extracting a responsive answer, what might he and the country have learned?

In the run-up to his Supreme Court confirmation hearing, Roberts’ role in the Florida recount controversy was the subject of a small handful of newspaper articles, in particular one published in July 2005 by The Miami Herald. According to Herald reporter Marc Caputo, Roberts was an integral part of the Republican legal team assembled to work on the Florida recount, operating as a “consultant, lawsuit editor and prep coach for arguments before the Supreme Court.”

Roberts was recruited to the team by none other than Ted Cruz, then a young and very conservative Harvard-educated lawyer who, like Roberts, had once worked as a clerk for Chief Justice Rehnquist. In 1999, Cruz hired on with the Bush election campaign as a domestic policy adviser.

By the time Caputo caught up with Cruz in 2005, Cruz had become the solicitor general in Texas, and had earned a reputation as a pugnacious litigator, arguing nine cases of his own before the Supreme Court.

Unlike other Republican operatives Caputo contacted for his article, who professed to recall virtually nothing about Roberts’ presence in Florida, Cruz said that Roberts spent “a week to 10 days” in the Sunshine State working on the mushrooming legal challenges surrounding the recount. After the election, Caputo reports, Roberts traveled from D.C. to Tallahassee to advise Gov. Jeb Bush on his options for certifying the outcome of the Florida vote—something that even conventional biographies of Roberts now acknowledge—and later participated in what Caputo terms “a dress rehearsal to prepare the Bush legal team for the U.S. Supreme Court.”

Although Caputo’s story never went viral, it wasn’t suppressed, either. It was available to Kohl and other members of the Senate Judiciary Committee at the time of Roberts’ confirmation.

Had any member of the committee found the courage to ask Roberts to respond to Caputo’s expose, Roberts would have had two basic and very uncomfortable choices: Either he could have declined to answer on grounds of attorney-client privilege (never an easy option for a lawyer advising a public official on official government business) or he could have fessed up the details of his role in Bush v. Gore.

Either way, the “neutral umpire” metaphor Roberts offered in his opening remarks to the judiciary committee would have been exposed as so much hackneyed prevarication. Invoking the shield of attorney-client privilege would have meant disclosing that he had served as counsel not only to the new president’s brother in Florida but to the president himself—the very man who was handing him the chief justice job—in litigation before the Supreme Court. Denying that he had acted as an attorney for either George or Jeb Bush, on the other hand, would have rendered the “advice” Roberts gave either man fair game for public disclosure and evaluation.

Whether Senate Democrats would have used such developments to filibuster the Roberts nomination will never be known and in any event is doubtful. Writing in July 2005, when Roberts was still slated to replace O’Connor, political commentator Tom Engelhardt observed in a column titled “A Thief on the Court?”:

“If the Democrats were an actual opposition party, if they were really a party at all, the Roberts nomination would be an open-and-shut case, no need to consider Roberts’ record on abortion or anything else. Why, after all, would a party that believed a presidential election had essentially been stolen from it by the Supreme Court in 2000 (and perhaps again in 2004 via voter suppression and other techniques in Ohio) agree even to consider the candidacy of a legal partisan who clearly had an unknown but all-too-real hand in taking the election from them, or do anything but demand the withdrawal of his nomination on the threat of a sustainable filibuster?”

Sadly, the Democrats showed cowardice instead of opposition, failing not only to mount a filibuster against Roberts but even to demand answers to vital questions about his record of extreme and sneaky behind-the-scenes partisanship. We’ve been paying a heavy price for that cowardice ever since.

(Bill Blum is a former administrative law judge and death penalty defense attorney. He is the author of three legal thrillers published by Penguin/Putnam and a contributing writer for California Lawyer Magazine. His non-fiction work has appeared in a wide variety of publications, ranging from The Nation and The Progressive to the Los Angeles Times, the LA Weekly and Los Angeles Magazine. This piece was posted first at Truthdig.com … home to other important writers: Robert Scheer, Amy Goodman, Bill Boyarsky.)