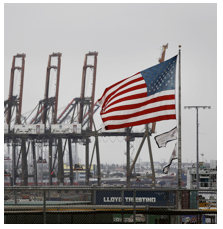 AT LENGTH-The American flag barely flaps in the breeze, when the sun risesbehind the Vincent Thomas Bridge, as seen from Eastview Little League baseball fields atop TraPac’s new automated OCR cranes at berths 134-139 can be seen idle with little movement on the docks from that vantage point.

TraPac recently has  installed and begun testing the new cranes which utilizes a complete optical character recognition (OCR) solution for every entry and exit point of their terminal. The technology would make the terminal fully automated.

A source told me that the automated cranes there hasn’t been operating for the past two weeks following a health and safety grievance filing by the ILWU. The union claimed that TraPac’s new technology is dangerous following a dozen accidents on that terminal since the automated part of the facility was finished.

The new automated cranes even showed problems on its inaugural launch, with all the executives on site. An accident was avoided only by the quick use of the override switch by a union crane driver.

New technology seems to be the buzzword these days around the harbor with various entities both private and public heralding the economic and environmental benefits of “hi-tech” advances. Even the new Executive Director of the Port of Los Angeles Gene Seroka waxed on about how new technologies had reduced air pollution by some 45 percent throughout the past decade, at the San Pedro Chamber leadership breakfast.

Yet, it was the previous POLA Executive Director Geraldine Knatz who signed off on the $150 million to $210 million (there seems to be some disagreement as to exactly how much) TraPac’s transition to fully automate the terminal. It is generally understood that her arrogance for not getting mayoral or city council approval was the cause for her “resignation” this ast year.

Whatever the actual amount was,  it left a hole in the current POLA budget that has caused the Board of Harbor Commissioners and Mayor Eric Garcetti to do some deep soul searching on future expenses and the direction this port takes in remaining competitive in the global trade.

The problem is that this TraPac deficit or investment, depending on how you look at it, has caused the Harbor Commission to postpone and delay other long-promised waterfront developments. The trouble with this “hi-tech” solution and its “hi-cost” expense is that it currently can’t prove itself to be safe at any speed, cost millions to install and will cost good paying jobs on the waterfront.  It is unclear how many years it will take the port to recoup the investment. More importantly, should the port be investing in this yet to be proven safe technology that will contribute to more job losses than it creates?

This one terminal has now become a focal point of the entire West Coast contract negotiations between the ILWU and the Pacific Maritime Association and as of this past week, I have been told the TraPac board is split on whether to settle the dispute or call for a lockout of the ILWU.

This, of course, could have far reaching impact on all concerned. A lockout could trigger a complete collapse of the West Coast contract talks, cause a stoppage of all cargo in every port from Vancouver, B.C. to San Diego and could cause far reaching economic impacts from here to Chicago.

This, I predict, would call for immediate presidential intervention and I’m not so sure how the PMA would fare with a Barack Obama-appointed arbitrator settling the dispute.

This may end up as being one of those historic moments, though, when everything changes, like the year longshoring changed to containerization.  And I am not convinced that the majority of ILWU workers understand what’s at stake.

These new technologies will replace as many as 25 percent of the current jobs and the jobs that remain or the new jobs created will mostly take a higher skill set than what most of these workers are trained in.  Our schools and universities are not even ramped up to teach to this level yet. The question is whether any new jobs created by automation will in fact remain here or even be under the jurisdiction of the ILWU?

I would bet that this last question is the crux of the long drawn-out contract negotiations that hangs over the ILWU and PMA jointly.  How many jobs remain and who represents the new jobs that are created?  It doesn’t take much to imagine a sci-fi future in which our aspiration for automation has progressed so far that the PMA wants to replace all workers with androids and that the entire port operates on a 24-hour schedule with no holidays, no overtime and no grumbling from the robots.

This, of course, works up to the point where artificial intelligence develops, the robots begin to think and the last human on the waterfront, an old ILWU worker says to them, “an injury to one is an injury to all.” And then, the robots stop working and there is no one left who knows how to either work the docks or reprogram the androids.

Don’t get me wrong, there will always be advances in technology, but the core ethical question is, at what point do we give up the human factor in any work and replace it with a machine? And, should public monies be used in this process to become more competitive at the expense of eliminating human jobs?

(James Preston Allen is the Publisher of Random Lengths News, the Los Angeles Harbor Area's only independent newspaper. He is also a guest columnist for the California Courts Monitor and is the author of "Silence Is Not Democracy- Don't listen to that man with the white cap on he might say something that you agree with!" He was elected to the presidency of the Central San Pedro Neighborhood Council in 2014 and been engaged in the civic affairs of CD 15 for more than 35 years. More of Allen … and other views and news at: randomlengthsnews.com where this column was first posted.)