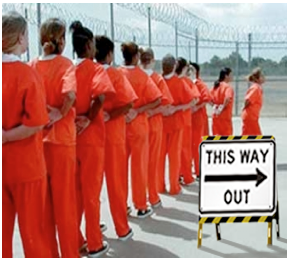 CAL WATCHDOG-Spurred by a series of court decisions ruling the state’s prison crowding unconstitutional, Gov. Jerry Brown’s ongoing “realignment” effort sought to make adequate room for the state’s worst convicts by diverting lesser criminals to county jails. There, however, the changes have caused a snowball effect.

A recent Los Angeles Times investigation has shown that newly encumbered counties turned to early release to lighten their own load — sending serious offenders back out on the streets with only a fraction of time served.

Analyzing jail data, the Times discovered that “incarceration in some counties has been curtailed or virtually eliminated for a variety of misdemeanors, including parole violations, domestic violence, child abuse, drug use and driving under the influence.”

In Los Angeles County, where one in four jailed Californians are found, 10 percent of time served was “often” enough to release male inmates back into society, compared to just 5 percent for female inmates.

With a prison system as complex and bureaucratic as California’s, the perils of early release have proven to be just the tip of the iceberg of unintended consequences. In recent months, for instance, even parole violators have wound up in county, not state, jails. Los Angeles County has had to add 500 staffers to cope with the new flood of probationers, while Riverside County alone has added over 140.

The cumulative effect has been a so-called “revolving door” in the jail system, with the line blurring between the incarcerated and the law-abiding public. Dangerous inmates have left jail prematurely, only to return on fresh charges; even parolees who didn’t revisit jail on parole violations have remained part of the administrative system, which has incorporated automated kiosks to help supervise released cons.

According to the Times investigation, the sheer numbers of Californians involved have raised profound doubts about how long the current improvised system can go on. In 2011, California averaged 9,700 released inmates per month. Now, that number has reached 13,500 a month, with more than 17,400 hitting the streets in October alone.

State and county officials said it’s an open secret that legislators knew about realignment’s consequences. That made it easy for localities to hit up Sacramento for a quick infusion of substantial funds – $850 million last fiscal year and over $1 billion this time around, according to state corrections department spokesman Luis Patino.

The flood of money following the flood of inmates has created incentives for an even larger state-funded prison system. Although realignment has reduced the state prison population, it has kickstarted a process where California pays for a county-level system that grows to compensate.

Some $80 million in state dollars were recently awarded to Stanislaus County for a big new jail expansion — the first project drawing from Phase II of the $1.2 billion allocated by Assembly Bill 900, the Public Safety and Offender Rehabilitation Services Act of 2007.

Although an additional $44 million has flowed to a “re-entry facility” meant to help inmates with less than a year left in their sentence return to society, even left-leaning criminal justice critics have objected to the heavy costs associated with realignment. Vonya Quarles, an organizer with the All of Us or None organization, told the Modesto Bee that the Stanislaus project “is good for jobs and the builders, but the outcome of jail expansion has been nothing but failure,” underscoring the over $50,000 cost to keep an inmate in county jail for a year.

In an effort to quantify the impact on crime caused by realignment, the Sentencing Project recently released the results of an investigation covering the 2006-2012 period. The study claimed that violent crime decreased by 21 percent, even while the prison population fell by 23 percent.

While proponents of realignment may be relieved to see such statistics, critics would likely point out that the six-year span of the study does not include the current spike in violent offenders released early.

Begging the question: How worried should we be?

(James Poulos writes for CalWatchdog where this column was first posted.)