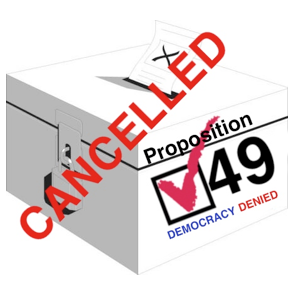 CALIFORNIA POLITICS-Many Angelinos and Californians had not heard of Prop 49, Money Out Voters In, The Overturn Citizens United Act by the time it was thrown off the November ballot last week by the California Supreme Court.

Prop 49 would have called upon the US Congress to draft and pass and the California legislature to ratify an amendment(s) to the US Constitution to overturn the widely reviled Citizens United ruling and related rulings to allow for the regulation of money in our political processes and to assert that constitutional rights are for p eople, not artificial entities.  It’s verysimilar to Prop C which Angelinos passed last May.

Writing in dissent of the majority’s precipitous action, Chief Justice Tani Cantil-Sakauye saw no “clear showing … warranting this court taking the extraordinary step of removing the measure from the ballot, thereby disenfranchising the voters.”

The Los Angeles Times, however, while admitting that they were “not fans” of the Citizens United ruling, applauded the Court’s majority and published two op-eds in support of slashing Prop 49 from the ballot and one piece that asked “Why shouldn’t California voters get to weigh in on Citizens United,” a tepid endorsement of Prop 49’s legitimacy at best.

As the chair of the Yes On Prop 49 Committee, I submitted an op-ed in response to the LA Times’ position and was informed yesterday (Aug 20th) that the LA Times would not be printing my response.

I am not impressed that the LA Times editorial board chose not to print the response to Prop 49’s removal from the people responsible for putting Prop 49 on the ballot.  (MOVI, Money Out Voters In, were the sponsors of the California Legislature’s bill that became Prop 49.)

The LA Times can do whatever they like, of course, but it shouldn’t be confused with journalism and the earnest commitment to inform the people of Los Angeles, and the LAT’s broader audience, about the issues of the day.

What follows is the op-ed the Los Angeles Times refused to print.

The Yes on Prop 49 Committee was pleased to learn that the Los Angeles Times are “not fans” of the Supreme Court’s Citizens United ruling.  In this, the LA Times Editorial Board is in agreement with an estimated 80% of Americans. (LA’s 2013 Prop C passed with a resounding 77% of the vote.)  So, if we’re in agreement that Citizens United was wrongly decided, what are our options to set things right?

Proposition 49 is California voters’ opportunity to act using the method the Framers used themselves and guaranteed for future generations ensuring that no law would be made “… abridging… the right of the people…to petition the government for redress of grievances.”

California’s voter instruction history predates our establishment of the initiative process (1911) because petitioning our government is a constitutionally protected right and prerogative.   In 1892, for example, California successfully used it to call for the direct election of senators, eventually leading to the 17th Amendment.

For the California Supreme Court to preemptively deny Californians this constitutionally guaranteed right is a miscarriage of justice and reflects a misunderstanding of both our federal and state constitutions.

It is the custom of the CA Supreme Court, as was the case with Prop 8, where there is a question regarding the constitutionality of a ballot measure, not to interfere with the election, but to consider the constitutional question after the people have voted.  This was the course the CA Chief Justice recommended.

Many, we included, believe that establishment titans in business, media and government don’t want Americans to have a conversation about their power and influence because they already know Americans agree that the merest few have much too much.

The Howard Jarvis Taxpayers Association who filed the suit, former Governor Pete Wilson who filed an amicus letter, and the powerful interests they represent, couldn’t risk California’s conversation as they understand that a conversation in California is likely to spread.

Our grievance is grave and it’s growing.  We have a big problem in America with the corruption of our government.  Americans agree about this, too.  The SCOTUS is exacerbating the problem and we have very limited means to stop them.

This is precisely why a voter instruction measure like Proposition 49 is necessary.  With the passage of Proposition 49 the people of California would instruct our representatives to prioritize the drafting, passing and ratifying of an amendment(s) so that the two counterintuitive, fundamentally flawed concepts that have insinuated themselves into the High Court’s understanding of the US Constitution, namely that money is the equivalent of free speech and corporations are people and entitled to constitution rights, may both be forever stricken from consideration in the legal lexicon.

We are outraged that the CA Supreme Court has attempted to silence the people of California.  Protestations of a “bloated” or “cluttered” ballot are offensive and insult the voters who had no problem discerning the meaning of LA’s Prop C last year, nor have voters had conceptual problems with any of the Overturn Citizens United measures anywhere in the country.

We are especially disappointed in Justice Goodwin Liu, who derisively suggested that if the Legislature is interested in the public’s opinion on this matter they should commission a “Gallup poll.”

As one CA legislator wrote to us, Justice Liu “missed the point.”  It is not a poll the Legislature seeks.  “Instead,” the legislator continued, “it is a tool to put pressure on the Congress because Citizens United is affecting our ability to legislate.”

Indeed.  The Voter Instruction measure is one of the few tools that remains in the dwindling toolbox We the People have to impact the policies that determine our lives.

The only appropriate course for the California Supreme Court is to affirm the constitutionally protected right of the people to speak directly to our elected representatives and return the duly enacted Overturn Citizens United Act to the California ballot.