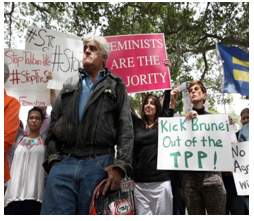 VIEW FROM HERE-The Beverly Hills Hotel, owned by the sultan of Brunei, is a ghost town.

The sultan recently imposed Sharia law on the citizens of this small country in Southeast Asia with a population of less than 500,000. The law includes the punishment of death for any who engages in the “crime” of homosexuality or adultery. Jay Leno, one of the celebrities attending a rally in front of the hotel, said: “It's people being stoned to death. Hello!”

Meanwhile, Bill Maher, another member of the almost-all-Hollywood left, discussed the kidnapping of mostly Christian Nigerian schoolgirls by a radical Muslim group. But, Maher added, “There’s no mention here of connecting this to the religion, which is always what I am seeking to do because I think that’s the elephant in the room.” Maher, unlike the Hollywood lefties protesting the hotel, insists Islam itself, not merely Sharia, is the issue.

Ayaan Hirsi Ali is a Somali-born critic of Islam. She, too, argues that Islam itself mandates a second-class status for women. She restricts her objection not to Sharia law, but also Islam itself. She thinks reform may be possible, but receives death threats and is the subject of a Fatwa -- a religious decree that, in her case, commands that she be killed.

Brandeis had no problem bestowing an honorary degree on playwright Tony Kushner, who admits he has “a problem with the idea of a Jewish state.” And Archbishop Desmond Tutu spoke at Brandeis despite having characterized Israel as an “apartheid state.” Brandeis’ tolerance of a variety of opinion, apparently, doesn’t apply to those critical of Islam.

Robert Spencer, author of "Onward Muslim soldiers," ought not wait for an invitation to speak at Brandeis. He, too, argues that Islam itself is the issue: “There are millions of peaceful Muslims … but the fact is that radical Muslims are using core texts of Islam that are deeply rooted in Islamic theology, tradition, history and law to justify their actions, and those radical Muslims are able to recruit and motivate terrorists around the world by appealing to these core Islamic texts. … As far as the radical, violent elements of the religion go, they are very deeply rooted and we are naïve in the extreme if we don’t recognize that and try to get moderate Muslims to acknowledge it so that real reform can take place. …

“When people say that jihad is a peaceful struggle -- it means ‘struggle,’ literally -- it means to bring the soul into line with the teachings of the Koran and the will of the law, that’s true. But it’s not the only meaning of jihad or even the principal meaning. Throughout Islamic history, and Islamic theology and law, you have violent jihad being the primary understanding of what it means -- this collective responsibility of the Islamic community to wage war against non-Muslims until they either convert or submit as second-class citizens under Islamic rule.”

Hollywood’s reluctance to raise the question about Islam’s treatment of women is also about money, or more specifically the use of Arab oil money to help finance movies. Matt Damon’s anti-fracking movie, “Promised Land,” was financed by Image Nation Abu Dhabi, a subsidiary of Abu Dhabi Media, the state media company owned by the United Arab Emirates.

But there's an even bigger reason why Hollywood refuses to address whether Islam itself needs reform -- President George W. Bush.

In making the case for the invasion of  Iraq, Bush said, “It is presumptuous and insulting to suggest that a whole region of the world -- or the one-fifth of humanity that is Muslim -- is somehow untouched by the most basic aspirations of life. Human cultures can be vastly different. Yet the human heart desires the same good things, everywhere on Earth.”

Bush viewed Muslim and Arab women's apparent acceptance of their second-class citizenship as akin to the Stockholm syndrome, rather than a matter of free choice. Bush hoped that a “free and peaceful" Iraq would provide a "dramatic and inspiring example" to the Middle East and the Muslim world.

Hollywood scoffed at his “cultural elitism” and his embrace of Western values of social, political, economic and religious freedom and equality of human rights.

But how long can Hollywood ignore the injustice Brandeis displayed toward the brave Ayaan Hirsi Ali?

How long can the Hollywood left avoid the broader and more profound issue of the suppression and subjugation of Muslim and Arab women? The moral relativists of Hollywood may have to make a moral judgment about culture and values.