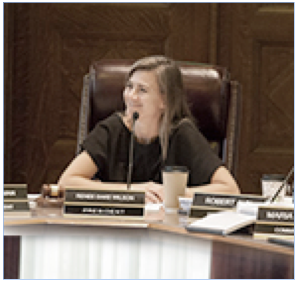 VOICES-Every day, the neighborhood councils ask for lead time so that they can weigh in on issues in their community and their city.

When I attended a CPC (City Planning Commission) meeting to testify on an item that West LA NC took a position on, I arrived after 50 minutes on the freeway only to hear our City Council Deputy request a continuance … asking for more time for the community to weigh in.

The issue had been heard three times in PLUM (Planning and Land Use) meetings and twice in the board meetings.

There were a few speaker cards to be heard, but the Planning Commission President (photo) decided that she would NOT hear any speakers, and continued the item for two weeks.

I asked to speak to her.

As I waited for her to finish a conversation with another commissioner, I then saw her head to the snack table and begin to eat. I asked the staffer to remind her I was waiting.

She finally appeared. She first told me the law was that she could not hear the speakers. I told her that was false.

She then stated that she would not open public comment because the item was not open. I tried to talk to her about the fact that people spend almost an hour to attend, only to have the hearing postponed and no voices heard.

She finally told me very bluntly, I will not open for speaker cards … even if I can! … on items postponed.

This is why the people in Los Angeles stopped voting.

The voters do not believe their voices are ever heard. When a commission is empanelled to HEAR cases, courtesy to the public should be shown and the speakers should be heard.

The commission president has set a high bar on arrogance and insensitivity.

An apology from the LA Planning Commission is in order.