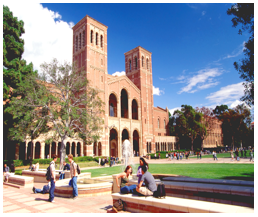 GUEST WORDS-In 1996 California voters passed Proposition 209, which prohibited discrimination or preferential treatment based on race, ethnicity or sex in admissions to public college and universities. But the moment 209 passed, UCLA, according to a new book, set about figuring ways around it.

“Cheating: An Insider’s Report on the Use of Race in Admissions at UCLA,” by Professor Tim Groseclose, describes what the author insists are illegal admissions practices that he witnessed at UCLA.

Groseclose’s story begins in 2008 when, as a member of a faculty oversight committee for admissions, he asked for a random set of application files. He suspected that UCLA was using racial preferences in its admissions decisions -- in violation of Prop 209. When UCLA refused to give him the files, he grew even more suspicious. In response, he resigned from the committee and alerted the press.

To divert attention away from his resignation, he says, UCLA formed the equivalent of a blue-ribbon commission. Specifically, it commissioned one of its sociology professors, whom it called an “independent researcher,” to study UCLA admissions and to examine Groseclose’s allegations about racial preferences.

Although the study was supposed to be completed in a year, UCLA did not release it until four years later. The statistical tests that the researcher conducted showed significant evidence of racial preferences. However, says Groseclose, UCLA wrote a press release claiming the opposite.

In addition to summarizing that report, Groseclose analyzes a data set that he obtained from UCLA via California’s Public Records Act. That data set, which he has posted online and is accessible to the public, contains evidence that is even more damning to UCLA.

But perhaps more interesting than the data and statistical analyses is Groseclose’s documentation of the suspicious ways that UCLA faculty and senior officials reacted when he asked for the data. They seemed to know that UCLA was breaking the law, and they resorted to desperate measures to prevent Groseclose and others from seeing the proof.

Once Groseclose began to press them, he says, their responses became more and more fanciful. For instance, they claimed that “privacy” was the reason they couldn’t give him the data. But then Groseclose suggested that they redact all names and personal identifiers from the applications. They still refused. Further, if they were so concerned with privacy, why did they give the data to the “independent researcher”?

While Groseclose’s disturbing revelations about UCLA admissions are interesting, the main contribution of his book, I believe, is his insight into the minds of the professors and universityadministrators. As Groseclose discusses, they have an extremely intense desire for racial diversity. How intense? Groseclose says some even lie and break the law to achieve it. The lies, in their eyes, are “noble lies.” The law-breaking becomes, to them, an act of “civil disobedience.” But as Groseclose discusses, sometimes -- in order to cover up the original noble lie -- the professors and administrators have to tell more noble lies. When the lies become a habit, the result is a culture of corruption and dishonesty.

Groseclose’s book, I suggest, is one of the world’s best case studies of that culture.

My favorite parts of the book are the conversations that Groseclose reports from faculty meetings. He discusses one meeting in which the UCLA chancellor pressured Groseclose’s committee into adopting a “holistic” admissions system.

The reason, the chancellor admitted, was because “several constituencies of UCLA are distressed and upset about the very low numbers of African-American freshmen.” At another meeting, two leftwing professors insisted that the university’s “independent study” should not examine data from a particular year. Why? They admitted that in that specific year, UCLA was probably the most guilty of violating the law.

Henry Kissinger is often credited with saying, “Academic politics are so vicious precisely because the stakes are so low.” Indeed, if you’d told me before I read the book that it contained transcripts of faculty meetings, I would have replied, “I think I’d rather watch paint dry.” The conversations are, however, both fascinating and troubling. They give special insight about how leftwing professors and university administrators think. If those conversations are representative -- and I believe they are -- then they reveal some major problems that our country faces.

I was honored to write the opening foreword for his book, and to have his first official interview upon its release.

Martin Luther King yearned for a color-blind society. Many of the left, however, want a color-coordinated one -- provided they are in charge of the coordinating. When asked whether he supported race-based preferential treatment for blacks, John F. Kennedy said: “I do think that we ought to make an effort to give a fair chance to everyone who is qualified … We are too mixed, this society of ours, to begin to divide ourselves on the basis of race or color."

“Cheating,” Groseclose’s new book written from his perspective as a UCLA insider, is an important voice in this debate on race-based preferences.