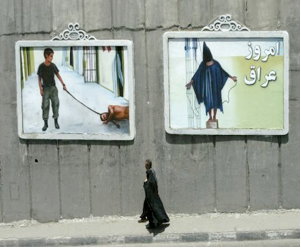 WHO WE ARE-Ten years ago, photos of the crucifixion — and worse — were released to the American public. The media still call it “the Abu Ghraib scandal,” as though, oops, the awkward repercussions for Team Bush were the torture photos’ primary horror.

No one talks about “the Auschwitz scandal.” The depth of our moral wrong has yet to be plumbed.

Ten years later . . . the hooded man with arms outstretched, electrodes attached to his fingers, revisits the national conscience. Iraq is in a shambles. The prison itself was closed in mid-April because Sunni insurgents are too much of a threat in the region. We wrecked and contaminated two countries in reckless pursuit of revenge and national interest.

Ten years later, a 6,300-page Senate Intelligence Committee report on the U.S. detention and “enhanced interrogation” program is due to be released, or partially released, at some point in the near future — pending declassification, i.e., censorship, of its findings by the White House and even the CIA itself.

McClatchy DC, to which portions of the still-secret report were leaked, recently reported: “The investigation determined that the program produced very little intelligence of value and that the CIA misled the Bush White House, the Congress and the public about the effectiveness of the interrogation techniques, committee members have said.”

In other words, the pain and degradation we inflicted on detainees — including waterboarding, sleep deprivation, extreme stress positions, wall-slamming and so much more (“working the dark side,” as Dick Cheney infamously put it) — yielded little or no information we were actually able to use. We tortured, we strip-mined, these men and women for nothing.

While I can appreciate the irony and outrage of all this, I cringe at its superficiality. Torture’s OK if it gets good stuff, like in the movies? The ends actually do justify the means, and the only “scandal” here is the inadequacy of the end results our torture program coughed up?

Here’s the thing. We have no innocence in this matter. We are a nation founded on the premise that the ends justify the means. Ten years after the glaring inhumanity of the “enhanced interrogation” program went public with the release of some ghastly photos, we haven’t as a nation acknowledged the depth of their revelations. We’ve been working the dark side all along.

A decade ago, an organization called Historians Against the War released a publication, “Torture, American Style,” which addressed all this. Scapegoating and dehumanization have always been tools of the trade of statecraft. The Abu Ghraib photos do not represent a departure from the past. In them, technology finally catches up with our own eternally classified secret self and reveals it in stark relief.

There’s no escaping it.

Margaret Power, in her introduction to “Torture, American Style,” outlines the cruelty zones the publication examines. The list is by no means exhaustive, she points out. It includes the following:

A. The U.S. prison system. “The physical, mental, and sexual abuse glimpsed at Abu Ghraib is part of the daily experience for two million people caged in American prisons,” she writes. For example, here in Chicago, where I live, a police commander was convicted in 1991 of presiding over the torture of several hundred criminal suspects.

B. Vietnam. During that disastrous war, the U.S. government “imprisoned those Vietnamese it considered ‘the enemy’ in tiger cages, subjected them to physical abuses, deprived them of food and water, and, as if all that was not bad enough, poured lye on them to burn and scar them,” Power writes.

C. Latin America. Our involvement in our “backyard” over the decades has included collusion with and training of torturers in both military and police forces in many of the countries south of our border. The notorious School of the Americas has long stood as a symbol of such involvement.

D. Slavery. Remember that? It was a way of life in the United States for a long time, and even after it ended, the dehumanization and repression of African-Americans continued. Lynchings were so common in the South they inspired a song, “Strange Fruit,” which Billie Holiday turned into a soul-haunting hit.

There’s a lot more darkness in the American past than this, of course, but it’s enough for now. Ten years, ten years. I think again of the man in the black hood, covered with a black blanket, standing precariously on a box with his arms outstretched in terrifying imitation of a crucifixion. The man’s pain is palpable. This is our enemy.

“Some believe that those who torture do so simply to extract information from the captured enemy,” Power wrote. “This is not entirely true, as the examples of Abu Ghraib, the tiger cages in Vietnam, and the treatment of slaves and prisoners in this country show so clearly. Torture is used to degrade, humiliate, and destroy both the individual who is being abused and members of his or her community who care about and feel connected to the victim of torture. It is a weapon used by those in power to maintain themselves in power.”

Ten years ago, we finally had a clear look at ourselves. That’s the beginning of salvation.

(Robert Koehler is an award-winning, Chicago-based journalist and nationally syndicated writer. His new book, Courage Grows Strong at the Wound is now available. This piece was posted first at CommonDreams.org).