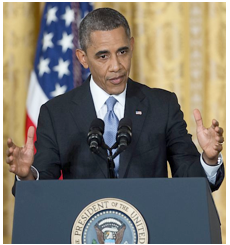 GUEST WORDS-A quick way to kill debate is to accuse your political adversary of “lying.”

Still, it’s hard to figure out what else propels President Barack Obama to falsely assert, yet again, that employers rip off female employees by paying them 23 cents less per dollar than men -- for doing the same work.

In his last State of the Union address, Obama said: “Today, women make up about half our workforce. But they still make 77 cents for every dollar a man earns. That is wrong, and in 2014, it’s an embarrassment. A woman deserves equal pay for equal work. She deserves to have a baby without sacrificing her job.” See, the president begins the statement with a fact. That is, women on the whole make 77 cents on the dollar compared to the earnings of men, on the whole. But here, as he has other times, Obama has added for the same work, or, as in this case, “equal pay for equal work.”

This makes the statement not only flat out false, but insultingly so.

MSNBC’s “Morning Joe” co-host, Mika Brzezinski, echoed Obama: “Of course, women get paid 77 cents for every dollar men earn for the same exact job, so it's something that needs to be rectified, obviously.” (Now according to the Daily Beast, at $2 million, Mika makes half of what Scarborough makes. Time to hire a new agent perhaps, but it does not excuse falsely telling woman that they face a 23-cent ovary discount.)

Even the federal government -- that Obama serves as chief executive -- knows this is nonsense.

In 2009, the U.S. Department of Labor found that, after controlling for obvious education and job differences, the gender “wage gap” shrank to only 95 percent.

Even the 5 percent “gap” has a non-exploited explanation. The Labor report said:

“Research also suggests that differences not incorporated into the model due to data limitations may account for part of the remaining gap. …[M]uch of the literature, including the Bureau of Labor Statistics Highlights of Women’s Earnings, focus on wages rather than total compensation. Research indicates that women may value non-wage benefits more than men do, and as a result prefer to take a greater portion of their compensation in the form of health insurance and other fringe benefits.”

What’s more, three years ago USA Today found that young, childless, unmarried working women ages 22-30 out-earn men of the same age: “Women ages 22 to 30 with no husband and no kids earn a median $27,000 a year, 8 percent more than comparable men in the top 366 metropolitan areas, according to 2008 U.S. Census Bureau data … ”

“The trend is especially apparent,” said USA Today, “in cities where minority groups make up more than half the population. Among blacks and Hispanics, women are more than twice as likely as men to earn college degrees.” They found the largest discrepancy in Atlanta, Ga., where woman out-earned men by 21 percent.

Again, why does Obama keep pushing this blatant untruth? Four possibilities: stupidity, ignorance, agenda/motive or he chooses to believe it.

Possibility number one: Say what you want about Obama, stupid he's not.

Possibility number two: Obama lacks access to and understanding of the information? The president of United States does not want for research, data, information, you name it -- he and someday she, has plenty of information.

Possibility number three: The falsehood advances Obama’s agenda of combating “inequality” while attacking the GOP for its “war on women.” This helps to maintain the so-called voter "gender gap” with single female voters. Even Obama’s Labor Department noted on the first page of their 93-page report, “The [77-cent] wage gap continues to be used in misleading ways to advance public policy agendas without fully explaining the reasons behind the gap.” Again, first page.

Possibility number four: Leftists, like Obama, make a conscious decision to ignore the evidence and choose an outcome consistent with their beliefs.

This is the kind of “cherry-picking” they once accused the anti-science, anti-intellectual George W. Bush of doing, to make a case for the Iraq War. Some people, goes the saying, believe what they see, and others see what they believe.

In Obama’s case, we are left with possibilities three and four. One is Machiavellian. The other is a willful disregard of truth. Both are offensive and harmful to the nation.