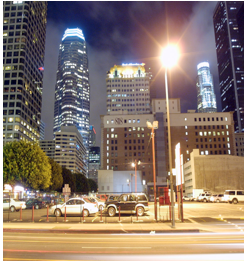 These problems include: a public school system with a high inner-city drop-out rate, where many of those who do graduate are unable to read, write and compute at grade level; the worst traffic in the nation; nearly $30 billion in unfunded pension liabilities (more than Detroit); last in job creation among big cities since 1992 and the only one of the seven largest cities "where the number jobs has actually declined since 1990"; and according the a recent study by the liberal Brookings Institution, now last in job creation for young people in the 100 largest metropolitan areas.

How has the city council busied itself even as Occidental Petroleum of LA became the latest of the top 10 oil companies once headquartered in California to leave? In the last few years, city council has: voted, with one dissenting vote, to require porn actors to wear condoms; voted, 11-1, to become the largest city in America to ban the use of plastic grocery bags; unanimously agreed to treat e-cigarettes like regular ones and restrict their sale and use; and voted unanimously for a resolution supporting a state bill to allow "undocumented immigrants" to get drivers' licenses. Council even passed a resolution, 13-2, condemning "intolerable" speech on talk radio. The resolution, according to one councilman, is not anti-First Amendment. "It's exactly appropriate for this council to speak up," he said, "against the vile things we hear on the airwaves."

The next report will make recommendations. Why wait? The city should immediately hire Peter Ueberroth. This California businessman successfully put on the 1984 LA Olympics when experts predicted disaster. Call him consultant. Call him City Czar. He has the stature, experience and the gravitas to implement the following 10 steps:

1) LA's recently elected mayor demanded that the heads of all city departments re-apply for their jobs. Similarly, 14 of the 15 current council members should immediately resign and re-apply for theirs. Ueberroth will ask each, "What would you do to turn the city around?" When he hears the words "spend more" or "invest more," it's over. Ueberroth will choose a replacement from a slate of civic leaders and residents to fill the unexpired term. One, a popular, commonsense ex-police chief who happens to be black, can stay. He provides political cover and street cred to those who will inevitably whine about "hired guns" taking over.

2) Bankruptcy. City workers and retirees will negotiate givebacks or the city will file for bankruptcy.

4) Vouchers. Allow the education money to follow the child, rather than the other way around. For people living in the inner city, they will have greater latitude to opt out of a government school.

5) Privatization. Contract out anything found in the Yellow Pages that is also being performed by city workers. Nearly 40 percent of the world's largest 100 airports are either fully or partially owned by investors. Los Angeles' airport, the world's sixth busiest, should be one of them. Because of its inefficiencies and higher-than-the-private-sector payroll, Business Insider ranked L.A.'s Department of Water And Power No. 13 of the "The 19 Most Hated Companies in America." Almost 20 years ago the libertarian LA-based Reason Foundation gave then-Mayor Richard Riordan a report on why and how to privatize the Department of Water and Power. Dust it off.

7) Traffic. Establish toll roads for LA's notoriously congested freeways. People would pay based upon density of usage at any given the time of day. End the strangling regulations on taxis that protect established cab companies from competition from lower-cost "gypsy cabs."

8) Adjust lawmaker pay. LA City Council is the highest-paid city council in the country -- all while governing over a city in "crisis."

9) Term limits. LA has had them for decades. They simply give us more contested races. We end up spending more time and energy getting more people elected -- and defeated -- than before.

Meanwhile government continues to grow beyond inflation and population growth.

10) City charter reform. Give the mayor direct responsibility for schools, as in New York and Chicago. It isn't that the schools necessarily are better, but parents at least have a named individual whom they can hold accountable.

Now then, let's get started.