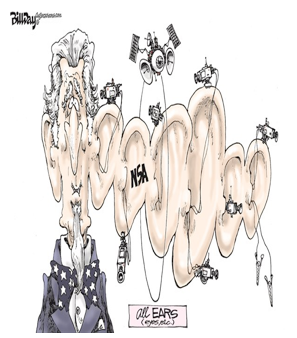 FROM THE HART-The confused debate, such as it is, over the struggle between privacy and security in the era of Snowden reveals again even greater confusion over our attitudes about government. The conservative anti-government party seems more comfortable (or perhaps less uncomfortable) with intelligence agencies listening to their phone calls than the progressive pro-government party which deplores government surveillance.

Put another way, conservatives seem more willing to sacrifice privacy for security than progressives. But this was true in other ways during the Cold War and War on Terrorism eras. Those outraged by government spending did not believe that expensive weapons systems, however questionable, involved government spending. And conservatives came to strongly support entitlement programs from which they benefitted. Though unspoken, the government spending to which they were opposed were by and large public assistance to the poor and unemployed, a relative small portion of the federal budget compared to defense and entitlements.

But the principal conundrum involves defining the "government" which we either support or oppose. The government composed of a vast defense and intelligence network (and "intelligence" broadly defined is now costing more than $70 billion a year--including the controversial telephone monitoring system) receives little criticism, even for its massive surveillance of American citizens, from those who oppose big government. And those who support public assistance to the poor, elderly, and unemployed by and large oppose government intrusion into their lives.

A notable exception to these confused attitudes toward government is represented by many libertarians who have emerged in the age of Snowden to decry NSA intrusion in their lives. Unlike modern conservatives and liberals who support those government activities they like and oppose those government programs they oppose, libertarians usually demonstrate more intellectual integrity. Big government is bad whatever it is up to. With few exceptions, institutions such as the Cato Institute have deserved respect over the years for this consistency.

Which is the point of this commentary: let's all be more consistent. Either we are against government spending and bureaucracy in all its forms, including surveillance programs, or we are for some and against others. Consistency in this regard at least has the therapeutic affect of revealing radio talk show rhetoric for what it is...pure rhetoric.

So what can be done to reconcile privacy and security? Require Foreign Intelligence Security Act (FISA) courts to hear privacy advocates, not just security lawyers, before issuing a warrant for surveillance as required by the Fourth Amendment.

Require NSA and other intelligence collectors to be more honest with Congressional oversight committees and those committees to be more vigilant in doing their jobs.

Require presidents and their administrations to exercise more control over the intelligence collection services. (Will we ever know whether President Obama himself knew of the vast collection being carried out by NSA before the Snowden revelations?)

And finally, require applications to FISA courts for surveillance warrants to identify specific targets with specific, but renewable, time limits and very specific showings of probable cause for suspecting those targets.

In the wireless age, cell phone users must understand that their conversations are being broadcast and thus subject to off-the-shelf Radio Shack technology intercepts. One suspects that al Qaeda operatives have figured this out some time ago. Though it seems confusing at best, there is and will be less privacy in wireless communications than those on more secure land lines.

Which points to an ugly truth: government intelligence services are not the only ones hacking our conversations and communications. There is a vast underground network of private hackers intruding on our privacy in massive ways. Shut down the NSA and you have still not secured your privacy. Welcome to the 21st century.

The age of communications, mass social media, ubiquitous technology, and of mass interception (and thus of Snowden) is a new world...and not an especially brave one. Advocates and policy makers on both sides--security and privacy--are staking out their positions and the balance required for an advanced 21st century democracy has yet to be struck. Expect the as-yet not very productive debate to continue. Out of the polarized pro-surveillance/anti-surveillance struggle some new rules will eventually emerge. And hopefully they will work...at least for a while.

But then, some years down the line, there will be a new threat, a new technology, possibly a new government agency, and the cycle will begin again. Security is the new oil. Remember the closing scene in Three Days of the Condor. The CIA man (Cliff Robertson) tells Robert Redford's Joe Turner that of course the renegade CIA unit was pursuing oil: "The American people want oil and they want us to get it for them. They don't care how we get it. They just want us to get it."

(Gary Hart is a former US Senator. He blogs at huffingtonpost.com where this column was first posted.)