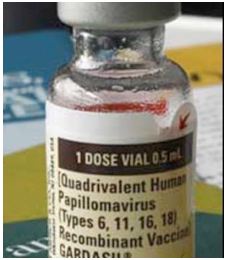 CERDAFIED-Recently the lead researcher of the Human Papillomavirus (HPV)

vaccine, Dr. Diane Harper, decided to clear her conscious at the 4th International Conference, in Reston, Virginia, about the lack of effectiveness and high risks of the HPV vaccines Gardasil™ and Cervarix.™

Dr. Diane Harper stated, “About eight in every ten women who have been sexually active will have HPV at some stage of their life. Normally there are no symptoms, and in 98 per cent of cases it clears itself. But in those cases where it doesn’t, and isn’t treated, it can lead to pre-cancerous cells which may develop into cervical cancer.”

As I previously reported, cervical cancer is usually treatable, with early detection. The Papanicolaou (Pap) test has been a great screening tool and in the United States a relatively low number women die of cervical cancer (approximately 3700) yearly compared to other countries.

Serious side effects, from the vaccine, that have been reported.  Japanese medical institutions are now required by law to inform young girls or their parents that the government does not recommend the vaccines any longer because of their associated adverse effects.

The Vaccine Adverse Event Reporting System (V.A.E.R.S.) reports that 15,037 girls have reported adverse side effects from Gardasil alone, as of June 2013, and 47 girls are officially known to have died.  This number reflects parents who were willing to undergo the difficult requirements for reporting adverse reactions. See video of personal testimony regarding the side effects of the vaccine.

Too many countries are pushing the vaccine on girls as young as 9 years old, even though they are not sexually active and are much younger than those who participated in the trial of the vaccine. The U.S. through the CDC … has made the HPV vaccine available through the federal Vaccines for Children (VFC) program in all 50 states. It is time to stop marketing these products and experimenting on our daughters.

The manufacturers admit that the vaccine works on only 4 out of 40 strains for a specific venereal disease that dies on its own in a relatively short period.

A 2011 Annals of Medicine review found:

There were seven trials, enrolling a total of 44,142 females, given either 3 doses of the HPV vaccine or a placebo of aluminum. Yes, aluminum! Not harmless sugar. It was no wonder that the control group presented itself with the same rate of adverse reaction.  Why would a company use an aluminum placebo?  First, because the government does not regulate what the content of the placebo is. Second, if the placebo itself causes adverse reactions, the final analysis will always be misrepresented.

It is so egregious that Big Pharma is willing to give a known neurotoxin to a large group of healthy females and that our so called compassionate, altruistic, humanitarian type doctors prescribe it, while our politicians vote frequently to mandate them. We have to wake the hell up!

Current research strongly implicates aluminum as the cause of various neurological and autoimmune disorders in both humans and animals. Aluminum is now routinely being used as a placebo in vaccine trials and is not only inappropriate, but should result in a class action lawsuit to stop the practice of it.

It is paramount that we stop manufacturers from producing their own studies. It is unethical and a violation of human trust.

● Truth Behind the National Vaccine Injury Court with Mark Blaxill