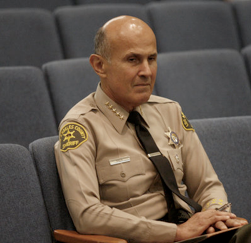 POLITICS-We stand on the precipice of a crisis point in the massive Los Angeles County Sheriff’s Department. Whether or not Lee Baca’s fifteen years of service as sheriff has cultivated or simply existed alongside the current negative culture within the department, it is clear that we are in dire need of a fundamental change.

Over Baca’s last four-year term, the stories of deputies forming jailhouse clicks, the brutal treatment of people in custody, and the general dehumanization has gradually begun bleeding together. It’s almost getting hard to distinguish one tale of disappointment from another and that, in and of itself, is dangerous.

The danger is that the corruption, questionable shootings, jailhouse violence, and general poor choices made by individuals or units are becoming less shocking to the public and more a routine storyline for the department. Our ability to discern one shocking incident from another has gradually blurred the lines and the general impact of these multiple stories is the feeling that this is departmental problem and not a series of isolated, shocking incidents.

That’s not fair. There are far more good people working in the sheriff’s department than bad. More of our deputies are committed to maintaining a safe and fair community than there are ‘cowboy’ deputies riding above the law.

Our problem is one of public trust and it is more a sense of general unfairness than anything else. It is the tone of the department more than it is the everyday danger the public encounters with individuals from the department. In other words, we aren’t actually in danger as a public when dealing with the sheriff’s department, but the sense is that we are.

Sheriff Lee Baca is not an awful person. He doesn’t lead a department with the intent of fostering any sense of corruption and his personal belief system as expressed over the past 15 years has always been one of care and concern for the community.

And so we are at a tipping point. The lack of effective leadership at the top has fostered enough false proof for the public to fear the routine interactions with the department. That’s why we need a new Sheriff, someone who can start rebuilding the public trust that is vital for the department to function well. We need someone with a stellar reputation in law enforcement from outside the department to assume control of the department and begin healing the relationship we have.

We need a new sheriff in town.