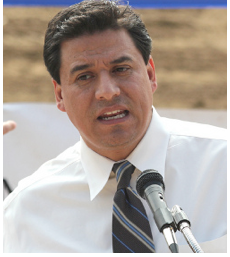 POLITICS AND SCANDAL-When he was named to the prestigious board of Princeton University, then Los Angeles School Board President Jose Huizar spoke humbly of how far he had come in his American immigrant dream story — from his roots in Zacatecas, Mexico, to policy-making at one of the country’s leading Ivy League schools.

It was just part of an altar boy image that made him look like a Latino politician of a different stripe when he was elected to the Los Angeles City Council in 2005.

But that image is in shambles today after a former top aide filed a sexual harassment lawsuit last month to which LA city councilman Huizar, 45, had little choice than to acknowledge he had had an affair with the woman, though he denied harassing her.

Huizar’s fall from grace was just the latest in a long string of politicians who have been caught in sex scandals, a faux pas that has become so widespread in American life that it led to a hit CBS television series, “The Good Wife.”

But the sex scandals involving Latino politicians is particularly disturbing for Hispanics for whom every political victory is precious and every fall so damaging as they try to earn their rightful share of political power in the country.

As the popular blog “Highland Park 90042” in Huizar’s district wrote when the most recent scandal broke:

“This is a sad day for (Council District) 14. As if this district doesn’t have enough problems already. And while the only corruption known at this point is matrimonially, it says a lot about someone’s character, especially when they regard themselves as a devoutly religious family man.

“Much like Villaraigosa, the rest of Huizar’s term will be tarnished, and his future plans to run for his third term will depend on his personal problems instead of his accomplishments as a City Councilmember.”

In Los Angeles, it was unavoidable for the Huizar affair not to remind residents of the 2007 sex scandal that also shattered the well-groomed image, not to mention the marriage, of former Mayor Antonio Villaraigosa.

Once a rising star in Democratic politics, Villaraigosa’s standing was never again the same, and some speculated that the scandal may have contributed to President Obama passing on him for a Cabinet appointment in his second administration.

The most famous of Latino politicians caught up in a sex scandal, though, was former San Antonio Mayor Henry Cisneros, who became the first Latino appointed to a Cabinet position when President Bill Clinton named him secretary of Housing and Urban Development in 1993.

But an affair from his time as mayor eventually doomed Cisneros.

In 1997, he was indicted on 18 counts of conspiracy, giving false statements and obstruction of justice for lying to the FBI about the extent of the affair and was forced to resign.

In a plea agreement, Cisneros pled guilty to a misdemeanor count of lying to the FBI, and was fined $10,000 but did not receive jail time. What makes the fall from grace so hard on Latino politicians, says attorney Alex Jacinto, is that so many of them represent areas that are heavily Roman Catholic.

“There’s almost an immediate erosion of faith, if not support, from their base of Latinas – many of them Guadalupanas and other parishioners who don’t take infidelity lightly,” says Jacinto, who works closely with Catholic parishes on the Los Angeles Eastside.

The former aide, Francine Godoy, alleges that Jose Huizar waged a ‘campaign of retaliation” against her after she turned down specific requests for “sexual favors.”

In her lawsuit, Godoy said that in November 2012, Huizar called her on his cell phone and told her he was “parked down the street from her home.”

After joining him in the car, the lawsuit states, Huizar said she would need to be “closer” to him to continue supporting her campaign  for a community college board seat.

When Godoy refused his sexual advances, the lawsuit alleges, Huizar told her he planned to “cancel” an endorsement meeting scheduled for the next day.

“Godoy is someone seeking to damage the councilmember’s reputation because he would not help advance her career as she expected,” said Robert Alaniz, a spokesman for Huizar.

“He has apologized to his wife and family, and he and his wife are currently working on repairing their marriage.”

But will those without vested interests in Huizar’s career be as forgiving?

“What’s up with these Democrat deviant’s War on Women,” wonders Los Angeles blogger Cristy Li, “preying on subordinates for sexual favors to satisfy whatever prurient desires their small minds can imagine?”

(Tony Castro is the author of the newly-released "The Prince of South Waco: American Dreams and Great Expectations," as well as of the critically-acclaimed “Chicano Power: The Emergence of Mexican America” and the best-selling “Mickey Mantle: America’s Prodigal Son." Castro writes for voxxi.com  where this piece was first posted.)