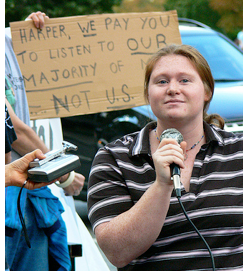 4TH OF JULY PERSPECTIVE - On July 4, 1776, over fifty people signed the Declaration of Independence.

They were openly resisting the legal authority of the King of England.  Thousands joined them.  They were outlaws.  They were breaking the laws of England and risked capture, prison and even death for their belief in independence, equality, unalienable rights, and liberty.  They were far from perfect as slavery, the slaughter and removal of Native Americans and the exclusion of women demonstrated.  But they did resist their globally powerful government.

Who are the true patriots of today?  Not the flag-wrapped politicians who send other people’s children off to be killed or disabled in wars to make the world safe for big businesses. Not the flag-waving profiteers who view their successes as their due.  Not the crowds who chant USA, USA, USA, upon learning of death of Osama bin Laden.  Not the religious hypocrites who worship this nation and its flag as yet another one of their gods.

The true patriots are people like Rosa Parks.  People who courageously resist illegal and unjust actions of government.  They are who should be celebrated today.

Here are a dozen of the thousands who are courageously resisting illegal and unjust government actions.  They risk their freedom to challenge the state for freedom and truth and justice.  They are the true patriots.

Edward Snowden is a 30 year old risking a lifetime in prison to expose massive extensive wrongful secret government surveillance of hundreds of millions in the US and even more globally.

Rosanell Eaton, 92, a 70 year member of the NAACP, was arrested on June 24 in North Carolina in one of the weekly actions resisting government cutbacks and mistreatment of the unemployed.  Nearly 600 others have also been arrested in the last two months in the NAACP led protests.

Tim DeChristopher, 29, was just released from two years in federal prison for disrupting an improper government auction of oil and gas rights around national parks in Utah by making false bids for leases.

Bradley Manning is a 25 year old Army soldier who has been in jail since May 2010 because he exposed evidence of illegal US airstrikes, murder, and other embarrassing confidential political information about the US and other governments.

U.S. Army Private Kimberly Rivera is in military prison in Colorado after she refused to participate further in the illegal war in Iraq and moved to Canada where she spoke out publicly against the war.  Rivera has been described as a prisoner of conscience by Amnesty International.

Sister Megan Rice is an 83 year old catholic nun who is in a Georgia jail facing up to thirty five years in prison.  Sr. Rice was convicted of federal sabotage for peacefully protesting against US nuclear weapons by walking onto the Oak Ridge Nuclear Production facility outside Knoxville TN.  Two who walked with her, Greg Bortje-Obed, 57, and Michael Walli, 63, both veterans of the US military, are also jailed awaiting sentencing.  The three cut through several fences and painted peace slogans on the supposedly secure building storing hundreds of metric tons of nuclear weapon materials to expose and symbolically disarm the thousands of nuclear weapons the US is upgrading, each of which would end life as we know it.

Glenn Greenwald is a hard charging journalist who has been challenging US misdeeds around the world for years.  People in Congress and the media are calling for his arrest on criminal charges for helping expose the truth about crimes by government.

Joy First is a Wisconsin grandmother of five who has been arrested over 30 times for protesting against the Iraq invasion, the war in Afghanistan, the US drone assassinations.

Rafil Dhafir is a NY doctor who is in federal prison after being convicted of providing humanitarian and financial aid to people in Iraq in violation of US sanctions.

Medea Benjamin, cofounder of Code Pink, has been arrested numerous times for challenging injustices by the US and other governments.  Most recently she was thrown out of President Obama’s speech on National Defense after interrupting him by shouting questions about Guantanamo prisoners and drones.

Robert Chantal, 60, is in prison in Georgia for jumping over the fence outside Fort Benning GA to protest the extensive human rights abuses by graduates of the US Western Hemisphere Institute for Security Cooperation (WHINSEC) formerly the US Army School of the Americas, located on that base.  Over 300 resisters have been sentenced for federal crimes in GA for protesting there with School of Americas Watch and many more have been arrested in DC.

Thousands of other people are resisting unlawful, illegal and unjust government action all over the country.

The Keystone XL pipeline resistance has resulted in arrests of over a thousand people in Texas, Oklahoma, Chicago, DC and other venues.

Anti-drone resistance has resulted in hundreds of arrests in Syracuse, Nevada, California, DC and Wisconsin.

Hundreds of immigrant activists have been arrested in protests across the country.

Arrests in DC continue to challenge the holding of prisoners in Guantanamo.

Resisters continue to be arrested at nuclear weapon production and deployment sites in California, Washington, Las Vegas, the Pentagon, Pennsylvania and Wisconsin.

The Occupy movement resulted in the arrest of over seven thousand people.

So, this July 4th, celebrate the true resistance to unjust and unlawful government.

(Bill Quigley is Associate Director of the Center for Constitutional Rights and a law professor at Loyola University New Orleans. This article was posted first at CommonDreams.org)