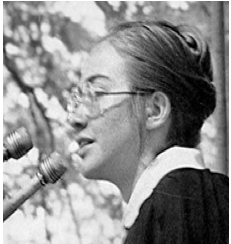 BACK TO THE FUTURE - Before Hilary Rodham Clinton was Secretary of State, or even the First Lady, she was a bright, tenacious student at Wellesley College. Robert Pinsky, three-time poet laureate of the U.S., recalls with nostalgia the young woman who stood up to give a graduation speech but instead declared her disdain for the commencement speaker’s use of “a lot of rhetoric.”

Back in 1969, as she was graduating from the all-girls’ college, she was already a force to reckon with. Pinsky describes his admiration for the young politician and her unfailing presence, likening her command of the room to that of a riveting musician.

Once she was through expressing her disappointment with Republican Sen. Edward Brooke, she went on to say (in what Pinsky calls the “pretty standard language of 1969”):

“ ... a prevailing, acquisitive, and competitive corporate life, including tragically the universities, is not the way of life for us. We’re searching for a more immediate, ecstatic, and penetrating mode of living. And so our questions, our questions about our institutions, about our colleges, about our churches, about our government continue.”

His memoir of the event, which took place in his first year as a poetry professor at the institution, describes a different America—radical, restless, revolutionary—and a very different Hilary.

He ends the piece by stating “But whether or not Hillary Clinton runs for president in 2016, it was Hillary Rodham who pointed the way in 1969.”

This is by no means an endorsement, rather a reminder of who she was, and perhaps, who she could yet again be.