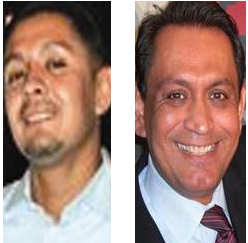 HMG INSIDER REPORT - It pays to have the name Gilbert Cedillo in Los Angeles political inner circles these days.

This past week, Gilbert Cedillo, Sr. was sworn in as a new member of the Los Angeles City Council, a job that will land the former Sacramento legislator around $200,000 annually in salary and retirement benefits.

For Gilbert Cedillo, Jr., the 20-something year old off spring of the political figure, it is paying dividends as well.

Records obtained by Hews Media Group – Community News show that taxpayers have paid more than $22,000 so Cedillo can complete his college education at the Christian based Azusa Pacifica University in the East San Gabriel Valley area.

Cedillo Jr. was taking 39 units during four terms at Azusa Pacific during the 2012- 13 years to obtain a Bachelor of Science in Organizational Leadership/Applied Management.

During that time, Cedillo also worked as the Business Development Manager for Central Basin Water District in Commerce and earned more than $110,000 annually.

According to General Manager Tony Perez, Cedillo Jr. has not been to work for several months but has still been collecting his salary. 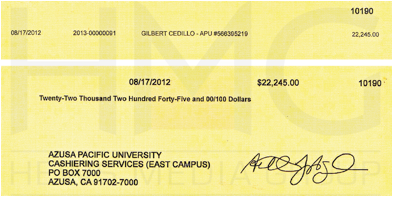 Sources told HMG-CN that Aguilar, with now City Councilman Cedillo, Sr. and State Senator Ron Calderon’s approval, was attempting to groom Cedillo Jr. to be the next CBMWD General Manager.

Cedillo Jr., wrote on his initial application form that he wanted “to continue my education and learn the most effective methods at becoming a great leader and manager.”

“I will also be fulfilling the terms and conditions of my employment by enrolling in this program per GM Art Aguilar’s requirement.  The start date is July 24, 2012,” Cedillo Jr. stated in the Professional Development Authorization application.

Cedillo said that his anticipated graduation date is in October 2013.

The Documents also indicate that Dina Hidalgo, a Human Resources Manager with CBMWD assisted Cedillo Jr., with his application process back in August of 2012.

Hidalgo states in a memo dated August 13, 2013 that it is part of the “conditions of employment for Gil Cedillo, Jr., at the time he was hired for Business Development Manager position on April 18, 2011…he would pursue and complete a Bachelor’s degree in a related area of study to fulfill the requirements of the position.”

Aguilar is also a long time personal friend of the Cedillo’s and the Calderon’s dating back several decades.  Aguilar left in 2012 and since then, investigators with the Federal Bureau of Investigation have been zeroing on the embattled agency.

Perez would not get into the specifics about the current employment status of Cedillo, Jr., during a phone interview last week “I have no comment about Mr. Cedillo, Jr., other than I am currently reviewing his employment situation at this time.”

HMG-CN has learned from several sources that FBI investigators are currently interviewing several key officials at the Commerce based agency.

(Brian Hews is publisher and Randy Economy is editor of the Los Cerritos News … where this exclusive report  was first posted. LCN has a long history of exclusives and exposes. This Insider Report was provided CityWatch by Hews Media Group-Community News.)