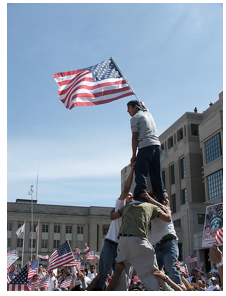 POLITICS - The battle over immigration reform is often about economic fear — fear that immigrants are hurting the economy for native born Americans. But that fear is based on several economic myths:

The nonpartisan Congressional Budget Office finds that immigration reform will actually reduce the budget deficit by hundreds of billions of dollars.

Why is that? Because while they seek citizenship, undocumented workers will be required to pay into Social Security and Medicare even though they won’t be eligible for them.

They’re also younger on average than the typical worker, so even when they’re citizens they’ll be paying into Social Security and Medicare far longer.

The economy doesn’t contain a fixed number of jobs to be divided up among people who need them. As an economy grows, it creates more jobs. And what we’ve seen over the last 200 years is that new immigrants to America fuel that growth, and thereby create more jobs for everyone.

We’ve also learned that new immigrants are by definition ambitious. They wouldn’t have borne all the risks and hardships of immigrating to the United States if they weren’t. And that ambition and hard work help the economy grow even faster.

And why their incomes are higher than their parent’s incomes.

All of which also helps grow the economy and create more jobs.

No economy can survive on a ratio of two workers per retiree.

But because new immigrants are on average younger than native-born Americans, they’ll help bring that ratio back down. They’re needed so we can continue to have a vibrant economy.

Get it? Three wrongs don’t make a right. The right answer is immigration reform is not only good for undocumented workers. It’s also good for the rest of us.