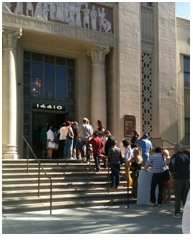 CERDAFIED - The Sherwood Forest Home Owners Association and the Community Rights Foundation of Los Angeles won their appeals before the North Valley Planning Commission on June 20.

Packed like sardines, the anxious crowd made their case for preserving their “beautiful jewel in the valley” from Fred Selan’s massive institutional eldercare facility.

This group of savvy speakers plowed through the associate zoning administrator’s unreasonable and lengthy explanation for approving the project.  Fernando Tovar defended his decision and stated that it was not his job to determine if there was a citywide demand for the project, or to address the compatibility of its design.

His decision to approve the project seemed to rest more on the fact that he was given the authority to make the decision and the rationale that the Eldercare Facility Ordinance would not have been approved by the city if there wasn’t a compelling need.

Tovar almost reprimanded the attendees when he reminded everyone that public hearings had been held on the ordinance and this was not the appropriate time or place to address its flaws.

Tovar was right. At the public hearings the community members should have been leery of any ordinance that gave the zoning administrator the authority to approve a massive project in any zone, even though most of the E.F.O. debate focused on the R-3 zone and greater. Why wouldn’t  the public expect that authority to be abused?

Why would the public expect an ordinance that is written so vaguely to serve the interest of Los Angeles?

Why do we expect reasonable decision making at the planning level when we can’t get it from City Hall when the ordinance is being drafted?

Why does City Hall avoid specifications and providing precise guidelines? It would certainly reduce the gridlock in the planning department and force the community to participate more in the ordinance drafting stage.

Is this an attempt to avoid the voter’s wrath by such vague language and conveyance of authority? If so, why do we let them get away with it?

A number of Neighborhood Councils members came to support the appellants. Each speaker made compelling arguments against the project, showing a sophisticated understanding of the issues at hand.  Most of them were thoroughly disgusted by the ever increasing size of the eldercare facility plans and how it targets the valley’s low density.

The President of Tarzana Property Owners Association, David Garfinkle argued that the Baseline Mansionization Ordinance that applies to the current RA-1 single family home should also apply to any converted uses.  Garfinkle had contributed a great deal of time and effort to the process when the   B.M.O. was being drafted.

Garfinkle: "In ruling on proposed Eldercare facilities in RA zones, Zoning Administrators have routinely ignored the requirements of Section 12 of the City Planning and Zoning Code, amended, in response to the Baseline Mansionization Ordinance which was passed subsequent to the adoption of the Eldercare Ordinance and thus supersedes that ordinance.  The total buildable area for structures on RA properties greater than 25,000 square feet is 20% of the property size plus up to 650 square feet for a garage,  porches and breezeways, and bonuses of 20% for “Green” structures or structures meeting certain setback conditions.

“Each of the proposed Eldercare facilities was at least three times the Code allowance, yet was approved by the Zoning Administrator, only to be overturned in each case by the appropriate Area Planning Commission."

Irene Boyd, who crafted an excellent appeal, was out of the country at the time of the hearing. When she heard the good news she said, “What a wonderful victory and also what a wonderful example of what team work, good research and writing, planning, organization, and community involvement plus the willingness to speak up and not bow to pressure can accomplish! We went up against a "politically connected" group that told us from Day 1 that we had no chance at all of defeating them.  HA!  As Lisa Cerda said at the June 4 community meeting:  Don't let ANYONE tell you that you don't have a chance of winning!”

The only speakers for the applicant were paid professionals. They actually did more harm than good.

One speaker, who had gathered signed petitions, had at least one known forged signature on it, leaving the local residents to wonder if their names had been forged as well.

Another speaker, spoke about the aging populace and the high demand for institutional care, all the while a clever audience member looked up her website and read her statements into the record that contradicted her prior remarks.  Her recommendation on her website suggested; Home modifications and in home care to allow the elderly person to thrive versus institutional care.

Mitch Englander’s Senior Planning and Transportation Deputy, Hannah Lee, delivered a crushing blow to the applicant when she read Englanders statement of support for the Sherwood Forest Community. The audience barely contained their grateful cheers and applause for his support.

The North Valley Area Commission swiftly granted our appeal based on the lack of compatibility due in part to its bulk, size, and design elements. They noted it was out of character with the neighborhood.

Next: The community of West Hills battles a 204,000 sq ft Eldercare facility on August 22 at the S.V.A.P.C. It will be situated next to a quaint historical site, the Canoga Mission Gallery, a 1930’s stable that was being utilized as an art gallery for many years and is currently an art and hand craft boutique.  Like all the other eldercare applications, it too plans to be abutting a pristine, low density neighborhood.