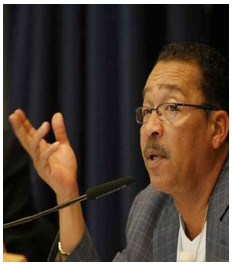 NEIGHBORHOODS - “Great Balls of Fire”—I’m probably dating myself by using that Jerry Lee Lewis song lyric, but it best describes three things that happened in the last two months with Neighborhood Councils that have made me both incredulous and optimistic!

First let me introduce myself so you may put things into perspective.  For full disclosure, I am 2nd Vice-President and Outreach Chair of the Tarzana Neighborhood Council. My prior life involved being an international business person in developing countries, so I have seen almost everything that can happen in government.  Since the Neighborhood Council system is one of the best-kept secrets in LA civic life, here is a little background.

The voters approved a City Charter in June 1999 and established a new agency to oversee Neighborhood Councils called the Department of Neighborhood Empowerment (DONE).   Following that vote- a plan was approved in 2000.  It wasn’t put on the ballot because all of a sudden the Mayor or City Council decided they wanted input from the Los Angeles stakeholders. It was a response to the almost successful 1998 San Fernando Valley succession effort from the City.

Undoubtedly, by allocating some funds, giving very strict guidelines (Brown Act, et al) it was thought to keep activists, who had spear headed the succession measure, quiet and content to oversee potholes, have limited input on zoning and planning in their neighborhoods, and work with individual Council office districts.

Neighborhood Councils were supposed to be fragmented, but responsible groups that the individual councilmen could help on some local matters of concern, present certificates of merit and enjoy photo opportunities. No drama was anticipated.

Presently there are 95 Neighborhood Councils (NC’s) representing the four and half million people in Los Angeles. There are 1700 people serving on these Boards of Directors - but with no salaries and limited clout.  Each NC receives an annual budget from the City.  This year and next it is $37,500.  There are very strict controls on how the money is spent. NC’s are elected by their individual neighborhoods for two to four-year terms. Their mandate being to bring individual communities into closer contact with City government, helping to make them better places to live, work and play. NC’s are truly the ethnic, socioeconomic barometer of our communities.

For many years NC’s were fairly complacent good citizens (with some exceptions). Boards of Directors spent hours getting agreement on issues of importance and sending them to the appropriate department.  They formed geographical alliances (power in numbers), and tried to contribute opinions and facts on issues at City Council meetings. Instead of being treated as advisors, they were treated as “members of the public” limited to two minute statements.

That all changed last year. The NC’s started to realize their collective clout and. …stood up and raised their voices. They were able to get the City Council to remove the proposed infrastructure bill from the March ballot.  This Bond Issue had almost no public input and would have raised property taxes substantially to pay the three billion dollar price tag.

The other big change was “Budget Advocates,” made up of representatives from each of the Neighborhood Councils. Lawyers, Doctors, CPA’s, CEO’s, small business owners and regular folks who spent months taking an objective look at the City budget and found multiple ways for the City to not just balance the budget, but also restore services.  It was presented to the Mayor and the City Council, as it had been the last three years, but our elected officials extended this time a modicum of respect.

Now that you have a little of the background you can understand my newly found optimism.

The first came from Council President, Herb Wesson when he addressed the Los Angeles Neighborhood Council Coalition (LANCC) in May. I asked why no representative was picked by him to serve on the newly formed LA 20/20 planning committee he said, “I made a mistake. I told Chairman Mickey Cantor, to select his committee without interference and did not mention he should include the NC’s.”  Can you believe a politician saying he made a mistake (Wesson video)?  Subsequently, several Budget Advocates met with Mr. Cantor. There is no seat at the table yet but they will keep pressing.

The second and third were promises made at the recent June LANCC meeting by newly elected City Attorney, Mike Feuer and newly elected Controller Ron Galperin. They both agreed to meet with the NC’s on a regular basis; to make sure that the NC’s receive information on legislative and financial matters in a timely manner; and to give serious consideration to the NC’s suggestions, and challenges.

Mayor-elect Eric Garcetti made similar promises as a candidate but has yet to confirm them in his position as Mayor elect. He is on a citywide tour to find out from people what their opinions and suggestions are to improve the City. Hopefully he will attend the July LANCC meeting where he may garner even more valuable input from 42 Neighborhoods at the same time. Unfortunately, he was a “no show” at the June Meeting.

The NC’s have asked to be represented on all commissions and committees doing City business.  Mayor elect Garcetti has asked for volunteers.  Hopefully he will keep his campaign promise.   After all, we represent four and a half million people…we are the City!

(Denyse Selesnick is a neighborhood council activist and serves on the board of the Tarzana Neighborhood Council.)