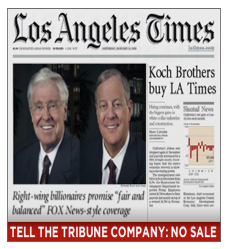 TIMES FOR SALE- In the New York Times, Amy Chozick wrote an interesting piece (4/21/13)  about the libertarian-right Koch brothers' interest in buying the Tribune Company (which includes the LA Times).

Why would profit-seeking businessmen want to buy money-losing newspapers? Chozick reports that "the papers could serve as a broader platform for the Kochs' laissez-faire ideas."

Buying a media company in order to advance your politics might strike some as worrisome, but Chozick has an anonymous source who attended a Koch seminar suggesting that the fears about editorial meddling might be overblown:

One person who attended the Aspen seminar who spoke on the condition of anonymity described the strategy as follows: "It was never 'How do we destroy the other side?'"

"It was 'How do we make sure our voice is being heard?'"

A Koch spokesperson spoke about their "respect the independence of the journalistic institutions" under discussion, and another anonymous source weighed in:

One person who has previously advised Koch Industries said the Tribune Company papers were considered an investment opportunity, and were viewed as entirely separate from Charles and David Kochs' lifelong mission to shrink the size of government.

So it's not so much about promoting a particular ideology at the papers, and certainly not about "destroying" the other side. But how have the Kochs handled media outlets that covered them critically? Andy Kroll of Mother Jones (4/22/13) reports:

One journalist with whom Koch Industries has clashed is David Sassoon, the publisher of InsideClimate News,  a nonprofit website devoted to environmental journalism. InsideClimate News recently won a Pulitzer Prize for its reporting on the dodgy oversight of US oil pipelines.

I asked Sassoon, fresh off his Pulitzer win, what he thought of the news of Koch Industries potentially bidding on the Tribune Company newspapers. "We reported on the Kochs' involvement in the tar sands, and they played hardball to try to shut us up," he wrote in an email. "They pressured Reuters to drop us as a content partner, and ran ads on Google and Facebook calling me liar…. What we've experienced of them firsthand makes me think they would not be trustworthy stewards of the honorable traditions of journalism."

Now, maybe that's not  as exciting as a well-placed anonymous source, but it's a far more revealing glimpse at what the Kochs really think about the "other side."

(Peter Hart is the activism director at FAIR … where this column was first posted. He writes for FAIR's magazine Extra, and is also a co-host and producer of FAIR's syndicated radio show CounterSpin.)