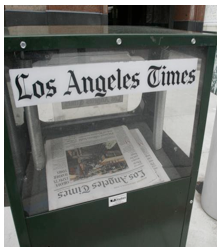 LA MEDIA - The New York Times reports  that the Koch brothers have moved closer to purchasing the Los Angeles Times sent shivers through Angelenos like me who cling to Thomas Jefferson’s admonition about the importance of the freedom of the press.

"The only security of all is in a free press,” Jefferson wrote to Lafayette in 1823. “The force of public opinion cannot be resisted when permitted freely to be expressed. The agitation it produces must be submitted to. It is necessary, to keep the waters pure."

If one questions that the arch-conservative Koch brothers would destroy the already murky waters of the free press in Los Angeles, consider their record as one of America’s most unrepentant polluters and practitioners of cash-register politics.

Before most Americans knew how to pronounce their name, Consumer Watchdog’s Oil Watchdog project rented a jumbo-tron in Times Square with a video to introduce the brothers to Americans and we assembled this rap sheet.

“The Kochs are on a whole different level,” said Chuck Lewis of the Center for  Public Integrity.

“There’s no one else who has spent this much money. The sheer dimension of it is what sets them apart. They have a pattern of lawbreaking, political manipulation, and obfuscation. I’ve been in Washington since Watergate, and I’ve never seen anything like it. They are the Standard Oil of our times.”

To realize this is an understatement, check out the Koch boys’ record on environmental degradation, political manipulation and climate change denial.

At risk of breaking the old adage, “Never pick a fight with people who buy ink by the barrel,” this power play to takeover Los Angeles’ only major journalistic institution has to be stopped.

Here’s how it can and should be.

● This news is sure to light a fire under Los Angeles’ progressive billionaires, and cause them to up their ante for the newspapers.  The Kochs' bet will be a test of their civic pride.

● Not to rely on the will of the billionaires, subscribers will ultimately have to speak up to let it be known that they will kill the paper if it falls into the “Kochs' hands.”  Call it "suicide by subscriber."

● The final say in California will be in the super-majority of Democrats in the statehouse and the will of the people that can sometimes speak through them.  There’s nothing to stop the legislature from passing a bill taxing owners of a major newspaper in Los Angeles with an environmental record like the Kochs' at astronomical rates no respecting capitalist would want to pay, even to corner the free press.

The Kochs just laid down their big bet, will the Jeffersonians in Los Angeles and California answer back? Stay tuned.

(Jamie Court is an award-winning and nationally recognized consumer advocate. He is president of Consumer Watchdog, which has offices in Washington, DC and Los Angeles. This blog was posted first at ConsumerWatchdog.org)